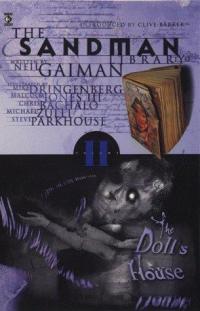 Book Description: A being who has existed since the beginning of the universe, Dream of the Endless rules over the realm of dreams. In The Doll’s House, after a decades-long imprisonment, the Sandman has returned to find that a few dreams and nightmares have escaped to reality. Looking to recapture his lost possessions, Morpheus ventures to the human plane only to learn that a woman named Rose Walker has inadvertently become a dream vortex and threatens to rip apart his world. Now as Morpheus takes on the last escaped nightmare at a serial killers convention, the Lord of Dreams must mercilessly murder Rose or risk the destruction of his entire kingdom.

Collecting issues #9-16, this new edition of The Doll’s House features the improved production values and coloring from the Absolute Edition.

Review: Our revisit of this classic comic series presses on, and now that Morpheus/Dream has reclaimed his power over The Dreaming, he has more work to do! As I continue my re-read I have been struck by how visceral and enchanting “The Sandman” universe is, and while it does still harken to other DC characters and mythos on occasion, we have started to stay firmly within a world of Gaiman’s making. And it is just as engrossing this time as it was the first time.

I don’t know why I waited so long to revisit Dream, The Endless, and the Dreaming, because going back to “The Sandman (Vol. 2): The Doll’s House” really hit home how much I love this series. There’s dark humor, there’s lovely fantastical world building as you get more familiar with The Dreaming (Dream’s domain he rules over) and begin to meet other Endless (specifically Desire in this arc), and there’s an undercurrent of horror to go along with the fantasy. Our main drive this time is that of Rose Walker, a woman who is, unknown to her, a Dream Vortex, and therefore something very dangerous for The Dreaming as her very existence could damage it beyond repair. On top of that, a few of Dream’s Nightmares have escaped, and are wreaking havoc in different ways. In this volume Dream is still trying to re-steer his ship after his captivity, and we see just how far the damage of his absence has  gone. Rose has her own mission, and it is to find her little brother, who has gone missing. With the help of a mysterious but kind man named Gilbert, Rose goes looking for her brother, just as Dream starts looking for her. We see a few callbacks to other parts of “Preludes and Nocturnes”, which were done in slow and subtle ways, which made them feel all the more satisfactory as they were peeled back and revealed. The dreamlike atmosphere of this series is still present, as is the darkness. This time that horror aspect is in the form of a ‘Cereal Convention” that Rose and Gilbert stumble upon, which is actually a gathering of serial killers that are hoping to share insight with each other. I had forgotten how twisted this entire thing was, and let me tell you Gaiman doesn’t hold back. To the point that I really feel a need to give a content warning for abuse and sexual assault (and also a note that there is descriptions of violence against trans people in particular. Which felt very problematic but also very of the time that this series was going).

But once again, it’s a standalone story that has a lot of philosophical oomph and a lot of heart that stood out to me in this volume. While the arc of Rose Walker and the ‘cereal’ convention is definitely stellar, it was the story “Men of Good Fortune”, in which Dream and Death decide to give a man named Hob Gadling eternal life after they hear him waxing philosophical about mortality in a pub in 1389. Every hundred years, Hob and Dream meet at this pub, and Hob tells Dream about what he is doing with his eternity. There are highs and lows as Hob experiences the evolution of London, and we get to see how he changes the direction of his life and how it leads to success and devastation. What struck me the most about this story, outside of seeing how one person might shift and evolve with the world they live in were they to have eternity to do so, is that Hob and Dream are an unlikely set of friends whose friendship feels natural and touching. I remembered that Hob pops up here and there throughout the series, but I had forgotten how lovely his introduction was.

The art is still excellent. We’ve started to see more experimentation in design, style, and placement, and while sometimes there is a very traditional art style (like in “Men of Good Fortune”), sometimes it is very abstract. It really just adds to the flavor of the atmosphere that they’re all trying to create, and for the most part it works.

“The Sandman (Vol.2): The Doll’s House” opens up the series to more possibilities, and more darkness. You can tell that this is something very special on these pages.

Rating 9: More chills and world building along with introductions to more of the Endless, “The Sandman (Vol. 2): The Doll’s House” keeps the horror elements up while also showing moments of true tenderness.

“The Sandman (Vol.2): The Doll’s House” is included on the Goodreads lists “Great Non-Superhero Graphic Novels”, and “Psychological and Philosophical Comics”.

Find “The Sandman (Vol.2): The Doll’s House” at your library using WorldCat, or a local independent bookstore using IndieBound!