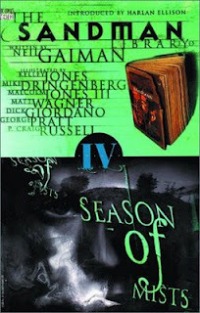 Book Description: Ten thousand years ago, Morpheus condemned a woman who loved him to Hell. Now the other members of his immortal family, The Endless, have convinced the Dream King that this was an injustice. To make it right, Morpheus must return to Hell to rescue his banished love — and Hell’s ruler, the fallen angel Lucifer, has already sworn to destroy him.

Review: Up until this point, “The Sandman” has been a combination of vignettes, massive world building, and showing how Morpheus/Dream is adjusting to trying to rebuild The Dreaming after his captivity. I think that it’s safe to say, however, that we don’t really know THAT MUCH about Morpheus as a character in terms of his wants, desires, and personality. He’s a deity of sorts. He’s a bit grumpy. He can be vengeful, or merciful. But in “The Sandman (Vol.4): Season of Mists”, we finally get to see him grapple with some very tough decisions, as well as having to look inwards and grapple with his own demons and mistakes. After a meeting with the other Endless, aka his siblings, Morpheus is taken to task by Death for banishing his former lover Nada to Hell after she refused to marry him and rule The Dreaming by his side. Realizing that he did something reprehensible, he decides to go to Hell, confront Lucifer Morningstar, and see if he can set her free. You think that the story you’re about to read is going to be a great battle between two powerful beings, and that it’s going to be a focus on the big fight between the two to save Nada.

But instead, when Dream arrives to confront Lucifer…. Lucifer quits his mantle as the ruler of Hell, and tells Dream that he is now responsible for what happens next to his former kingdom.

So in a great twist and subversion, now Dream has to hold court to those who would want to take Hell over, and The Dreaming becomes host to Gods, Goddesses, Deities, Demons, and others who all think that they should get this prime real estate. Frankly, I loved that this was the main conflict. Seeing Morpheus have to bring all of these beings into his home and to let them say their piece, and then have to do some critical thinking about the pros and cons of giving one of them Hell (through sucking up, threats, or bribes no less), was such a fascinating turn of events. We get to see Gods from various mythologies come in, from Odin to Anubis to Bast to Susanoo-no-mikoto, Gaiman gives all of them a reason to want Hell for themselves. It also gives Dream time to think about what kind of terrible fate he left Nada to. That was actually the greatest weakness of this arc, in that things with Dream and Nada is almost resolved too quickly and easily. I liked seeing Death read Dream the Riot Act about how AWFUL he was to her. It doesn’t sit as well these days for MANY reasons (given that she was also of African royalty, so seeing Morpheus subjugate a Black woman just feels all the more tone deaf and problematic). But over all, I really liked this entire arc, and feel that this is where “The Sandman” has finally become it’s own thing, even more so than “The Doll’s House”.

But more significant for me within the whole of “The Sandman” mythos and universe is that this is the collection in which we finally get to meet Delirium, the youngest Endless and my number one favorite character in this series. Sure I’ve sang the praises of Death, and while she is my number two gal, Delirium holds the key to my heart. I love her so much that in 2015 I was her for Halloween.

Along with the intros of Delirium and Destiny, we get to see the Endless interacting with each other, and seeing the power dynamics, as well as hints towards a missing Endless, but more on that in later collections. They are definitely dysfunctional, but you at least get the feeling that they, mostly, care for each other, as well as otherworldly godlike beings can (though Dream seems to have no love for Desire, which is fair as Desire is the wooooorst in many ways). This extended scene felt natural and was incredibly charming.

As I’m sure you noticed above, there are SO MANY illustrators with this arc, and they all added something unique to each story. But once again my favorite is the one that deals with the Endless, with illustrations by Dringenberg and Jones. The dreamy details of the Endless as they confer and debate really made me feel like I was in a strange place between worlds.

Rating 9: A fascinating and twisted (yet also somewhat lighthearted) storyline that brings together many myths and legends, “Season of Mists” gives Morpheus a lot to think about in terms of fairness, and his own culpability in monstrous acts. We also meet my favorite character in the series.

Find “The Sandman (Vol.4): Season of Mists” at your library using WorldCat, or a local independent bookstore using IndieBound!