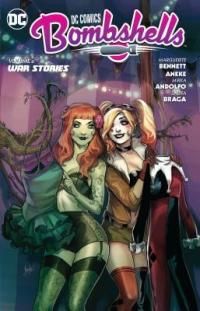 Book Description: The ultra-popular statues from DC Collectibles come to life in their own ongoing hit comic book series, now in its sixth and final installment!

The Bombshells face their final battle as a supernatural Nazi invasion begins! On top of that, Hugo Strange unleashes his failed lab experiments on Harley Quinn and Poison Ivy’s circus and Lois Lane has her chance to avenge her family on the villain — will she take the shot? Amid the chaos, discover Lex Luthor’s true colors as he reveals which side he’s really on, and what that means for the future of the Bombshells!

Review: I didn’t realize it when I reviewed our previous “DC Bombshells” Collection that “War Stories” was the last in the first large series within this alternate historical universe starring the awesome ladies of DC. I also didn’t realize that the second series, “DC Bombshells: United” was cancelled about a year into it’s run. Trust me, if I had known these things when we last visited this series, I would have gone on a long rant. In fact I’m pretty sure that I will be ranting before this review is through. But for now I’m going to try and focus on the big finale and pretty solid wrap up that was “DC Bombshells: War Stories”. Let’s see how long it takes me before I start going off. I’ll try to keep my cool.

When we left off, Ivy and Harley were in Russia helping civilians out, Raven had stowed away with them to try and find her father, Zatanna and Constantine were trying to find her, and Kara and Lois Lane had tracked down Hugo Strange and found that he’d used some of Kara’s DNA to make a clone of her, whom he called Power Girl. Also there was another captive they rescued, named Superman. And The Suicide Squad showed up, led by Batgirl and including Frankie, Killer Croc, Enchantress, and Ravager. So in this volume, all of these stories come to a head. Sadly, this means that Wonder Woman, Batwoman, The Batgirls, and Mera are all absent from this final volume in this large arc/first series, and to me that didn’t sit right. I know that all of them are going to have more to do in “DC Bombshells United” as the focus turns to the home front and the ills the American Government commits against it’s own citizenry, but this was a significant end and shift, and I think they should have shown up in some capacity. But the stories here as they are are all pretty satisfactory in spite of this glaring absences. I especially enjoyed the Suicide Squad mission, which took our team into a German Sub in hopes of finding Luc, Batgirl’s long lost paramour. I liked this storyline  because while it continued the themes of Nazi occultism and mystic plotting, we got to see Edward Nygma and a few Lovecraftian-esque threats. Plus, this Suicide Squad is pretty excellent, all of them with a 1940s flair, which means that in my mind Killer Croc has a Mid-Atlantic accent and that just tickles me. Along with this already bonus storyline we get another one involving some of the Batgirl of Burnside characters, mainly Frankie, Qadir, and Nadimah dabbling in some magical mischief. It was a one off and didn’t really add much to the overall plot, but it was still enjoyable and fun to see more characters appear in this alternate timeline.

The climax of this series, however, comes with the Battle of Leningrad, as the Bombshells have to come together to not only fight Hugo Strange, Killer Frost, and the Nazis, but to try and save Leningrad and the people there. I liked seeing all of the ladies come together in one place, and I felt like they all got some decent moments to shine within this final battle. That said, it wouldn’t be a pivotal battle of a series if there wasn’t some sadness and sacrifice, and while it never reaches levels of Stargirl loss here, there are definitely repercussions and moments of sadness for some of our characters, which all were executed with deft emotion and feeling. What I love about this series is that it shows that sadness and pain are not weaknesses in our characters,, and it’s refreshing to see that some characters do get lost in their emotions, both in good ways and in bad ways. But even when it’s in bad ways you never get the sense that these emotions are bad to have, just that they need to be used in less destructive ways. Its a theme we see a lot in these stories and it makes me wonder if a comic that was starring the males of DC would be so bold as to take that stance. I think I know the answer to that, sadly.

And finally, there is a whole new threat that comes from the Russian side and brings more storyline to Kara and her origins: Faora Hu-El from Krypton has arrived once more (seen previously WAAAAAY back when Supergirl and Stargirl were being used as Russian Propaganda), and boy has she brought some serious baggage to our finale. And since I want to discuss it here, this is our SPOILER ALERT moment that almost always pops up in this series. One of the things that “DC Bombshells” has done is made this universe and it’s characters and storylines very female centric, and that has altered some backstories here and there. The biggest alterations to date are pretty Kryptonian centric. Not only is Superman a clone of unknown origins created in Strange’s lab (as far as well know at this juncture), Kara’s own origin story is shaken up with the arrival of Faora, who tells her that she is a perfect being created by Faora, Alura, and Lara. It’s pretty neat and ballsy to reveal within this final battle that Supergirl, the last true Kryptonian (given Superman’s new origin) and most powerful being in the story,  is the product of three women and Kryptonian science. I have this image of ‘well actually’ toxic nerdboys pitching a HUGE fit about this. But that’s what “DC Bombshells” has always been about: it’s about women at the forefront, women supporting and loving and fighting women, and women as the main components of a story, with guys playing the traditional roles that women have played in comics for years. Frankly, it’s genius.

Which is ALL THE MORE REASON THAT IT SUCKS THAT DC HAS PULLED THE PLUG. Representation in comics is so important because representation in all types of media is important. With women being in the lead, women of all races, religions, and sexual orientations, “DC Bombshells” has been one of the best comic series DC has when it comes to representation (especially since apparently “Batwoman” is ALSO getting axed! Sure, I wasn’t a fan, but BATWOMAN IS IMPORTANT)! DC is still going to toss a whole lot of bank into it’s middling AT BEST movies (“Woman Woman” not included, and holy SHIT is THAT ironic given the context of this rant) and keep rebooting Batman and Superman over and over AND bastardize Alan Moore’s “Watchmen” universe for funsies, but it can’t throw a bone to a series where women are at the forefront and aren’t sexualized and objectified through a male-only gaze? IT’S UNACCEPTABLE!!!!

Well, regardless, this first arc of “DC Bombshells” comes to a solid close in “War Stories”, and while I know that “Bombshells United” isn’t as long, I’m going to really, REALLY savor it as I make my way through. These DC women continue to create a better world filled with compassion and justice, and I know that even though it’s ending that won’t change the importance of this series as a whole.

Oh, and is Black Canary going to show up in this next series? Asking for a friend.

Rating 8: A solid and mostly satisfying end to the first major arc of the “Bombshells” comics, “DC Bombshells: War Stories” is a wrap up with most of the characters we love, though a few notables were missing and it was very noticeable.

“DC Bombshells (Vol.6): War Stories” is included on the Goodreads lists “2018 Lesbian Releases”, and it would fit in on “Diverse Heroes in Comics/Graphic Novels”.