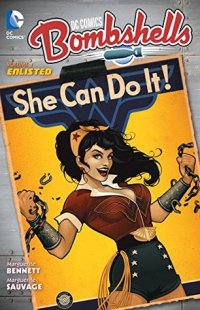 Where Did I Get This Book: The Library!

Book Description from Goodreads: In these stories from issues #1-6 of the hit series, learn the story behind this alternate reality where the Second World War is fought by superpowered women on the front lines and behind the scenes! It all begins with the stories of Batwoman, Wonder Woman and Supergirl.

Review: Last year our friend Anita and I went to the local Wizard World Comic Con Convention. When we were walking around the merchandise area, we saw these really cute posters of DC superheroines drawn like retro WWII-era Pin Ups. I had no clue what the story was with them, but had to get the Black Canary one for my house.

So when I got to work one day, I went to check out the new materials wall. And what did I see? “DC Comics: Bombshells (Vol.1): Enlisted”. Needless to say I ran over to the book and grabbed it for myself.

The Goodreads summary doesn’t really do this justice, so here is mine. Set in an alternate universe, “Bombshells” is a WWII era historical fiction arc starring a whole lot of DC’s superheroines and supervillainesses. Various governments and groups start recruiting these women so they can fight for their countries, or the group’s motivations. You have Batwoman, an All American Girl’s Baseball League player who is recruited to be an American Spy. You have Wonder Woman, a Amazonian princess who meets WWII flier Steve Trevor when he crashes near her home, and she and her bestie Mera decide to bring him home, but get the attention of American forces. Supergirl and Stargirl are living in Soviet Russia, who are discovered to have serious powers that can be used as Soviet Propaganda. Zatanna is being pressured into working with the Joker’s Daughter in Berlin, standing aside helplessly as Joker’s Daughter gives the Nazis magical, zombie making powers. And then there’s Harley Quinn, who has forsaken her medical prowess in London and flies into France in search of her boyfriend, only to find Pamela Isley, a possible French Resistance Fighter.

Does this sound amazing? GOOD, BECAUSE IT IS!

There are many things to like about this comic. First and foremost, the concept is super creative. The idea kind of sounds like an alternate universe fan fiction idea, but Marguerite Bennett’s writing makes it work so well. She takes a lot of things from WWII history, like the All American Girl’s Professional Baseball League, or the Soviet Night Witches, and gives them a very cool platform to bring them to the forefront while producing some really intriguing storylines. While I loved all of them, I think that the one of my favorites was definitely that of Supergirl and Stargirl, as the story not only talked about the Night Witches, it also showed the brutal regime that the Soviets had in spite of the fact they were our allies. The part that punched me in the gut the hardest was when Supergirl and Stargirl realize that they are supposed to be attacking a camp that, while disguised as a Nazi Camp, is actually a Soviet Prison camp, with political prisoners of all ages being held there. It was super ballsy to address that and to give these girls a serious moral dilemma. And I also liked the Harley Quinn and Poison Ivy storyline, because if it does go the way of the French Resistance, that would be super cool. The Resistance is getting more play in literature lately, between “Code Name Verity” and “All the Light We Cannot See”, so if it gets a fun story in this comic I will be very happy. The banter is also quite zippy and fun to read, and the dialogue feels natural and not stilted. I found it very feminist and woman centric without being heavy handed or on the nose.

Another aspect I liked is that through this story, DC is giving a lot of great fun and great opportunities to their lady characters. While I love DC guys a whole lot too, the fact that there was no sign of Batman, or Superman, or any of the other heavy hitters, was very refreshing. You see a couple guys, namely Lex Luthor and John Constantine. But Luthor is a fellow spy who is teamed up with Batwoman and Catwoman, and Constantine is more of a sidekick to Zatanna.

Like I said, I like the men of DC. But honestly, if they start to come in and play a bigger part I will feel a little miffed. This is the time and the series to let the ladies shine.

And the story is just fun. I was screeching in glee as I read this volume, and actually had to put it down and run off to tell my husband about a certain cameo that appears late in the game. No spoiling it. But it was a hoot to see this character, even if it was for just a moment.

“Bombshells” is a fabulous series and I need Volume 2 yesterday. It isn’t coming out until September, so I am just going to have to wait, I guess. Probably not at all patiently.

Rating 10: This comic is everything. I had so much fun while reading it and I cannot wait for the next one. Fans of comics, WWII fiction, and kick ass ladies need to pick this one up!