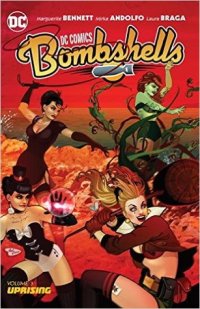 Book Description: Based on the hit DC Collectibles product line! As World War II rages across Europe, the Allied forces issue a call to arms for the greatest heroines the world has ever known! With an old villain arising from beyond the grave, Wonder Woman, Batwoman, Kara Starikov, Kortni Duginova and Mera must aid the Allied forces while at home, a brave group of Batgirls must defend the homeland!
The incredibly popular DC Collectibles line is brought to life in these stories that reimagine the course of history! From writer Marguerite Bennett (BATGIRL, EARTH 2: WORLD’S END) and featuring artists including Marguerite Sauvage (HINTERKIND), Laura Braga (Witchblade) and Mirka Andolfo (Chaos) comes DC COMICS: BOMBSHELLS VOL. 3.

Review: With the way that the last “DC Bombshells” collection ended (if you’ll remember, it was devastating), I was wondering if we were going to get into more pathos in which we’d have to potentially say goodbye to another of our beloved heroines. I suppose that I should have steeled myself for that possibility from the get go, as this is WWII and with war comes death. And given that our ladies are spread out across various fronts, battling not only Nazis, but also Nazi Zombies, the stakes are pretty high. And we jumped right back into it.

But first, we went back to the home front to check in with the Bat Girls! They’re continuing there time of taking up the mantle for Batwoman while she is overseas, and this time they have a new ally to go along with Maggie Sawyer.

Seeing Lois introduced (and giving her a very interesting backstory that gently but deftly touches on the immigrant experience) was a serious treat for this Lois Lane fangirl. It was also great seeing her jump in without having to worry about needing help from Superman (still nowhere in sight), and helping the Bat Girls break up a crime ring (involving the Penguin!), though they find themselves wanted in the process. Seeing this and a non-Two Face-d version of Harvey Dent going on and on as a political candidate with an “America First” platform made this story feel pretty close to home.

But meanwhile, in Europe, we catch up with our Bombshells on the front lines. We don’t get to see Wonder Woman, Supergirl, or the aftermath of Stargirl’s death this time, but that’s okay by me. I’m not ready to see the fallout from that. But that isn’t to say that we have a lack of stories this time around, as we are juggling a number of story lines. We have Batwoman, leaving Wonder Woman and Stargirl to try and get back to the front lines, who meets up with an old flame, Renee Montoya (aka The Question). They first met during the Spanish Civil War, and fought on the rebel side against the fascists. Now they are teaming up again, in spite of bad memories of losing a young protege and friend named Jacon (YES AS IN JASON TODD I AM SCREAMING) and the end of their love. You have Zatanna, who has been sent to a ghetto because of her Jewish and Romani heritage, and is being tormented by Joker’s Daughter, who has taken away her powers. You have Mera, who has washed up in Ireland without her powers, banished from Atlantis and her rightful throne. And we finally come back to Harley and Ivy, who have become freedom fighters for the resistance, and have found love with each other as they try to make their way to Berlin to take down the Nazis from their home base. And I haven’t even mentioned Huntress, Miri Marvel, Joker, Catwoman, Raven, and Aquaman, who all make appearances as well.

It’s definitely a lot to balance. But Bennett does a really good job of slowly but surely weaving all of these stories together. It was SO lovely to see my girls Harley and Ivy again, and to see how they play into this whole thing. I was wondering how it was all going to fit together, but it does. I was also really relieved that even though we did get a bit more romance with some of the heavy hitting men of the Universe (Aquaman and Constantine, specifically), it didn’t bring down Mera or Zatanna. Even though Mera has found lighthouse keeper Arthur, there is no sign of him having powers that are going to outdo hers as of yet. Their romance is just another part of her as a person, but Mera remains Mera and isn’t distracted from her goal of getting her powers and Atlantis back. The same can be said for Constantine, who is in the ghetto with Zatanna. He is there to support her, but his presence doesn’t weaken her or make her seem like he is her only strength in a horrific situation.

I loved seeing all of these women come together to fight against Joker’s Daughter and the Nazis, and that a number of these women in this story are Jewish or of Jewish descent, as Batwoman, Zatanna, Miri, and Harley all make mention of their heritage while they are inside the ghetto during a shabbat dinner. There was great beauty in this entire moment, as it wasn’t solely a ‘savior’ moment, as these women are also targets because of their heritage. The symbolism was bittersweet, and I really appreciated it. It was also good seeing the concept of abusive and controlling relationships being addressed, and not just in romantic ways. There was a small moment with Harley and Joker as she tells Ivy about her past, but there is also the relationship between Joker’s Daughter and Zatanna, and the relationship between Mera and her former beau. There is also poor Raven, who has only known Joker’s Mother as her mother figure, and is so damaged in her need to please her but also her need to escape. These are things that women in real life have to grapple with, and I so appreciate that this series dares to bring up the toxicity of relationships like these, and contrast them with healthy relationships. Harley finds Ivy. Zatanna finds Constantine. Raven finds a new group of women to mother her. Mera finds Arthur. And they all find more self respect. It’s just so positive!!! I can’t gush about it enough!!

There is just so much to love in this series. It continues to be super feminist, it continues to strive for diversity, and it continues to have some awesome action sequences that are just as good as any other superhero comic out there. I am once again sitting on the edge of my seat waiting for the next one in the series (out this fall I think!). While I’m worried that some characters are done, I am excited to see who else could show up.

Rating 10: Once again “DC Bombshells” knocks me off my seat and excites and thrills me until I turn the final page. These ladies continue to kick serious ass!!!

“DC Bombshells (Vol.3): Uprising” isn’t on any Goodreads lists as of yet, but given the lists it’s predecessors are on it would fit right in on “#fempowerathon”, and “Amazons, Female Warriors, and Wonder Women”.