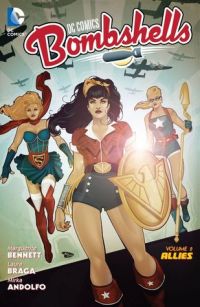 Book Description: The shadow of WWII looms ever larger as the Bombshells battle the Axis Powers across the globe.

In Gotham City, a quartet of copycat Batgirls are doing their part to protect the home front.

In Greece, Wonder Woman faces a battalion of the undead, led by the villainous Baroness Paula von Gunther.

In London, Stargirl and Supergirl learn a shocking-and dangerous-family secret, while Mera encounters a monstrous threat from the sea that not even she can control.

And in Berlin, Zatanna attempts to thwart the evil magic that’s been released into the world, while the Catwoman and Huntress rescue a captured Batwoman from the clutches of the Third Reich.

But the paths of these superheroines will converge as they face their greatest challenge yet. To defeat the undead tenebrae soldiers overtaking London, they’ll have to form a Justice League of their own!

Inspired by the popular DC Collectibles line, DC COMICS: BOMBSHELLS VOL. 2: ALLIES throws the world’s finest heroines into one of the greatest battles in history!

Review: When I originally looked into the second collection of “Bombshells” comics, it was said that it wouldn’t be published until September of this year. Which left me to have to muster up a lot of patience for it, as I loved the first collection of the series (I will link to my review of it at the end). But I put myself on the list at the library, and told myself that I was willing to wait for it. So imagine my unbound joy when, in AUGUST, I got a notification that it was ‘in transit’ to my library. August is NOT September and I don’t think I’ve ever been so happy of this fact as I was at that moment.

Now I had a feeling going in that perhaps it wasn’t going to live up to the first collection. And how could it, really? The first one laid out all of the characters, set up their stories, and gave them all a lot to do, yet not so much that they were overshadowing each other. Unfortunately this time around, we got less characters, and of those characters the focus was uneven. I am VERY sad to say that there was no Harley or Ivy whatsoever!!! Given that their shenanigans in France was one of my personal highlights from the first collection, I was pretty darn disappointed. And other characters like Batwoman and Zatanna really had few things to do this time around. A lot of the attention was on Supergirl, Stargirl, Wonder Woman, and the rise of the Tenebrae Undead Army that the Axis has unleashed.

Nazi zombies are always a fun villain to hate, and seeing them controlled by the rotten Baroness Paula von Gunther (aka one of Wonder Woman’s recurring enemies) was a DELIGHTFUL treat. I imagine that it would have been tempting to have one of DC’s more popular, MALE villains to be in charge of them, but instead Bennett went with von Gunther and I was pretty pleased by that. There are some great moments for Diana and Steve Trevor too, as poor Steve is very clearly suffering from PTSD (and a fairly sensitive and accurate depiction of it to boot) and she is his protector. But the most important character arc was that of Stargirl (whose name is Kortni in this timeline, the Russian equivalent to Courtney), a superheroine I was not terribly familiar with before these comics, but who became one of my favorites in this series. Stargirl is dealing with the insecurity of her power being relegated to her staff, and not within herself, unlike her adopted sister, Supergirl. In an effort to find out more about herself, Kortni goes to find her biological father, which in turn makes Kara feel like she too is out of place. She doesn’t know what her background is. It’s a lovely way of showing both girls feeling the same isolation in spite of each having what the other longs for. There was also a lot of really nice homages to their Russian origins, with their flashbacks being drawn in a similar style to a lot of Russian Artwork, the kind that my Mom is obsessed with and insists on having coffee table book after coffee table book on. And you can see Swamp Thing in one of these drawings. DELIGHTFUL.

We also got to see a fun new side group back in Gotham, with the rise of the Batgirls! They are a group of (pretty diverse!) teen girls who have decided to take on Batwoman’s ‘cowl’ and take out corruption back on the home front. While it sort of felt like a weird thing to shoehorn in when there were lots of other characters to see, I did enjoy that it gave us glimpses of something a bit more light hearted. Also, Tim Drake showed up in this storyline. I’m okay with this male DC character showing up, as he’s still pretty relegated to sidekick status. Love the dudes, but this is a comic to showcase the ladies!

And then, tragedy. I won’t spoil the tragedy here, but it marked the end of one large story arc, and along with that end came the loss of a character. Given my love for all of these girls, I knew that I was going to be a mess regardless of who kicked the bucket first, but by the time I got to that plot point I was pretty much a weeping mess on the couch, in awe of how bittersweet, touching, and sorrowful it was. These stories are so well written, you guys. I love all of the Bombshells and everything hurts now. I didn’t want to say goodbye. AND WHY DID THE SEND OFF HAVE TO BE SO BEAUTIFUL AND DEVASTATING?????

So while “DC Bombshells (Vol.2): Allies” wasn’t as strong as “Enlisted!”, it was still pretty damn good and filled with a lot of feelings and emotions and great plot lines. It’s probably gonna be a long wait until the next trade comes out, but I have a feeling that it will be worth it. The Bombshells are hands down my favorite comic characters out there today. And it’s filled with more Girl Power than a Spice Girls Video

Rating 9: Not as strong as it’s predecessor, and it’s too bad that some characters were absent, but “DC Bombshells: Allies” was a very good follow up. Lots of great storylines wrapping up, and lots of emotions and tears on my part.

“DC Bombshells (Vol 2): Allies” is not on any Goodreads lists yet. BUT, if you like the “Ms. Marvel” comics this could be for you. Also, for more fun female superhero stuff, check out “The Supergirls” by Mike Madrid. It’s a great history on female superheroes.