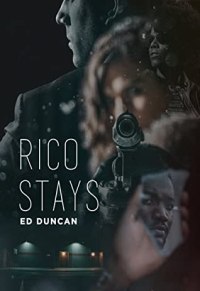 Where Did I Get This Book: I received a print copy from Book Publicity Services.

When the smoke cleared, the nephew had vanished, but three goons who had tried to help him lay dying where they’d stood. Fighting for his life, Rico was alive but gravely wounded.

Out of the hospital but not fully recovered, he needed a place to crash – a place where he wouldn’t be found by men who surely would be looking. A place like the cabin owned by lawyer Paul Elliott, whose life Rico had saved more than once. Trouble was, Paul’s girlfriend hadn’t forgotten Rico’s dark history. Or Paul’s fascination with him.

Using Rico’s girlfriend as bait, vengeful killers soon would be coming for him. The only question was whether he would face them alone or with help from Paul.

Review: Thank you to Book Publicity Services for sending me a print copy of this novel!

When I got the summary for “Rico Stays” by Ed Duncan in our email box, the premise was intriguing enough to catch my interest. I had recently finished my first watch through of “The Sopranos”, so taking on a thriller centering around a hit man trying to lay low while also trying to keep his girlfriend safe sounded like it could have promise. Once I picked it up and began reading, I started to get the feeling that something was off. The characters seemed like they were established already, in that we got some little blips about them, but it was a lot of telling in small summaries instead of slow unveiling of characterizations. I went back online to do some digging, and I realized something that I missed the first time: this was the third book in a series, not a standalone. A series I had not read.

I definitely take some responsibility for this, as within the email there was a link to more information that does mention “Rico Stays” is part of a series within the broader information summary. I didn’t realize that. But I made a commitment to review this book, so review it I shall. But know that this review is going to be a little…. different.

So what I did like about this book is that there is no denying that it is action packed. The conflict and action sequences basically start up right away, and it’s written in such a way that it feels like you could see it on a TV screen. Did I imagine some of these characters as “Sopranos” characters? Why yes I did. I also really liked Rico’s girlfriend Jean, whose kind and supportive character is also no nonsense and a problem solver. I greatly enjoyed how she advocated for Rico after he was in danger, and was able to connect with Paul, a lawyer who has a connection to Rico from past books. Also, Paul! I liked Paul too, as he clearly has a clear set of morals that he wants to abide by, and that sometimes comes in conflict with the various morals and ethics of his profession as a lawyer… namely, providing shelter for a hitman whom he owes a life debt to. That’s an interesting conundrum for this character, and it definitely puts not only his conscience, but his relationship, on the line.

But as a whole, I spent a fair amount of “Rico Stays” a bit… lost, shall we say? There were clear background plot points feeding into this story, be they as to why Rico is being targeted in the first place or why he and Paul have a tense but amicable relationship, or even as to how Rico and Jean’s relationship has progressed and changed. Without knowing these things, I had a harder time connecting to the story as a whole, and didn’t really find myself terribly invested in Rico’s predicament even as the stakes continued to mount. But I can’t be sure as to whether or not that is the fault of the story, or the fault of my ignorance.

So I think I’m going to have to do something I haven’t done before, and not really GIVE a full on rating on this book. It’s not a DNF because I finished it, but it also feels like I missed a good deal of context because this was the third in a series. So I am creating a new rating:  N/A. I can’t give this book a fair rating because it would be like jumping into the third installment of a movie trilogy that has a linear story, and trying to get the whole story from that alone. “Rico Stays” has solid moments on its own, but without the full context, I don’t really know what to think of it as a whole.

Rating N/A: I don’t know enough about the characters and the overarching plot line to really say if this book stuck the landing for the trilogy, but I did find some things about “Rico Stays” that were enjoyable. If you like Mafia or hitman stories, maybe go back to the beginning with “Pigeon-Blood Red” and start there.

“Rico Stays” isn’t on any Goodreads lists, but I’m sure if would fit in on “The Mafia Connection Group’s Favorite Mafia Themed Reads”!

Find “Rico Stays” and the rest of the “Pigeon-Blood Red” Trilogy at Ed Duncan’s website! Or on Amazon!