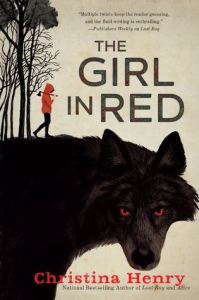 Book: “The Girl in Red” by Christina Henry

Book Description: It’s not safe for anyone alone in the woods. There are predators that come out at night: critters and coyotes, snakes and wolves. But the woman in the red jacket has no choice. Not since the Crisis came, decimated the population, and sent those who survived fleeing into quarantine camps that serve as breeding grounds for death, destruction, and disease. She is just a woman trying not to get killed in a world that doesn’t look anything like the one she grew up in, the one that was perfectly sane and normal and boring until three months ago.

There are worse threats in the woods than the things that stalk their prey at night. Sometimes, there are men. Men with dark desires, weak wills, and evil intents. Men in uniform with classified information, deadly secrets, and unforgiving orders. And sometimes, just sometimes, there’s something worse than all of the horrible people and vicious beasts combined.

Red doesn’t like to think of herself as a killer, but she isn’t about to let herself get eaten up just because she is a woman alone in the woods….

Review: This is another book that I put on my list sometime last year and forgot about. I rediscovered it on my audiobook list and placed a hold on it recently. All of that without really looking at the book description again. I had the idea that it was some sort of fairtyale retelling (I know, where could I have gotten that idea from??). Well, turns out it’s not so much that as a survival story after a massive global pandemic wipes out most of the population. Womp womp. Perfect timing there Serena! But I still really enjoyed this read, even if it hit a bit too close to home at times.

We first meet Red as she’s making her way through the woods, on her way to Grandma’s house. But life has not always been this lonesome, often terrorizing and violence filled trek. Through a series of flashback, we see Red’s world slowly come apart at the scenes as a global, deadly pandemic begins wiping out the population. And of her family, only Red fully realizes the extent of change ahead of them and the seemingly drastic steps they should be taking to prepare. Told in alternating chapters between past and present, we travel alongside Red as she navigates the dangers of this new reality and learns there is more to this pandemic than even she had prepared for.

So, like I said, I thought this was a fairly straightforward fairytale retelling when I requested it. I’m sure when I put it down on my TBR pile, I was aware of the actual subject matter as it’s right there in the book description. But I’d forgotten it over time. And, as with most audiobooks I read from the library, without an actual physical book to look at, I went into this one mostly blind only to realize what I was reading later. It was definitely an interesting reading experience, I have to say. There are plenty of books throughout my life that I can point to as having had different effects depending on the real-life events going on in my own life at the time I was reading them. And this was definitely one of those cases.

On one hand, Red’s extreme attention to detail and planning was intimidating for those of us just managing to get by in these times. Obviously, her pandemic, one that killed off 80% or so of the those it infected, was very different than our situation. But the human behavior that resulted was largely the same. There were those who stuck their head in the sand. Those who came up with wild theories. Those who were skeptical of the “help” being offered by the government. And those who took matters into their own hands. It was all incredibly believable and, of course, off-putting for that same “realness.”

I also really liked how we delved into Red’s own mindset in the midst of it. Unlike many other post-apocolypic/survival stories, this one doesn’t shy away from the way pop culture and media would shape the views of those going through it. Again and again, we see Red compare her own situation to that of a character in a movie and base her decisions around what those same characters did. We also see how there are both pros and cons to this inevitable comparison. On one hand, she has a healthy dose of skepticism about dark corners or splitting up as a group. But on the other hand, we see her have to grapple with the very real problem that there is never always a right choice. And not only will every choice come with its own risks, but the time spent over-analyzing which might be best comes with its own distinct risks and dangers. I really enjoyed this deep-dive into the psychology that an individual living through something like this might experience.

And, while there were definitely sad parts to the story, I appreciated that this book never wallowed in the direness of the situation. This is no “The Road,” by any means. It’s still an action/adventure book at its heart, and while tragedy is an inevitable part of it, Red herself is a hopeful character and one who keeps the story buoyed up and free from becoming overwhelmingly grim.

My only real criticism of this book comes with the ending. It kind of came out of nowhere. I looked down at my audiobook at one point and realized there were only 30 minutes left in the story and seriously thought maybe I’d made a mistake when downloading it. There was no way it could wrap up from where it was at that point to a satisfying ending! And while the ending was technically satisfying, it did feel like the author just kind of left off after the last big action scene and skipped to a final few pages of an ending. It almost read like a writing school project in that way. Like the author ran out of steam completely and just jotted something down so that they could check off the box for “has an ending” in the assignment criteria.

But, even with that, I still very much enjoyed this book. The audiobook was also very well down and the narrator did an excellent job of bringing Red’s voice to life. If you have the mental/emotional capacity for a book on this subject matter right now, I really recommend this one. Like I said, it could be tough at times, but as far as survival/pandemic stories go, it was surprisingly approachable and manageable, even during Covid times.

Rating 8: A surprising read full of twists and turns, but told from a primarily hopeful place and one that manages to pull the book up past what could have been an overly grim subject matter.

“The Girl in Red” is on these Goodreads lists: “Books that are so exciting your heart palpitates like mad!” and “Smart Apocalyptic and Dystopian Fiction.”

Find “The Girl in Red” at your library using WorldCat!

2 thoughts on “Serena’s Review: “The Girl in Red””