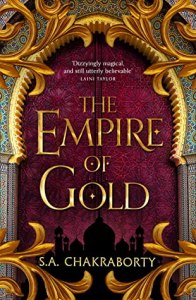 Book: “The Empire of Gold” by S.A. Chakraborty

After a brutal conquest stripped the city of its magic, Nahid leader Banu Manizheh and her resurrected commander, Dara, must try to repair their fraying alliance and stabilize a fractious, warring people.

But the bloodletting and loss of his beloved Nahri have unleashed the worst demons of Dara’s dark past. To vanquish them, he must face some ugly truths about his history and put himself at the mercy of those he once considered enemies.

Having narrowly escaped their murderous families and Daevabad’s deadly politics, Nahri and Ali, now safe in Cairo, face difficult choices of their own. While Nahri finds peace in the old rhythms and familiar comforts of her human home, she is haunted by the knowledge that the loved ones she left behind and the people who considered her a savior are at the mercy of a new tyrant. Ali, too, cannot help but look back, and is determined to return to rescue his city and the family that remains. Seeking support in his mother’s homeland, he discovers that his connection to the marid goes far deeper than expected and threatens not only his relationship with Nahri, but his very faith.

As peace grows more elusive and old players return, Nahri, Ali, and Dara come to understand that in order to remake the world, they may need to fight those they once loved . . . and take a stand for those they once hurt.

Previously Reviewed: “City of Brass” and “Kingdom of Copper”

Review: Oh man, I’ve been looking forward to this book for so long! It’s pretty funny to think that I discovered the first book in this excellent trilogy when Kate and I were accidentally trespassing early in the main room of the convention hall at ALA several years ago. I nabbed a copy before we figured out that we weren’t supposed to be there. (By the by, we had planned to go to ALA again finally this year as a reward for surviving our first year as mothers…damn you, Covid!!) Anyways, there was an even longer wait between this book and the last, a year and a half compared to the usual year, so I was really excited when I nabbed an early review copy. And, best of all, this is the perfect ending to such a great series!

The wheel of violent retribution has turned, and like so many other revolutions and wars of the past, Daevabad must suffer through it. But while tragedy and violence are nothing new to a city that throughout history has been fought over, this time is different, as much more has been lost then ever before. And Dara, Nahri, and Ali are the keys to moving forward. But to do so, they each must grapple with the truths of their past: the unknown, the forgotten, and all of the things buried deep in themselves. What they each discover will not only reshape who they are but will reshape the future of Daevabad itself.

The last book in this trilogy left off on a massive cliffhanger. Daevabad had just been horrifically invaded by Dara and Nahri’s mother who used a dastardly plan that involved mass genocide of Ali’s father and people. Nahri and Ali fled the city and somehow ended up back in Nahri’s homeland of Cairo, Egypt, the powerful ring of Suileman in their possession. The stakes were nothing if not high. And given the incredibly long history of tensions between the various daeva tribes, the shafit (their part-human progeny), and the various other magical players on the board, it was almost impossible to imagine how all of the various threads would be tied up in this final book.

And obviously I won’t spoil it for you! There are so many surprises and twists and turns to this book that completely blew me away. I had a few ideas about what could come to pass. But let me just say, I’m so pleased I wasn’t the author, as not only did none of my ideas happen, but they were all massively underwhelming compared to what we were given! This book not only tackles the tangled web of politics and horrible tribal tensions within Daevabad itself, but it expands the world out so much further than we’ve seen in previous books. We spend more time in Nahri’s Cairo. We travel down the Nile and meet crocodile kings. We get captured by pirates and end up in a wondrous jungle empire. And that’s all probably in the first half of the book, before things really go crazy!

In my past reviews for this series, I’ve talked a lot about the dark history that is laid out before us in this trilogy. And all of that is here as well, with a few extra knife twists to just make it all the more grim. But what stood out to me in this book was just how incredibly funny Chakraborty’s writing is as well. As I was reading, I found myself agian and again highlighting passages on my Kindle that made me laugh out loud. I’m sure this was present in the first two books as well. Indeed, it kind of must have to balance out said darkness. But for some reason, the casual and effortless humor really stood out here. Especially with regards to Nahri and Ali’s characterization, and their tenuous relationship.

Nahri concludes this series as probably one of my all-time favorite fantasy heroines. She never loses sight of who she is throughout this entire series, and she’s just the sort of level-headed, pragmatic, no-nonsense character that I prefer. And, like I said, she’s hilarious. But Ali is really the character to go through the biggest arc in this book. In the first book, I remember being slightly put-off when I discovered I had to give up page time with Nahri to hear about this rather ridiculously idealistic princeling. But over the course of the trilogy, Ali has really come into his own, and it’s in this last book where I really fell in love with him and his story. With the world crashing around him, Ali is forced to finally confront the balance between his ideals and the world that is before him. Not only this, but his is the story that holds the most mysteries and goes to the most unexpected places.  I really loved how both of these characters’ story turned out in the end.

Dara, on the other hand…oof. We all knew his story was tragic, and it’s more of the same here. His lows are just so much lower than anyone else’s that it’s hard to know how he gets through it. He’s half villain, half victim, but you can’t help but feel for him at every turn. Really, though, any villainous acts that he commits are so out-shown by the main villain, Manizeh that it pales in comparison. The villains have always been strong in this book, but wow, she takes the cake.

The writing and world-building is just as strong here as it was in the first two books, so there’s not much new to report here other than the fact that excellence remains excellent. It’s a testament to the strength of the author though that she managed to pull out this conclusion. Like I said before, it was almost impossible to see how she would write herself out of the seemingly inescapable corner the story was in at the end of the last book. It looked like there was no possible ending that didn’t result in death and despair for at least one of our main characters. And while we did still have some of that, I will say that I was completely and utterly satisfied with the conclusion of this story. If you’ve been gobbling up these books like I have, you’re in for a treat with this last one!

Rating 10: A feat of masterful story craft, exploding out the world while also never losing sight of the intimate moments driving its main characters. Simply excellent.

“The Empire of Gold” is a newer title so it isn’t on many Goodreads lists, but it is on “Upcoming 2020 SFF with female leads or co-leads.”

Find “The Empire of Gold” at your library using WorldCat!

One thought on “Serena’s Review: “The Empire of Gold””