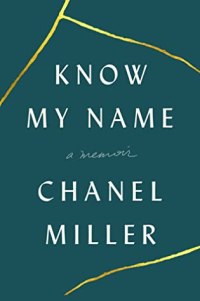 Book: “Know My Name: A Memoir” by Chanel Miller

Book Description: She was known to the world as Emily Doe when she stunned millions with a letter. Brock Turner had been sentenced to just six months in county jail after he was found sexually assaulting her on Stanford’s campus. Her victim impact statement was posted on BuzzFeed, where it instantly went viral–viewed by eleven million people within four days, it was translated globally and read on the floor of Congress; it inspired changes in California law and the recall of the judge in the case. Thousands wrote to say that she had given them the courage to share their own experiences of assault for the first time.

Now she reclaims her identity to tell her story of trauma, transcendence, and the power of words. It was the perfect case, in many ways–there were eyewitnesses, Turner ran away, physical evidence was immediately secured. But her struggles with isolation and shame during the aftermath and the trial reveal the oppression victims face in even the best-case scenarios. Her story illuminates a culture biased to protect perpetrators, indicts a criminal justice system designed to fail the most vulnerable, and, ultimately, shines with the courage required to move through suffering and live a full and beautiful life.

Know My Name will forever transform the way we think about sexual assault, challenging our beliefs about what is acceptable and speaking truth to the tumultuous reality of healing. It also introduces readers to an extraordinary writer, one whose words have already changed our world. Entwining pain, resilience, and humor, this memoir will stand as a modern classic.

Review: Honestly, when I started “Know My Name” by Chanel Miller, I realized that while I wanted to review it, I had a conundrum in front of me. How do you fully review such a deeply personal memoir about a very personal event in someone else’s life? For those who may be unfamiliar with the name Chanel Miller, perhaps you know the name Emily Doe, the woman that Brock Turner raped, and then was only sentenced to six months in jail (he eventually only served three, by the way). His sentence set off a firestorm across the world, and was one of the many focuses on the disparities in our justice system when it comes to class, race, gender, and sexual assault. I really wanted to read and review this book because Miller’s story is so important. But again… how does one review a story such as this?

Chanel Miller has such a powerful and all consuming writing style, and her story focuses on the night she was raped and what followed afterwards, from having to process her trauma, having to go to court, and having to be dragged and scrutinized in the public spotlight, even if she was technically anonymous. She is unflinching and candid about what happened the night that Turner assaulted her and how it was in the days afterwards, and while those moments are especially hard to read in this book Miller does such a great job of really laying everything on the table. She isn’t afraid to put herself completely out there, and her honesty about what her experience was like really hits the reader in the heart. Her writing style is beautiful, and really gets her sadness, anger, incredulity, and fortitude across. You saw glimpses of this in her victim impact statement that went viral shortly after it was made public, but now seeing it with the complete context of her life and experience just shows how very talented she is as a writer.

She also really emphasizes what it is like to be a victim of a high profile sexual assault case, and how trying and awful it can be. From having to see her actions before the assault dissected and laid out in the open, to having people imply that she asked for it because of said actions, to seeing how Brock Turner’s potential was held in higher regard than her experience of being victimized by him, Miller shows how hard it is for victims to come forward. The entitlement of Turner and the way that the judge sentenced him based on his potential as a wealthy white man is infuriating, and Miller gets to address these issues with her own words. And in the process she shows the world the story that a lot of people may not think about when a man with ‘high potential’ or high profile is outed as a predator: the story of a victim who will have to live with a traumatic event for the rest of their life, and how the fallout is going to effect them. Miller emphasizes how society favors protecting men like Turner at the expense of victims like her, and while we may know that, it doesn’t hurt any less to have it reaffirmed.

I highly recommend “Know My Name”. It is going to be a hard read, and it’s going to probably hurt, but it’s an important story, and Chanel Miller deserves to have her truth amplified.

“Know My Name: A Memoir” is included on the Goodreads lists “Breaking The Silence: Talking About Violence Against Women”, and “ATY 2020 – Books Related to News Stories”.

Find “Know My Name: A Memoir” at your library using WorldCat, or a local independent bookstore using IndieBound!