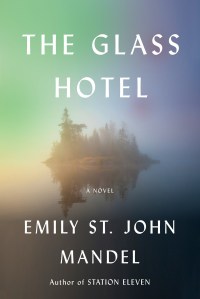 Book Description: From the award-winning author of Station Eleven, a captivating novel of money, beauty, white-collar crime, ghosts, and moral compromise in which a woman disappears from a container ship off the coast of Mauritania and a massive Ponzi scheme implodes in New York, dragging countless fortunes with it.

Vincent is a bartender at the Hotel Caiette, a five-star glass and cedar palace on an island in British Columbia. Jonathan Alkaitis works in finance and owns the hotel. When he passes Vincent his card with a tip, it’s the beginning of their life together. That same day, Vincent’s half-brother, Paul, scrawls a note on the windowed wall of the hotel: “Why don’t you swallow broken glass.” Leon Prevant, a shipping executive for a company called Neptune-Avramidis, sees the note from the hotel bar and is shaken to his core. Thirteen years later Vincent mysteriously disappears from the deck of a Neptune-Avramidis ship. Weaving together the lives of these characters, The Glass Hotel moves between the ship, the skyscrapers of Manhattan, and the wilderness of northern Vancouver Island, painting a breathtaking picture of greed and guilt, fantasy and delusion, art and the ghosts of our pasts.

Review: Though I cannot possibly imagine going back and reading it right now, I really loved Emily St. John Mandel’s post-apocalyptic book “Station Eleven”. While it’s true that it takes place in a world that has been ravaged by a super flu (no thanks right now), it is also a lovely and quiet meditation on the power of art, the ties and connections that keep us together, and humanity as a whole. When I saw that she had a new book coming out called “The Glass Hotel”, I put it on my library hold list. And when the libraries closed, it was the first book that I decided to buy to own. Honestly, Mandel should be one of my must buy authors anyway, and she once again has delivered a quiet and introspective tale, this time about Ponzi schemes, of all things. Of course, it’s about as much about Ponzi schemes as “Station Eleven” was about a pandemic. It’s merely a backdrop to something much more intimate.

We follow a few different paths in this book, and a few different timelines, realities, and narratives. They do all connect together in ways that seem more tenuous than they are, but then that’s one of Mandel’s greater talents. The three main characters, I would argue, are the half siblings Paul and Vincent, and John Alkaitis, Vincent’s eventual husband and Ponzi scheme perpetrator. All are running away from something, be it guilt, or the truth, or grief, though it could be argued that all of them are running from all three in different ways and manifestations. Though the biggest thing they’re all running from is responsibility, and all start seeing various ghosts as they do so. It’s unclear as to whether they are real or not, but ultimately it doesn’t really matter. In the end, they are seen because they are the unshakeable reminders of those that these characters have hurt or wronged, so even if they aren’t ‘real’, they still very much are.

None of these characters we meet are exactly ‘good’ people, but because of their depth and their perspectives you become invested in them and their outcomes regardless of their likability. Vincent’s story, being the largest connector of all narratives, is in many ways the most engrossing and haunting, as her complicated relationship with her brother, her ill fated marriage to a criminal, and her longing for her mother (who died when Vincent was a tween, her death mysterious, and mirroring Vincent’s own disappearance later in life) drive her constant moves, shifts, and changes in lifestyle and in some ways personality. Alkaitis, too, runs from his responsibility in the wreckage of so many lives, though his running is mostly done by letting himself disappear into a ‘counterlife’ in which he was never caught, a life that bleeds in and out of his narrative, and then some. Paul’s story is perhaps the smallest of the threads, but in many ways it has some of the largest impacts on the paths that all the characters take. As his overall purpose and his role in the story slowly fell into place, I found myself astounded by the intricacies and how carefully Mandel made sure to bring it all together. And truly, it’s a wonder to behold as it all does flow and merge. By the time I had finished this novel, having read it mostly in one night and definitely staying up far too late to finish it, I just let out a long sigh, knowing that by reading it I had really experienced something remarkable. Like “Station Eleven”, “The Glass Hotel” has a lot of pain and trauma, but it almost feels muted and quiet, as those are not the points of the story. The point is resilience, no matter the cost. It’s wonderful and tragic all at once.

(and yes, this story does have connections to “Station Eleven”. But it stands so well on it’s own it’s more like Easter Eggs than an actual canonical link.)

Gosh I loved this book. It’s haunting and I know that it’s going to stick with me for a long while.

“The Glass Hotel” is included on the Goodreads lists “Covid-19: Books to Read on Lockdown”, and “Books Unbound Podcast”.

Find “The Glass Hotel” at your library using WorldCat, or a local independent bookstore using IndieBound!