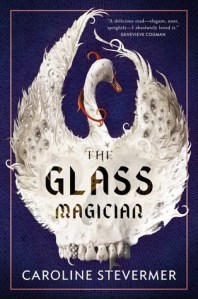 Book Description: What if you could turn into the animal of your heart anytime you want?

With such power, you’d enter the cream of New York society, guaranteed a rich life among the Vanderbilts and Astors, movers and shakers who all have the magical talent and own the nation on the cusp of a new century.
You could. If you were a Trader.

Thalia is a Solitaire, one of the masses who don’t have the animalistic magic. But that is not to say that she doesn’t have talent of another kind—she is a rising stage magician who uses her very human skills to dazzle audiences with amazing feats of prestidigitation. Until one night when a trick goes horribly awry…and Thalia makes a discovery that changes her entire world. And sets her on a path that could bring her riches.

Review: I was intrigued by the original sounding premise of this book. Set in New York, turn-of-the-century time period, and some type of new class system that is based around one’s magical ability to turn into an animal. All sounds like cool concepts and all put together, I really had no idea what to expect from this book. Unfortunately, it didn’t really turn out to be much of anything at all, so no expectations was about right.

After inheriting her father’s magic business, Thalia has been making her living as a stage magician. Not blessed with actual magical abilities that would vault her into the upper class of New York society, she is still managing to make a name for herself by performing wondrous and dangerous tricks in her act. One night, however, a trick goes wrong and Thalia discovers there is more within her than she had ever known. Now with abilities she doesn’t know how to control and a murder added to the mix, Thalia’s life is beginning to change. Will it be for the better or for the worse?

For the pros for this book, I will say that I still liked the uniqueness of the time period during which it was set and the choice to have it take place in New York City. It’s always a breath of fresh air to find a fantasy novel that isn’t set in some generic “medieval times” setting. And even more so to find one that is set in a city that exists today. However, I do think the author left a lot on the table with regards to what all could have been done with these two elements. The other positive worth noting was the writing itself. It didn’t stand out to me in any particular way, but it was of the sort that is strong enough to get the job done without distracting the reader. And, considering that I didn’t love much about this book, I think it’s a real strength of the writing that it was strong enough that I didn’t ever really feel like just putting the book down for good.

Unfortunately, as I mentioned with the time period and the setting, it felt like the author came up with some cool, individual ideas, but didn’t spend any time really building up the world or system around them. Like, people have this magic to turn into animals and society has been built in such a way that possessing this ability puts you into an elite class. But the why or how of this is never really explained. The history of how this system came to be in place is lacking. And there is really not magic system of any kind to explain the rules, limitations, or even, to some extent, the benefits of having these abilities. The entire world that has been created depends on these magical factors, and yet we get next to nothing about what they really are. It felt like the author simply didn’t want to bother with the details of these things, instead wanting to just jump into her heroine’s own story.

But there, too, I had problems. Thalia is an interesting enough character on her own, but the book simply didn’t have enough story for her. The entire book feels made up of either Thalia struggling to learn to control her new abilities or making small bits of progress solving a murder mystery. I was pretty surprised, actually, when the murder mystery aspect of it became apparent since there wasn’t any hint of that in the general description. But I’m all for historical murder mysteries, so this should have been a benefit to the story. Instead, again, it felt like only the most basic aspects of this part of the story were really explored. Things all come way too easily to Thalia, with people often behaving against their own best interest or out of character to help her on her way.

To make up page time for the lack of world-building, magic system, or complications in the murder mystery, we instead spend an incredible amount of time just in Thalia’s mind exploring her feelings. I don’t have a problem with books that center largely around the introspective thoughts of a main character, but there just has to be more to the story itself to support this. I also didn’t love the romance we were given. It felt forced and lacked chemistry.

I also have to spend a moment on that cover. Yikes. It’s the kind of thing that immediately attracts the eye (indeed, I clicked on it in NetGalley just because of the swan motif), but the more you look at it, the worse it gets. It’s all kinds of creepy with the teeth and eyes, and I’m not sure it really represents well the book we have. Instead, if I had noticed these details when choosing the book off the shelf, I think I would have most likely put it back just due to how unnerving I find it all.

Overall, I wasn’t impressed with this book. It felt like the author had some really neat ideas at the very core of it, but didn’t spend enough time to fully develop anything. The writing was strong enough, but there wasn’t enough story to go around.

Rating 6: Lack luster and thin, this book didn’t hold up to the promises of its premise.

“The Glass Magician” is a newer title and isn’t on any relevant lists. Bizarrely (and inaccurately) it is on “Historical Fiction 2020.”

Find “The Glass Magician” at your library using WorldCat!