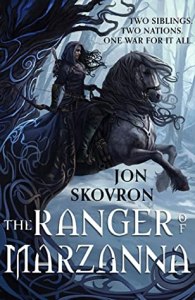 Book: “The Ranger of Marzanna” by Jon Skovron

Book Description: When their father is murdered by imperial soldiers, two siblings set out on opposite paths—one will destroy the Empire forever and the other will save it—in this thrilling new Russian inspired epic fantasy from Jon Skovron.

Sonya is training to be a Ranger of Marzanna, an ancient sect of warriors who have protected the land for generations. But the old ways are dying, and the rangers have all been forced into hiding or killed off by the invading Empire.

When her father is murdered by imperial soldiers, she decides to finally take action. Using her skills as a ranger she will travel across the bitter cold tundra and gain the allegiance of the only other force strong enough to take down the invaders.

But nothing about her quest will be easy. Because not everyone is on her side. Her brother, Sebastian, is the most powerful sorcerer the world has ever seen. And he’s fighting for the empire.

Review: Between the beautiful cover art and the intriguing book description, this was a no brainer for me to request. I always love stories about warrior women, and the fact that it was based on Russian folklore is just the cream on top. I was definitely getting some “The Bear and the Nightingale” vibes off this, which couldn’t have been more of an inducement since I’m still in mourning that that trilogy ended…like more than a year ago now. Get over it! Sadly, however, this book wasn’t quite that. There were some strengths to it, but not quite what I was looking for, in the end.

Sonya is in training to be a Ranger, a member of an elite fighting force. In pursuit of this goal, she travels around the countryside attempting to help her people against the doings of the invading imperial soldiers. While away, however, her family is attacked and her father killed. Her brother, however, a powerful sorcerer-in-training, survives and begins to make a new life for himself, one that sides with the very people who murdered their father. Now these two siblings find themselves on very different paths, paths that will eventually intersect to devastating effect.

So, to start with a few things I liked. I did like the Russian/Ukranian influences on the culture, location, and folklore of the story. The elemental magic system was also interesting enough. It’s not a super new concept, but I felt like the author put enough new twists into how it all works to keep it from feeling flat. I particularly liked the cult-like religion that followed Marzanna and the sacrifices that were required of those who committed themselves to her path (as we see through Sonya’s story.) But, sadly, I had a really hard time connecting to either of the two main characters, and I felt like the pacing and writing of the story weren’t helping matters out.

First, Sonya. I did end up liking her half of the story better than her brother’s, but again this was mostly due to the intriguing concept of having to give up parts of oneself to become a full follower of Marzanna. However, even in this part of the story, I didn’t feel like the author truly explored this concept completely. In many ways, it mostly just made Sonya less likable. She starts out incredibly bad-ass and so some of her struggles then appear out of character. But at the same time, growth for the character comes out of these moments, but never felt like it was really being applied completely. It’s hard to get at exactly what my problem was. I think maybe it was just that the actual character herself felt too flimsy to hold up the more grand adventure she was supposed to be having. And by the time we got to some of the darker portions of her tale, the part where readers have to begin questioning her actions and motives, it’s too late to really feel invested enough in it all.

As for Sebastian, I didn’t like him from the start, and it didn’t get any better as we went along. In the very first chapter we meet him, his father his killed and he and his mother are shipped back to the capitol city. His entire inner thought process of these events was summed up with an actual line saying that he didn’t really get along with his father that much so that must be why he’s not really grieving. From there, it just got worse as he literally teams up with the very people who killed his father and pretty much goes “meh” about the idea that his powers are now going to be used against his own people. There simply wasn’t enough (or any!) real conflict shown between Sebastian and his father to justify to bewildering turn for his character. Sebastian is either a sociopath who can’t care about others or an outright villain. Neither are likable. It’s especially confusing as he’s presented in a way that makes it clear that the author expects you to sympathize with him and read him as an equal protagonist. I just didn’t get it, and what I did get, I didn’t like.

I also felt like the writing and pacing of story were just a bit off. The characters spoke in a very YA manner, but this didn’t mesh well with the super violent descriptions that came with the action scenes. What’s more, the author had an unfortunate habit of info-dumping in his dialogue making it read as unnatural and stiff. Overall, I was pretty disappointed by this book. I know that the author has a fairly popular series already published, so I’m not sure if this was an aberration or whether this story just didn’t mesh with me specifically. If you are a fan of his other work and want to give this one a shot, don’t forget to enter the giveaway for an ARC copy of this book!

Rating 6: The two unlikable protagonists were too much for me to get past.

“The Ranger of Marzanna” is a newer title, so it isn’t on any Goodreads lists. But it should be on “Warrior Women.”

Find “The Ragner of Marzanna” at your library using WorldCat!