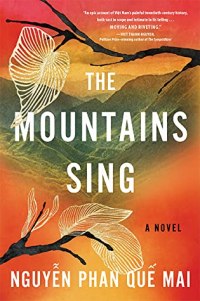 Book Description: With the epic sweep of Min Jin Lee’s Pachinko or Yaa Gyasi’s Homegoing and the lyrical beauty of Vaddey Ratner’s In the Shadow of the Banyan, The Mountains Sing tells an enveloping, multigenerational tale of the Tran family, set against the backdrop of the Viet Nam War. Tran Dieu Lan, who was born in 1920, was forced to flee her family farm with her six children during the Land Reform as the Communist government rose in the North. Years later in Hà Noi, her young granddaughter, Hương, comes of age as her parents and uncles head off down the Ho Chí Minh Trail to fight in a conflict that will tear not just her beloved country but her family apart.

Vivid, gripping, and steeped in the language and traditions of Viet Nam, The Mountains Sing brings to life the human costs of this conflict from the point of view of the Vietnamese people themselves, while showing us the true power of kindness and hope. This is celebrated Vietnamese poet Nguyen Phan Que Mai’s first novel in English.

Review: I’ve decided that every once in awhile I’m going to branch out from my usual genres that I review on here and dive into something different. Don’t worry, reviews of all that’s scary, thrilling, or picture heavy will still be dominant when it comes to what I talk about on here! But when I come across a book like “The Mountains Sing” by Nguyễn Phan Quế Mai, I really want to share it with anyone who will listen! Because while I love me horror and thrillers, I also really love family sagas in my fiction. And “The Mountains Sing” is the best family saga I’ve encountered since “Homegoing” by Yaa Gyasi.

“The Mountains Sing” is a lyrical and bittersweet family saga that follows the Tran Family in North Vietnam. There are two main perspectives. The first is that of Hương, a young girl who is living with her grandmother during the last days of the Viet Nam War as her parents are fighting on the Ho Chi Min Trail. The second is the story of her grandmother, Dieu Lan, who had to escape her farm during the Land Reform Movement lest she and her children be murdered as landowners. These two stories follow significant moments in North Vietnamese/Vietnamese history, and the repercussions for the people who were living there during those times. Nguyễn Phan Quế Mai paints a beautiful picture of the setting, and draws complex and engrossing characterizations. Both Dieu Lan and Hương have to confront difficult decisions for themselves, and the difficult decisions of others. As someone who grew up in the United States, Vietnamese history isn’t something that was covered in the classes I took in high school. Hell, even though I went to a pretty progressive private school with better and more honest history texts than others, we still didn’t take a deep look into the Vietnamese side of the Viet Nam War. So reading this book from the perspective of a Vietnamese author whose characters had to live the consequences of the war as civilians on the Northern side, it was eye opening and very worthwhile. It should also be noted that the deep complexities living under the North Vietnamese Communist Party’s rule aren’t ignored or swept away. I had never heard of the Land Reform, and it is absolutely horrific. That said, the horrors of being attacked by the United States with imperialist motivations isn’t dismissed as nothing. If anything, this story shows how those seeking power will exploit those below them to do their dirty work, be it French colonists trying to take over and using locals to inflict rule, or farmers murdering landowners to take land for the movement, or soldiers from America being sent to fight a war for the upper classes and killing civilians on the ground.

I also greatly liked the characters and the various journeys that each one took, and the emphasis on family. Hương learns the truth about her family history, just as she learns the truth about the things that her family members have had to do to survive during times of great violence and tragedy, and you see her grow in empathy and character. But it was Dieu Lan’s story that really hit me in the heart, as she tries to keep her children safe as they escape their village and go on the road to Ha Noi. The horrible choices that she had to make, and the repercussions of those choices, were heartbreaking and left me in tears many times, and seeing her become more resilient and tough was a character journey that had the most effect on me. I enjoyed the contrast between these two women and their experiences, and how each of them had ripple effects upon the other. Their strengths manifest in different ways, but it’s a great way to show that strength comes in many forms.

“The Mountains Sing” is a heart rendering and hopeful story from a gifted voice. I eagerly await any other novels that Nguyễn Phan Quế Mai may write in the future.

Rating 9: A beautifully written family saga set in Viet Nam, “The Mountains Sing” gives the perspective of the Vietnamese people during times of conflict and shows how hope and family can get people through difficult times.

“The Mountains Sing” is included on the Goodreads lists “Family Saga Novels”, and “Books by Vietnamese/Vietnamese-Diaspora Writers”.

Find “The Mountains Sing” at your library using WorldCat, or at your local independent bookstore using IndieBound!