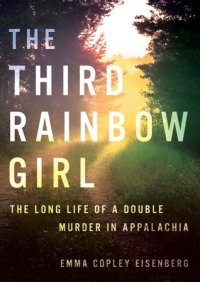 Book: “The Third Rainbow Girl: The Long Life of a Double Murder in Appalachia” by Emma Copley Eisenberg

Book Description: In the afternoon or early evening of June 25, 1980, two young women, Vicki Durian and Nancy Santomero, were killed in an isolated clearing in rural Pocahontas County West Virginia. They were hitchhiking to an outdoor peace festival known as the Rainbow Gathering, but never arrived. Their killings have been called “The Rainbow Murders.”

For thirteen years, no one was prosecuted, though suspicion was cast on a succession of local men. In 1993, the state of West Virginia convicted a local farmer named Jacob Beard and sentenced him to life imprisonment. Later, it emerged that a convicted serial killer and diagnosed schizophrenic named Joseph Paul Franklin had also confessed. With the passage of time, as the truth behind the Rainbow killings seemed to slip away, its toll on this Appalachian community became more concrete—the unsolved murders were a trauma, experienced on a community scale.

Emma Copley Eisenberg spent five years re-investigating these brutal acts, which once captured the national media’s imagination, only to fall into obscurity. A one-time New Yorker who came to live in Pocahontas Country, Eisenberg shows how that crime, a mysterious act of violence against a pair of middle-class outsiders, came to loom over several generations of struggling Appalachians, many of them
laborers who earned a living farming, hauling timber, cutting locust posts, or baling hay—and the investigators and lawyers for whom the case became a white whale.

Part “Serial”-like investigation, part Joan Didion-like meditation, the book follows the threads of this crime through the history of West Virginia, the Back-to-the-Land movement, and the complex reality contemporary Appalachia, forming a searing portrait of America and its divisions of gender and class, and its violence.

Review: I’ve mentioned this in the past about how my mother likes to send me book reviews from the New York Times or the Washington Post or what have you if she thinks that the book will be of interest to me. Such themes have included cults, murder, and a first scene which involved two men hooking up in a Bulgarian public restroom. Suffice to say, I’m always intrigued when a new review shows up in my inbox. So when she sent an article about “The Third Rainbow Girl” by Emma Copley Eisenberg, I knew that it was bound to be a spot on recommendation. And not only was it spot on, it was about a true crime cold case that I had never heard of until that moment! Mom comes through once again with the creepy and salacious reads!

“The Third Rainbow Girl” is a dual narrative. One is the examination and dissection of a cold case murder from 1980 in which two women were found murdered in Pocahontas County, West Virginia, and the woman who was their friend and narrowly missed being murdered herself. The other is a personal memoir by Eisenberg, who spent a few formative years working in Pocahontas county decades after the fact. These two narratives come together to paint a portrait of the community, the culture, and the various hardships and struggles the people have, as well as how the murders and the fallout affected those who live there. But they also tell the story of women trying to find their freedom in different ways, and how misogyny and violence can have a hefty price. The story of Nancy Santomero and Vicki Durian is a familiar one of women who meet a violent end, but the way that Eisenberg slowly peels back the layers of their story is haunting and depressing in how incomplete it feels, even if it’s kind of solved. From thrown out charges to an overturned conviction to the confession from notorious serial killer Joseph Paul Franklin (that ultimately was never pursued as charges because he was already on death row for two other murders), Santomero and Durian’s case has been a mystery, even if the case is technically closed. And the idea of the ‘hillbilly monster’ trope has been one that haunted it from the get go, as everyone in town was sure that it was someone local who was taking aggression out on the ‘hippie’ girls. And yet, if Franklin is to be believed, he was an outsider and certainly not the monster we’ve come to associate with pop culture depictions of Appalaichian predators, though far more dangerous than some “Deliverance” backwoods hick. For whatever reason, be it misogyny, or two victims who didn’t fit the ‘missing pretty white woman’ mold to a t (as while they were both white, neither Santomero nor Durian were seen as ‘pretty’ by media frenzy standards, and as hippie chicks had certain stigmas around them), or a community that had turned on itself, this murder is still incomplete, and still haunts Pocahontas County.

The other narrative, that of Eisenberg’s own experiences in Pocahontas County while working for VISTA, gives a little more context to the culture of the area, though it sometimes treads into ‘this could have been ME!’ territory. The title of the book refers to the Third Rainbow Girl, a woman named Elizabeth Johndrow who had been friends with Durian and Santomero but narrowly missed becoming a victim due to timing and sheer luck. You can see that Eisenberg relates to Johndrow, and on other levels Durian and Santomero, because of the need to explore the world and to find herself when she was young and living in the area, without knowing what would come of that need for adventuring. She experienced first hand the highest highs of living in Pocahontas County, and also saw the way that women are both taught to be tough while being cut down because of circumstance and the misogyny that is rampant in that culture, as it is in other American cultures, though Appalachia gets more scrutiny than some supposedly more progressive parts of the country. I thought that the memoir section of this book, along with the history lessons, definitely made me approach the subject matter with more compassion and a more open mind that I would have had it not been there. But that said, I did find some of the comparisons made between her life and the victims lives, even if not overtly, to feel a little self centered. Because of this, I wasn’t as connected to this part of the story, and wanted to get back to the case at hand as it unfolded and shifted.

Overall, “The Third Rainbow Girl” is a unique take on the true crime genre, and it examined themes that many true crime books don’t. I think that if you are looking for straight true crime it may not be the best fit, but if you want a little reflection and contextualization, you should definitely give it a whirl.

Rating 7: A cohesive and deep dive into a cold case that I was unfamiliar with, and while I liked the background provided to West Virginia, the memoir aspect felt a little shoehorned in.

“The Third Rainbow Girl” is included on the Goodreads list “True Crime by Women and POC”.

Find “The Third Rainbow Girl” at your library using WorldCat!