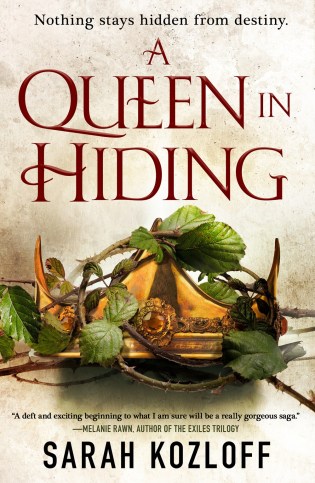 Book: “A Queen in Hiding” by Sarah Kozloff

Book Description: Orphaned, exiled and hunted, Cérulia, Princess of Weirandale, must master the magic that is her birthright, become a ruthless guerilla fighter, and transform into the queen she is destined to be.

But to do it she must win the favor of the spirits who play in mortal affairs, assemble an unlikely group of rebels, and wrest the throne from a corrupt aristocracy whose rot has spread throughout her kingdom.

Giveaway Details: I was lucky enough to receive two copies of this book, and while I’m enjoying finishing up reading mine, I thought I’d offer a giveaway for the other! I won’t go into my full thoughts on the novel itself, but the publisher is trying something new with the way they are publishing this series: bingeable books!

I’ve said in my reviews of Michael Sullivan’s books that part of my enjoyment is due to the reassurance that all the books in the series have already been completed. This has allowed them to be published one after another every six months. This is an aggressive publishing schedule for any author, but particularly for epic fantasies that tend to run long. Even Brandon Sanderson, one of the most prolific and fast-producing fantasy authors currently writing, has several years go by between books in his epic “Stormlight” series.

With Kozloff’s “The Nine Realms” series, Tor Books is upping the ante and releasing all four books within a  month of each other. That’s incredible, and I’m, at least, not aware of another publishing run similar to this. Even a fast reader would struggle to keep up with a release schedule like that. And judging by the first book that is almost 500 pages long, these aren’t short books! It will be pretty  interesting to see how readers respond to this strategy. If anything, like Sullivan’s works, it’s reassuring to know that the series will be completed in a timely manner. But what’s more, with books coming out at this rate, it should be easy enough to finish one book and simply pick up the next, making the entire series read as one, super long, book all in itself.

So, get started as soon as possible and enter to win a paperback copy of “A Queen in Hiding.” The giveaway is open to U.S. residents only and ends on January 29.

6 thoughts on “Giveaway: “A Queen in Hiding””