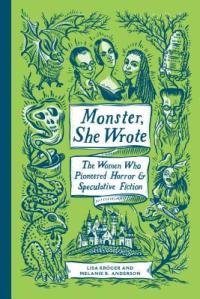 Book: “Monster, She Wrote: The Women Who Pioneered Horror and Speculative Fiction” by Lisa Kröger and Melanie R. Anderson

Book Description: Weird fiction wouldn’t exist without the women who created it. Meet the female authors who defied convention to craft some of literature’s strangest tales. And find out why their own stories are equally intriguing.

Everyone knows about Mary Shelley, creator of Frankenstein; but have you heard of Margaret Cavendish, who wrote a science-fiction epic 150 years earlier? Have you read the psychological hauntings of Violet Paget, who was openly involved in long-term romantic relationships with women in the Victorian era? Or the stories of Gertrude Barrows Bennett, whose writing influenced H.P. Lovecraft? Monster, She Wrote shares the stories of women past and present who invented horror, speculative, and weird fiction and made it great. You’ll meet celebrated icons (Ann Radcliffe, V.C. Andrews), forgotten wordsmiths (Eli Coltor, Ruby Jean Jensen), and today’s vanguard (Helen Oyeyemi). And each profile includes a curated reading list so you can seek out the spine-chilling tales that interest you the most.

Review: Even though horror is hands down my favorite literary genre (or genre of any kind of consumable media), that doesn’t exclude it from my general lack of experience with ‘the classics’. Sure, I’ve read books like “Frankenstein”, “Dracula”, and “The Turn of the Screw”, but in general I have kept my horror experiences fairly solidly in the 20th century and beyond. On top of that, a lot of what I’ve read has been fairly male dominated. So when I saw that “Monster, She Wrote: The Women Who Pioneered Horror and Speculative Fiction” was a book that was coming out, I decided that I needed to educate myself about horror classics, specifically those written by women, and to expand my ‘to-read’ list to fit the recommendations made within this book.

And boy are there many recommendations! “Monster, She Wrote” gives us a list of female authors of horror and speculative fiction, gives a comprehensive but succinct biography of each of them, and explains the importance and significance of a few of their works, or at the very least gives us the plot and lets us suss out the significance for ourselves. Lisa Kröger and Melanie R. Anderson are sure to cast a wide net throughout the genres, covering a number of different authors and subgenres within the genres. Each section is divided based on the subgenres, which I liked because it made is so I could give extra focus on the kinds of stories that really tickle my fancy and to hone in on the authors that perfected the stories. While they, of course, cover some of the heavy hitters like Mary Shelley and Shirley Jackson, they also are sure to bring in diverse perspectives, including women like Toni Morrison and Helen Oyeymi, so that the texts discussed and recommended aren’t incredibly white in nature (side note, I loved that “Beloved” was included in this book and Morrison by association. It’s one of my favorite books and at it’s heart it is, indeed, a very effective ghost story). I also got to learn about a number of authors who I had either only heard of in passing, or had never heard of, and because of this I now have added people like Edith Wharton and Anne Radcliffe to my list of ‘must reads’, as well as modern voices like Oyeymi (I will be talking to my Mom so I can borrow her copy of “Boy, Snow, Bird”). Finally, at the end of each biography we get a handy dandy list of books to try out, split into three categories, labeled ‘Not To Be Missed’, ‘Also Try’, and ‘Related Work’. These suggestions are stories by the authors themselves, as well as other stories and tales by different people whose themes are either direct call backs or similar in tone. How great to have a curated and well put together list of suggestions!

It’s also important to note that throughout all of these biographies and personal histories of these women authors, there are hints and senses of the difficulties and obstacles that many of them faced or face as women living at their respective times in their respective societies. These hardships could be due to gender, class, or race, and Kröger and Anderson, while never focusing on it, absolutely acknowledge it and make the reader realize that women voices in the genre have been very important and formative, and yet have been downplayed or, in some cases, almost forgotten (there were a few instances in which an author’s ‘Not To Be Missed’ work was noted as being out of print. How incredibly upsetting).

Any horror or speculative fiction fan ought to do themselves a favor and read “Monster, She Wrote”. You will undoubtedly get some new reading ideas, or gain new appreciation for authors you already love, or authors you have yet to discover.

Rating 8: And informative and expansive history of significant female voices in horror and speculative fiction, “Monster, She Wrote” has a lot of reading ideas and a lot of fun and interesting facts about an array of authors.

“Monster, She Wrote” isn’t on many Goodreads lists as of now (why?), but it is included on “Best Books About Genre Fiction”.

Find “Monster, She Wrote” at your library using WorldCat!