I’m back with yet another reality TV show! Sadly, the American “Amazing Race” seems to have gone down to one season per year, which is just too few bizarre challenges, freak-outs over heights, and fights over airline tickets for me! So, I’ve turned to other versions of the same show. “The Amazing Race: Canada” is pretty much everything you’d expect it to be. Same general format, but a lot more time spent racing in Canada and extolling its wonders, all with a bunch of teams exuding niceness. There’s also a bizarre change in the willingness of teams to take penalties, which seems to be a trait common across all of the seasons I’ve seen so far and very different from the American version where it hardly ever happens. I think there’s an anthropological study to be found here…

When this was announced, it was pretty easy to roll one’s eyes and wait for the inevitable dumpster fire to arrive over which we’d all watch and then never speak of again. However, when it came out, it was met with generally good reviews. I was still skeptical, but nope! It’s actually quite good! I do really like Emily Blunt (and may in the past have gone down one too many YouTube rabbit holes watching adorable interviews with her and her husband John Krasinski) and she’s perfect as Mary Poppins here. Her version is just different enough that one is never caught directly comparing her to the magical Julie Andrews, and the story has the perfect balance of whimsy, heart, and, of course, amazing song and dance numbers. The story does feel a bit more dark than the original and Blunt’s Mary Poppins, too, has a bit more edge, but I think both of these changes served the sequel well in keeping it as its own thing.

Every once in a while I’m in the mood for a good, old, crime odd pair crime procedural. If there’s a long-brewing romance at the heart of things, all the better! I very much enjoyed “Bones” and “Castle” (though each petered out towards the end), and hadn’t really found a replacement in the last several years. I had been eyeing “Lucifer” for a while on Netflix but didn’t know what it was about. For once, those little mini trailers Netflix put up almost put me off of it, as I wasn’t connecting it with crime procedural but more something along the lines of “Tudors” but with the devil instead of Henry VIII. It’s what you would expect in many ways, but Tom Ellis is really the draw here with his charming take on the character and quite pleasing suave accent. It doesn’t hurt that he even sings in a few episodes!

After getting recommendations of this show from both a friend and my own mother, I decided to give “Derry Girls” a try. It’s a comedy that takes place in Derry, Northern Ireland in the mid 90s, when The Troubles were still raging. It follows a group of teenage girls (and one boy, who has to go to the Catholic Girl’s school because he’s English and it’s feared that he’d get beaten up at the Boy’s school) as they go through the usual trials and tribulations, usually with hilarious and awkward results. While the entire cast is amazing, for me the stand outs are the neurotic and anxious Clare, and the jaded and sarcastic Sister Michael, who is in charge of the school. There is also a nostalgia factor for me when watching it, as while I was in elementary school during the time it takes place as opposed to the age as the kids in the show, the soundtrack is definitely filled with songs I LOVED during that era and still love. It also has some well done moments of pathos regarding the violence that was ever present.

I quite enjoyed Season 1 of “Mindhunter”, the David Fincher show about the origins of criminal profiling at the FBI, and while we had to wait a bit for Season 2, it was well worth the wait. Something I’ve noticed about the newest season is that our protagonists, Agents Holder and Tench, are starting to have to deal with the potential problems of profiling as a method of predicting criminal behavior or identification. This becomes more clear as they try to give their insight into the profile of the Atlanta Child Killer, who is murdering black children in Atlanta. The tension is still off the scales during this season, and we also get to see the return of Cameron Britton as Ed Kemper, the Co-Ed Killer who has served as a Hannibal Lecter-esque figure to Holden. On top of all that, Michael Cerveris (aka one of my favorite Broadway actors!) joins the cast! “Mindhunter” is still a stellar true crime procedural and I can’t wait to see where it goes from here. 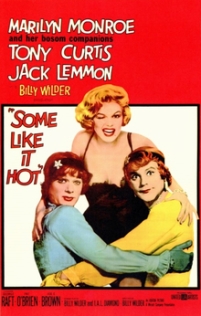 This isn’t a new movie to me. This is a movie that I have loved ever since I was a little kid, as we watched it as a family on many an occasion. But September was something of a stressful and anxiety ridden month for me, and I knew that the best way to alleviate those feelings was to go back and find all the comfort movies I could. “Some Like It Hot” is one of those movies for me, and it still makes me laugh with its wit and charm. Two jazz musicians named Joe (Tony Curtis) and Jerry (Jack Lemmon) witness a mob hit in 1920s Chicago, and in hopes of disappearing they pretend to be women and flee to Florida with an All Women’s Jazz Band. Things get complicated when Joe, or Josephine, falls for fellow bandmate Sugar (played by the iconic Marilyn Monroe), and Jerry, or Daphne (as he never cared for the name Geraldine!) becomes the object of affection for an eccentric millionaire. “Some Like It Hot” is not only very funny and witty, it plays with the ideas of gender and sexuality in ways that were revolutionary (and scandalous) for 1959. And I still dream of having a bestie/confidant like Jerry/Daphne.