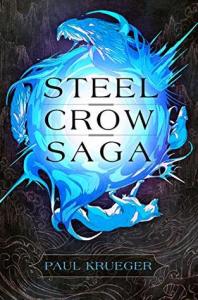 Book Description: A soldier with a curse
Tala lost her family to the empress’s army and has spent her life avenging them in battle. But the empress’s crimes don’t haunt her half as much as the crimes Tala has committed against the laws of magic… and her own flesh and blood.

A prince with a debt
Jimuro has inherited the ashes of an empire. Now that the revolution has brought down his kingdom, he must depend on Tala to bring him home safe. But it was his army who murdered her family. Now Tala will be his redemption—or his downfall.

A detective with a grudge
Xiulan is an eccentric, pipe-smoking detective who can solve any mystery—but the biggest mystery of all is her true identity. She’s a princess in disguise, and she plans to secure her throne by presenting her father with the ultimate prize: the world’s most wanted prince.

A thief with a broken heart
Lee is a small-time criminal who lives by only one law: Leave them before they leave you. But when Princess Xiulan asks her to be her partner in crime—and offers her a magical animal companion as a reward—she can’t say no, and soon finds she doesn’t want to leave the princess behind.

This band of rogues and royals should all be enemies, but they unite for a common purpose: to defeat an unstoppable killer who defies the laws of magic. In this battle, they will forge unexpected bonds of friendship and love that will change their lives—and begin to change the world.

Review: I feel like I was a bit tricked with this one, and really, I can only applaud the marketing team for managing it. The cover, the use of the word “crow,” and the general description of a story featuring a cast of characters who all must work together, though each comes from a very different background, all brings to mind “Six of Crows,” which I loved. Like I said, I’m not criticizing! The marketing is just about getting the reader to pick up the book, and they do what they must to appeal to as many readers as they can. It’s the author’s job to stick the landing and keep the reader invested. And here, sadly, these surface-level similarities didn’t hold true throughout.

With political and cultural clash, comes constantly reforming chaos. And at its heart comes four individuals, each representing their own stake on the future, as they see it. Tala and Jimuro are natural enemies; she a soldier whose family died at the hands of the family from which Jimuro comes. Thrown together, they must now form a tenuous alliance as they journey towards Jimuro’s home. And Xiulan and Lee each have very different priorities. Lee lives by a code of thievery that puts her own needs and freedom above all, while Xiulan, a princess in disguise, plays her own games. Again, two who should be at odds must find a way to come together to complete Xiulan’s mission of regaining her throne.

There are some good bones to this book. The story is marketed as Pokemon meets “The Last Airbender,” and even without being hugely familiar with either, I can see the comparisons. The shades and their connections with the people definitely rings familiar and some of the action sequences with them were quite fun to read. I also liked the overall world-building which is clearly Asian-inspired and attempts to delve into the challenges of changing borders, colonization, and the fall-out when temporary alliances need to be tested in peace time. There’s also some good diversity and representation in the main characters, all handled adeptly and without ado.

But sadly, those bones weren’t enough for me to fall in love with the book. As I said, I did appreciate the basic outline of the world-building, but for a book so long, I still don’t feel like I had a complete grasp on the varying countries and their points of conflict. The two that Tala and Jimuro represent are easy enough (a general conflict over how shades are perceived), but the other two…I’m having a hard time even remembering if we were ever given real motivations to their conflict? If I was, it wasn’t enough to make it stick for me. And without that conflict fully defined, I had a hard time caring.

And you have to care, because this book is long! I appreciate that the author put a lot of thought and care into describing the setting and events taking place in this book, but there does come a point where I feel like it begins to detract from the overall story. This book is nearly 600 pages, I believe. I think it easily could have been around 300 and read much more easily. I had a poetry teacher who always said to take your finished poem and then dip it in an acid bath; whatever remained as necessary made up your truly finished poem. That could be said here as well. Yes, descriptions are important. But they have to be the right ones. And the fact that I’m not clear on some of the central politics at play, but can describe a market scene perfectly means that that balance hasn’t been struck properly.

This carried over to my appreciation of the characters. Again, Tala and Jimuro’s cultural and historical conflict was much more clear from the beginning and their own personal conflict was also better laid out. For the most part, I enjoyed these two’s story as it played out. But at the same time, while the relationship between the other two was compelling, I feel like there wasn’t enough time given to their story to make me care as much about the two of them. I almost think they all would have been bettered served had each pair had their own book instead of cramming them all into one, super long story. All four also seemed very predictable, not offering much new on top of their basic character foundation: prince, soldier, disguised princess, thief.

I struggled with this book. There was both too much and too little at the wrong times for each. I could see a good idea at the heart of it, but I had a hard time working myself up to caring. There are some fun action sequences and the idea of shades and the connections they formed with people was definitely interesting. But the book was too long and the characters too predictable for me to fully immerse myself.

Rating 6: A few flashes of fun but too weighed down by its own length and unremarkable characters to really be a hit.

“Steel Crow Saga” is a newer title so it isn’t on many Goodreads lists, but it is on “Crows and Ravens.”