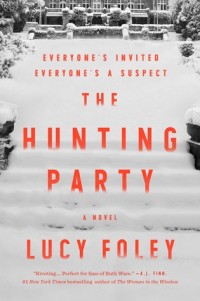 Where Did I Get This Book: The publisher sent me an ARC.

Book Description: For fans of Ruth Ware and Tana French, a shivery, atmospheric, page-turning novel of psychological suspense in the tradition of Agatha Christie, in which a group of old college friends are snowed in at a hunting lodge . . . and murder and mayhem ensue.

All of them are friends. One of them is a killer.

During the languid days of the Christmas break, a group of thirtysomething friends from Oxford meet to welcome in the New Year together, a tradition they began as students ten years ago. For this vacation, they’ve chosen an idyllic and isolated estate in the Scottish Highlands—the perfect place to get away and unwind by themselves. They arrive on December 30th, just before a historic blizzard seals the lodge off from the outside world.

Two days later, on New Year’s Day, one of them is dead.

The trip began innocently enough: admiring the stunning if foreboding scenery, champagne in front of a crackling fire, and reminiscences about the past. But after a decade, the weight of secret resentments has grown too heavy for the group’s tenuous nostalgia to bear. Amid the boisterous revelry of New Year’s Eve, the cord holding them together snaps. Now one of them is dead . . . and another of them did it. Keep your friends close, the old adage goes. But just how close is too close?

Review: Thank you to William Morrow for sending me an ARC of this novel!

Though we’re pretty much now fully into summer here in Minnesota, to me one of the best seasons for a tangled mystery to take place is the wintertime. There’s something about the snow and cold that really gets a plot going. So while it took me a little while to get to “The Hunting Party” by Lucy Foley, I felt like I saved it for the exact right time. I don’t like the weather that comes with summer, so a story set during colder months was exactly what I needed.

I think that the comparison to both Ruth Ware and Agatha Christie is spot on. The setting itself, in a remote lodge area in the Scottish Wilderness, is the perfect backdrop for a story like this; it’s isolated, it’s haunting, and the vast wilderness feels like a cage when it comes down to it. Throw in a harsh snowy winter and you get an even harder place to escape should you need to. The characters, too, feel like people out of a Christie or Ware novel, as they are a group of friends who have known each other for years, but conflicts, secrets, and resentments are starting to boil over. We get a few different perspective chapters, some told in the past (the days leading up to the death) and some in the present (the discovery of the body and beyond). In the present we have Heather and Doug. Heather is the manager of the lodge, who has been trying to forget a tragedy from her recent past, and Doug is the gamekeeper, and he seems like he could be mysterious or dangerous. In the past we hear from Miranda, the effervescent queen bee of the group, Katie, her dutiful and passive best friend, and Emma, the woman who joined the group late and is trying to put together the best retreat she can. It becomes clear as time goes on that all of these characters are hiding something, and Foley slowly and effectively teases the answers out of them while also giving the reader satisfying and interesting characterizations. I was especially taken with Miranda’s POV chapters, as while she is definitely a bit spoiled and has a true mean streak, we also get to see into her mind and how her own insecurities and personal tragedies have made her into the person she is now. It would be easy to make her simply a cruel bitch, but more often than not I found myself sympathizing with her. One might think that juggling all of these perspectives would be tricky, but Foley does a great job of it, seamlessly keeping all the balls in the air and revealing what she wanted about them only when she was ready.

The mystery too was well done and kept me going. We know from the get go that one of the guests has been found dead on the property, but we don’t know who it is. By slowly peeling back the story in both present and past orders, it carefully becomes clear who is dead, but the motivation to kill could be coming from any character, and many hints are misdirection. There were a number of times where I was probably falling right into the trap Foley set with my guesses, and while I did ultimately guess the correct answer before it was revealed, it wasn’t too far from the big reveal moment. It was also still fun seeing all the puzzle pieces slowly fit into place, especially since there were a number of other secrets to be revealed along the way. I was also legitimately surprised by a couple of these secrets, which is always fun!

“The Hunting Party” may take place in a cold climate and could be a good fireplace read, but I think that it’s also going to be a great beach read for the summer traveler.

Rating 8: A suspenseful and well plotted mystery with compelling characters and many twists, “The Hunting Party” is a fun thriller just in time for summer!

“The Hunting Party” is included on the Goodreads lists “Books Set in Scotland”, and “Psychological Suspense for 2019 (January-June)”.

Find “The Hunting Party” at your library using WorldCat!