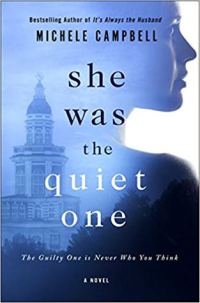 Book: “She Was The Quiet One” by Michele Campbell

Where Did I Get This Book: An eAudiobook from the library!

Book Description: From the author of It’s Always the Husband comes a riveting new suspense audiobook about privilege, power, and what happens when we let ambition take control.

For Rose Enright, enrolling in a prestigious New England boarding school is the opportunity of a lifetime. But for Rose’s vulnerable twin sister Bel, Odell Academy is a place of temptation and danger. When Bel falls in with a crowd of wild rich kids who pressure her into hazing Rose, the sisters’ relationship is shattered. Rose turns to her dorm mother, Sarah Donovan, for advice. But Bel turns to Sarah’s husband Heath, a charismatic and ambitious teacher. Is Heath trying to help Bel or take advantage of her? In a world of privilege, seduction, and manipulation, only one sister will live to tell the truth.

In an audiobook full of twists, turns, and dark secrets, Michele Campbell once again proves her skill at crafting intricately spun and completely compelling plots.

Review: Michele Campbell was an author who came out of nowhere for me. I saw the book title “It’s Always the Husband” on my twitter feed, and such a bold statement (that, sadly, feels all to true sometimes) as a book title absolutely caught my eye. I requested it on audiobook, and when I was finished with it I was, for the most part, happy with it, and therefore chomping at the bit for whatever story Campbell would come out with next. So when I saw “She Was The Quiet One” pop up on my Goodreads feed, I had to request the audiobook post haste! Not only was it a new book by a promising thriller author, it also took place at a BOARDING SCHOOL! A BOARDING SCHOOL FILLED WITH SCANDAL AND AWFUL PEOPLE!

I had to wait since I opted for an eAudiobook, but when “She Was The Quiet One” finally came in, I started it, expecting to have the same interest as I did to the previous novel. That is, a nice listen while driving from Point A to Point B, or while at the gym. What I didn’t anticipate was not turning my phone off when I was done with those fleeting moments, and continuing to listen while in the walls of my home. That kind of devotion is usually reserved for podcasts, but the likes of “My Favorite Murder” and “Last Podcast on the Left” took backseat to an audiobook. Yes, “She Was The Quiet One” was that addictive.

The structure of this novel is told from a few different perspectives. The first two are of Rose and Bel Enright, the twin sisters whose mother’s death has sent them to live with an estranged grandmother, and then be shipped off to an elite boarding school. These fraternal twins are not only different in appearance, but also personality, as Rose is driven and ambitious and Bel is sullen and rebellious. We know from the jump that one of them is dead, and it’s through their flashbacks that we start to get the story of what happened. The next perspective is that of Sarah, a math teacher at the exclusive boarding school Odell Academy, and the wife of Heath, an English teacher there. They are also the heads of the Moreland dorm, the building where Rose and Bel are housed, and the ‘problem’ dorm because of the most spoiled students living there. The final perspective is that of police interviews in the wake of the death of one of the twins. As these four perspectives come through the pieces of the expansive mystery fall into place at a compelling pace, and they each revealed themselves precisely when needed. More often than not I can see various twists and turns coming from a mile away, but in “She Was The Quiet One” I felt as though I was kept guessing, for the most part. Sure, here or there I was able to guess, but not to the point where I was bored. On the contrary, even if I did guess right I loved the journey of getting to the solution so I didn’t feel short changed.

All of the perspective characters had their distinct voices and personalities, and while none of the perspective characters were ‘likable’ per se, I did find all of them to be realistic, and had empathy for all of them and was invested in their various outcomes. And Campbell did a good job of capturing the various hardships that both Rose and Bel faced, and while they were on completely different ends of the conflict at hand, I understood both of their perspectives and sympathized for both of them. Even when I wanted to shake them. Sarah, too, was a character that I had complete sympathy for, even when she sometimes drove me mad with her decisions and her inability to see stark truths in front of her face. While the twins had a more compelling story, hers was also an important one to the ultimate narrative. The supporting characters felt more two dimensional to me. From the wretched popular girls Bel was hanging out with to the ambiguous (for awhile) Heath, none of them showed much depth beyond the plot points that they needed to fill. What Heath had going for him was that we got to see multiple perceptions of him depending on who the perspective was from, but in the end he has a very specific characterization that falls into familiar tropes of the thriller genre of this ilk.

January LaVoy was the audiobook narrator for “She Was The Quiet One”, and I thought that she did a superb job with the cast of characters and the tone. She had very distinct voices for each person, and her emotions really came through during the highest moments of tension.

And I also need to mention a content warning: there is a scene in this book that depicts a rape. It isn’t very long and it isn’t terribly graphic, but it was uncomfortable and hard to listen to.

“She Was The Quiet One” is another addictive and compelling thriller mystery from an author that thriller fans really ought to be familiar with. If you haven’t picked up Michele Campbell yet, this is the book to read.

Rating 8: An addictive and immersive thriller that hit all of my reading guilty pleasures, “She Was The Quiet One” was a book that I almost couldn’t put down.

“She Was The Quiet One” is included on the Goodreads lists “Twin Thrillers”, and “The Best of Prep”.

Find “She Was The Quiet One” at your library using WorldCat!