Well we know that we live in Minnesota, but honestly, it’s hard not to be discouraged when a giant snowstorm comes through your state and dumps a lot of slushy, cold, and somehow brown snow on your head in the middle of April. Because of this frustrating turn of events, here are some book titles that will hopefully remind the winter doldrums that Spring is supposed to be here.

Because what says Spring more than a garden filled with flowers? That isn’t to say that the garden in this novel started out that way, at least when first introduced. But when headstrong orphan Mary Lennox arrives on her uncle’s estate and finds him to be isolated and her wheelchair bound cousin tucked away, she soon discovers a long forgotten garden that becomes a symbol of imagination and hope. This classic has endured in the century since it was first published, and has become a well loved tale of family, love, and not giving up on the kindness of those around you. The regrowth and rebirth of the garden is the perfect image to say goodbye to winter.

Book: “We Were Liars” by E. Lockhart

Though this technically takes place in summer, any warm weather is looking good at this point. If you like the sound of a summer beach home right now, and are looking for a YA thriller with a lot of twists and turns, “We Were Liars” could be a good escape from the lingering cold. Cadence Eastman is a wealthy and privileged teenage girl whose family has gone to their summer estate on an island every year. But during her fifteenth summer something happened to Cadence that she can’t remember. As she tries to adjust to being back on the island and fall back into routines with her friend group called The Liars, including cousins Mirren and Johnny, and family friend Gat. But it seems like everyone may be hiding something from her. And Cadence wants to find out the truth of what happened, and hopes that she and her fellow “Liars” can help her remember.

Book: “Hades: Lord of the Dead” (Olympians #4) by George O’Connor

It may be called “Hades: Lord of the Dead”, but this children’s graphic novel is really about Persephone and her journey to the Underworld to be Hades wife. This is an adaptation of the tale of Persephone, who was taken to the Underworld to become Hades wife, and her absence left her (domineering) mother Demeter so distraught she brought eternal winter. The deal made between Persephone and her mother eventually led to the explanation for the change of the seasons, as when Persephone returns to her mother’s side, Spring arrive. While some people don’t like the Persephone and Hades romance, at it’s heart it’s a story about change, transition, and growing up, and O’Connor does a good job of giving Persephone, the goddess of Spring and also the Queen of the Underworld, some agency in her story. 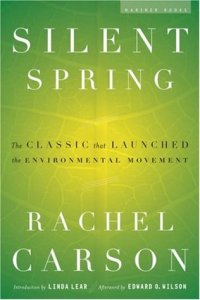 A bit of a downer to put on this list, but still far too relevant to ignore, “Silent Spring” is the legendary environmentalist book that opened people’s eyes about the consequences of pollution. Rachel Carson wrote this book as a warning to America about what chemicals in our environment can do, and because of it many reforms were passed to help ease the damage that corporate interests were doing to the world around us. It also helped lead the charge in developing the EPA. One of the things that people associate with spring is the sound of the bird songs that happen after our avian friends have returned from a long winter away, and the title alone gives a chilling idea as to what it would mean if the birds, thanks to DDT and other pollutants, were no longer around to listen to. Given that there are more concerns about environmental issues being raised and the consequences of pollution on our world, “Silent Spring” is still an important read.

What books get you in the mood for Spring? Let us know in the comments!

2 thoughts on “Say NO! to Snow: Books To Bring Back Spring Feelings”