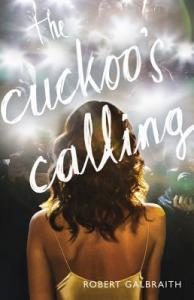 This week we’re bringing to you a special, all-week review series of Robert Galbraith’s (aka J.K. Rowling’s) “Cormoran Strike” books. As we both like mysteries, especially when they are combined with thriller-like components, we’ve each been avidly reading the series since the first book released in 2013. And like other fans, we’ve just been dying during the horrendous 3-year wait that has come between the last book and the most recent entry, “Lethal White,” which released this last September. So this week, Monday through Thursday will be devoted to our joint reviews of all four books now released in the series. And to round out the week, on Friday we’ll be joint reviewing the BBC series “Strike” that has covered the first three books in the series so far. Today we start with the first book in the series, “The Cuckoo’s Calling.”

Where Did We Get this Book: Serena owns it, Kate borrowed it from the library.

Book Description: After losing his leg to a land mine in Afghanistan, Cormoran Strike is barely scraping by as a private investigator. Strike is down to one client, and creditors are calling. He has also just broken up with his longtime girlfriend and is living in his office.

Then John Bristow walks through his door with an amazing story: His sister, the legendary supermodel Lula Landry, known to her friends as the Cuckoo, famously fell to her death a few months earlier. The police ruled it a suicide, but John refuses to believe that. The case plunges Strike into the world of multimillionaire beauties, rock-star boyfriends, and desperate designers, and it introduces him to every variety of pleasure, enticement, seduction, and delusion known to man.

When I picked up this book, it was a few month’s after its release and the cat was already out of the bag about Rowling being the author behind the pen name of this new detective series. And I’ll admit, that was a factor in my picking it up originally. While I love mysteries, I typically find myself reading historical mysteries rather than contemporary detective stories. But past giving me the extra nudge to pick up this book, I can honestly say that the story and characters captured my attention immediately, in no way needing any latent HP nostalgia to keep me invested.

Though I will speak a little more to that point to say that none of us should really have been surprised to see Rowling go in this direction. There were many components that worked together to make the Harry Potter series special, but one of the ones that often gets swept aside in talks about the amazing fantasy world and the characters that captured the hearts of so many is just how clever Rowling was when stringing together detailed and complex mysteries. Not only did each book contain multitudes of false leads and little clues scattered where you wouldn’t think to look, but the series as a whole read as an even larger and more complex mystery of its own. But here in “The Cuckoo’s Calling,” free from the trappings of fantasy and YA/children’s literature (much love to ya!), we really get to see Rowling flex her muscles.

The mystery itself is so incredibly rich. Throughout the story, we explore a vast network of secrets and deceptions, wrapped in familial, professional, and personal trappings. Lula, a supermodel whose life was seemingly led in the public eye; why would she commit suicide? The other apartment renters in her buildings; were they connected and what did they see? And throughout it all, the smallest details remain important. I like to pride myself in being able to pick apart most plots and anticipate twists (most commonly in TV shows and movies, but also books) and here, every time I thought I was on to something, nope! As mystery readers, we’re trained to keep an eye for every little clue and yet somehow, things were still snuck right by me, under my nose. Like a well-trained magician, we’re all too often left watching the wrong hand during the trick itself.

So yes, the mystery was on point. But what really drew me into the series were the complicated main characters at its heart: Cormoran Strike and his temporary assistant, Robin. Re-reading this series now after following it for several books more, it really struck me the depths of character that was built into each even this early. Most importantly, we are given details that make both of these characters feel like real people, with real lives and real flaws. And yet, in this book, we’re only scratching the surface! And sue me, but I was all over the foundation for emotional drama that is laid out in this book, both with Strike’s ex and Robin’s fiance, and of course the partnership and friendship that builds between them both. Yes, my hatred of Matthew was established early, but look, giving us a guy to despise is just as key to sucking in devoted readers as giving us heroes to root for. I’m not just here to see what happens between Strike and Robin, but I want to see Matthew go down!

I missed the “Harry Potter” craze back when the books were first being published. I probably thought that I was too cool to be reading a ‘kids’ book when I was solidly in high school, and while I did eventually read the series, the anticipation of the next book coming out was never a feeling I experienced. But when it was leaked that J.K. Rowling was the actual name of Robert Galbraith, the author of a mystery series about a detective named Cormoran Strike, I decided to check it out. And now, a few years later, I’ve found myself waiting on pins and needles for the next Cormoran Strike book to come out. So good job, Rowling. You eventually got me. And it all started with “The Cuckoo’s Calling”.

The thing that I loved about this book the first time I read it was that while it was solidly dark, and absolutely a noir mystery, the main characters were so appealing and interesting that I was immediately invested in their lives even beyond the case at hand. Cormoran Strike is the first of these protagonists, a veteran turned private eye who lost his leg while deployed to Afghanistan. He’s a bit slovenly, a bit of a curmudgeon, and filled with snark and a little bit of angst. The second is Robin Ellacott, a woman who takes a temp position as Strike’s assistant, and then gets completely sucked into this job and the case of Lula Landry’s death. Robin is smart and kind, and also very much a go getter who has higher ambitions than those around her (particularly her dipshit fiancé Matthew) realize. And when you combine the two you get a nearly perfect team and perfect foils for each other. Cormoran treats Robin with the respect of an equal, while Robin brings in a fresh perspective when it comes to investigating the Lula Landry case. Their partnership and eventual friendship is charming and lovely, and I would happily just read a novel where they went on a non-crime related adventure.

The case of potentially murdered model Lula Landry is the main plot of this book, and Galbraith sets up a solid mystery with a lot of viable suspects. When I first read it I was kept guessing as to who the culprit could be, and Galbraith made it so that all of them had good motives and lots of questions in their backgrounds. But they also felt like real people as opposed to cardboard cut out distractions or red herrings. The way that Strike interacts with them, and the way that he and Robin slowly hunt for clues and piece together the mystery, was always interesting and never slogged or dragged. And I was genuinely shocked by the solution. I also thought that Galbraith did a good job of portraying the ins and outs and ups and downs of the fashion industry, and how elite, and dark, it can be. Lula was constantly objectified and molding herself into what an ad or a designer would want, and it’s only after her death that the world started to see just how being a blank canvas, in multiple ways, could be damaging.

I knew once I set down “The Cuckoo’s Calling” that this was a series that I was going to love. I was waiting on pins and needles for whatever Galbraith came up with next.

Serena’s Rating 8: An excellent start to a series! The mystery kept me guessing and my eternal love for Strike and Robin was cemented early and firmly.

Kate’s Rating 8: This is a very solid beginning to a great series! I was completely taken in by the mystery, just as I was taken in by the goodness that is Cormoran Strike and Robin Ellacott!

“The Cuckoo’s Calling” is on these Goodreads lists: “Best Crime & Mystery Books” and “Mysteries For Deep Thinkers.”

Find “The Cuckoo’s Calling” at your library using WorldCat!