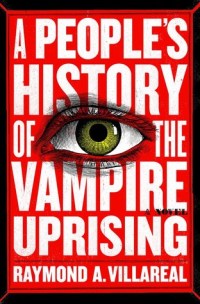 Book: “A People’s History of the Vampire Uprising” by Raymond A. Villareal

Where Did I Get This Book: I received an ARC from the publisher.

Book Description: A virus that turns people into something somehow more than human quickly sweeps the world, upending society as we know it.

This panoramic thriller begins with one small mystery. The body of a young woman found in an Arizona border town, presumed to be an illegal immigrant, walks out of the town morgue. To the young CDC investigator called in to consult the local police, it’s a bizarre medical mystery.

More bodies, dead of a mysterious disease that solidifies their blood, are brought to the morgue, and disappear. In a futile game of catch-up, the CDC, the FBI, and the US government must come to terms with what they’re too late to stop: an epidemic of vampirism that will sweep first the United States, and then the world.

Impossibly strong, smart, poised, beautiful, and commanding, these vampires reject the term as derogatory, preferring the euphemistic “gloamings.” They quickly rise to prominence in all aspects of modern society: sports, entertainment, and business. Soon people are begging to be ‘re-created,’ willing to accept the risk of death if their bodies can’t handle the transformation. The stakes change yet again when a charismatic and wealthy businessman, recently turned, decides to do what none of his kind has done before: run for political office.

This sweeping yet deeply intimate fictional oral history–told from the perspectives of several players on all sides of the titular vampire uprising–is a genre-bending, shocking, immersive and subversive debut that is as addictive as the power it describes.

Review: I want to extend a special thanks to Mulholland Books for sending me an ARC of this novel.

It’s been awhile since I’ve read vampire fiction. I don’t know if it’s because the pop culture fascination with vampires has waned again and not much has come out, or if I have just been oblivious to what new offerings are out there. But when I saw that “A People’s History of the Vampire Uprising” was about to come out, I was immediately interested by the premise. I liked the book “World War Z” by Max Brooks, which is a similar premise, but with zombies, and was curious to see how such a thing would be done with vampires.

“A People’s History of the Vampire Uprising” feels like an amalgamation of “World War Z”, “The Strain”, and Charlaine Harris’s “Sooki Stackhouse” series, a brew that comes together to make a fairly unique new vampire mythos. We follow a few different perspectives and plot points as the rise of the NOBI Virus is laid out on the page. Once a person is infected with NOBI, they have a fifty fifty chance of transforming into a ‘gloaming’, a being that has gained a longer lifespan and other supernatural abilities, but cannot survive in the sunlight and must feed off of blood. This story postulates less of an immediate vampire apocalypse, and more of a slow shift as they appear to try to integrate into modern society. It’s a more in depth analysis than the “Sookie Stackhouse” books gave, and a bit more cynical as well. Villareal is far more interested in how this kind of shift would affect the laws and civil liberties of modern societies, and he has a number of characters who fall on either side of the gloaming ‘issue’. These characters include CDC Investigator Dr. Lauren Scott, the woman who was on the scene when Patient Zero, Liza Sole, is found along the U.S.-Mexican Border, only to escape into the night. Another is Father John Reilly, a Catholic Priest who is going through his own journey regarding the rise of ‘gloamings’ and how it’s changing society. We also follow Joseph Barrera, a political wunderkid and spin doctor who is approached to run the gubnatorial campaign for Nick Claremont, a gloaming who wants to become Governor of New Mexico, and Hugo Zumthor, and FBI Agent whose field is mostly gloaming issues. Along with various perspective sections with these characters we get newspaper articles, message board posts, transcripts, and interviews that slowly show how NOBI rises and changes society over the course of a few years. My favorite parts were definitely the ones that involved Lauren, as the description of the NOBI virus was fascinating and reminded me of “The Strain” series in the virology of this kind of vampirism.

I also enjoyed the various ethical and philosophical debates that Villareal brings up in this book that have been glossed over in other similar stories. The debates of gloamings being able to have similar rights as humans, and the question of tolerance and equity and how to accommodate for this new population, are addressed and waxed poetic in this book, and the legal and cultural perspectives were in depth and well laid out. I enjoyed that Villareal made it a complex and grey issue, with various likable characters having deep prejudices, but also having fair questions and reservations about gloamings and what their ultimate motivations are. Especially as they start coming into positions of power, and what that power does and what it means for the shared space between humans and gloamings alike. Villareal dives a bit deeper into the legal and policy aspects of this quandary than “World War Z” did in its ‘history’, and while it was mostly fascinating sometimes it felt a little bloated, as did some of the medical aspects that come with the description of the NOBI virus. Because of this, at times I was thinking that it was a bit tedious to get through, though overall it was neat that Villareal went the extra steps into the philosophy behind it all.

Overall I enjoyed reading “A People’s History of the Vampire Uprising”, and it’s a notable contribution to modern vampire lore. You will need to go in expecting a deeper dive than what you usually find in the genre, but ultimately it’s worth taking a look if you are a fan of vampires and vampire mythos.

And good news! I’m giving away an ARC edition of this book! Given that it’s on a number of ‘Hot Summer Book’ lists, this book is bound to be the talk of the town this season!

Rating 7: A solid tale in the tradition of “World War Z”, “A People’s History of the Vampire Uprising” is a creative new take on the vampire mythology.

“A People’s History of the Vampire Uprising” is fairly new and not on many Goodreads lists yet, but it is included on “June Buzz Books”, and I think that it would fit in on “Not The ‘Normal’ Paranormal”.

Find “A People’s History of the Vampire Uprising” at your library using WorldCat!