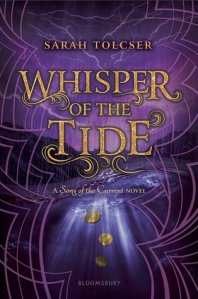 Book: “Whisper on the Tide” by Sarah Tolscer

Book Description: Caro Oresteia spent her life waiting to be called by the river god, as those in her family had been for generations. But when she’s swept away on an adventure to save the Akhaian royal prince, Markos, her destiny is sealed by the sea god instead.

For now, Caro is landlocked, helping Markos reclaim his throne after nearly his entire family was assassinated in a political coup. Without any financial or military support, Markos is desperate for allies, and Caro has fought off more than one attempt on his life. When a powerful Archon offers his army in exchange for Markos’s marriage to his daughter, Caro must choose: Her love for Markos, or the fate of Akhaia? And more importantly: How much is she willing to risk to defy the sea god’s wishes and chart her own course?

Previously reviewed: “Song of the Current”

Review: Remember a time, not so long ago, when “Pirates of the Caribbean” was actually acclaimed and not a national joke? I mean, those first few movies were a blast! I may, may,  have even seen the first one in theaters three times. I remember being almost giddy over just how much unadulterated, unquestioned fun that first movie was offering up. Adventure! Romance! Great characters! And some top notch humor that the other films never seemed to really understand or replicate in all the many, MANY, iterations that followed. So you can imagine just how thrilled I was when I discovered about halfway through this book, that “Whisper on the Tide” was essentially what you’d get if you took that first movie and then took Kiera Knightley’s character from the third movie, but actually made her, you know, a good character and had her run the show.

While Caro has finally discovered her true calling, with the goddess of the ocean in her ear and a ship to her name, her time of late has been spent decidedly NOT at sea. After pledging herself to help Markos regain his lost throne, she’s recently discovered that much of what this help is made up of is running a few messages here and there and sitting through various speeches and rallies while Markos looks to drum up support for his cause. And all is not going well. The ocean god is displeased with Caro’s lack of sea time adventures and Markos few followers are pushing towards a marriage of convenience that would bring in much needed support. Caro has more and more difficulty seeing a path forward that allows her to keep both of her loves, the sea and Markos himself.

For all that the description of the story, both mine and the official one, puts a lot of weight on Caro’s decision about her future, part of what has made me like this series so much so far is Caro’s no nonsense approach to life and decision making. She doesn’t wilt away from tough choices and she is endlessly practical. In many ways, she sees her ability to make hard calls as her biggest asset to Markos, whom she often derides as getting too caught up in the emotions of things. Here, these character traits move the story along and keep it from being marred in the emotional duldrums of soap opera-ness that could have come about with a different character in this situation. But what makes it all the better is that through this book, Caro must learn that her own practicality and willingness to follow the harder path is not always a boon.

In short order, she’s back out on the ocean and beginning to understand how very little she knows of life as a sea captain, for all that she has her own ship and the ear of the sea goddess. The action never lets up and Caro’s adventures are filled with everything you’d want from a pirate adventure. We have storms, and ships sinking, and maroonings on islands, and lost treasure, and pirate lairs. Really, like I said at the beginning, all the best parts of the “Pirates of the Caribbean” movies, though each with their own unique spin and connection to the larger plot.

For secondary characters, we sadly saw much less of not only Markos, but Caro’s magic-wielding cousin, Kente, was also out of commission much of the time. But what we did get from her was integral to the plot, and I liked the the fact that she had a role at all, as with the way the last book ended, I wasn’t sure we were going to see more from her. Markos, also, was abscenfor much of the middle portion of the book. I was ok with this. I still very much enjoyed the romance between him and Caro, and their banter and Markos’ own cluelessness about certain things were still some of the most fun pieces of dialogue in the story. However, by sidelining him and their romantic entanglements, Caro was given the space and time to really come into her own as a character and drive the plot on her own.

This also gave room to add a surprising new (?) character who I had not expected to see at all. I don’t want to spoil it, but I thoroughly enjoyed this addition and the character added a much needed sense of ambiguity and moral greyness to an otherwise fairly straightforward adventure story. To continue the “Pirates” compariosons, if Caro is Elizabeth and Markos is Will, this new character was Jack Sparrow and lived up to the utter delight that any character should be if trying to fill that role.

I also greatly enjoyed the expanded idea of Caro’s relationship with the sea god. While we heard a lot about the river god and the solid, calm prescense that he transferred to those who were chosen by him, we only briefly met the sea god in the last book. And true to the nature of the sea, she is much more volatile and unpredictable than the god of the river seemed to be. I was relived that she wasn’t reduced to just another magical ability for Caro, but given her own agendas and whims that often came into conflict with Caro’s. Their ongoing battle of wills was a large secondary driver of much of the story and I was very pleased with how it played out.

In the end, I enjoyed this book even more than the first. While “Song of the Current” had a slow start, this one jumped right into the action and never let off the gas pedal. Caro was her same sassy self, but was given more room to proactively drive the plot herself this go around. I still very much enjoyed the romance, but was pleased to see that it played second fiddle to the action and adventure. And between the ocean god and the surprise Jack Sparow-esque character, there was enough double crossing and cross purposes to keep readers on their toes about what would be coming next. If you enjoyed the first book, I’m sure you’ll love this one!

Rating 9: Take all the good parts of the “Pirates” movies, make them even better, and turn it into a book and ta da!

“Whisper on the Tide” is a new title, so it isn’t on many relevant Goodreads lists, but it is on “Teen Pirate Books.”

Find “Song of the Current” at your library using WorldCat!

4 thoughts on “Serena’s Review: “Whisper on the Tide””