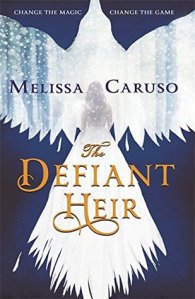 Where Did I Get this Book: ARC from the publisher!

Book Description: Across the border, the Witch Lords of Vaskandar are preparing for war. But before an invasion can begin, they must call a rare gathering of all seventeen lords to decide a course of action. Lady Amalia Cornaro knows that this Conclave might be her only chance to stifle the growing flames of war, and she is ready to make any sacrifice if it means saving Raverra from destruction.

Amalia and Zaira must go behind enemy lines, using every ounce of wit and cunning they have, to sway Vaskandar from war. Or else it will all come down to swords and fire.

Review: I was so excited when I received an ARC for this sequel! “The Tethered Mage” came out of nowhere last fall and quickly became one of my favorite reads for the year, so I was so excited to see what antics (troubles?) Amalia and Zaira would get themselves into this time. So much so, that I brought this book along with me on vacation, which was probably not the best choice since it actively distracted me from all of the “real vacationing” I was apparently supposed to be doing. It’s a lenghty book, and yet, somehow, I zipped right through it!

After the events of the last book, Amalia has proven herself a capable heir to her mother, La Contessa, and finds herself further enmeshed in the difficult and morally challenging workings of her country’s ongoing conflicts with their dangerous neighbors to the north. Zaira, too, while still straining against the restrictions of her new life, is also beginning to develop some type of feelings (oh no!) for the Falconers and Falcons around her. As the Witch Lords continue to make threatening moves against Raverra, Amalia and Zaira once again find themselves in the middle of the action. But this time they’re also in the middle of an enemy nation with only the hope of help from a Witch Lord himself who claims to be courting Amalia, but seems to also be hiding plans of his own.

This book does everything a good sequel should do. The stakes are raised in literally every aspect of the story. Plot and action? Well, not only is there a threatening volcano looming over the country ready to blow at any minute, but we get to meet the Witch Lords themselves in all of their terrifying glory! Magic? Said Witch Lords are super creepy with a complex magic system of their own that ties their powers to each other and the land they rule. Characters? Not only does Amalia’s and Zaira’s relationship remain the solid focus of character growth, but it continues to build, even when hindered by the morally challenging nature of their bond. Beyond their bond, both Amalia and Zaira have relationships of their own to deal with.

Zaira continues to struggle with vulnerability and trust, drawn to a fellow Falcon, but also lashing out in the way of a trapped animal who has been hurt too many times to recognize a kind hand being offered. I loved the exploration of Zaira’s growth. After the last book, we know the price that Zaira has paid with past experiences of becoming close to others and the tragic results that occurred. Her distrust is not only of others and their intentions, but mostly of herself. For all of this, she is not let off the hook by those around her when she takes it too far and truly hurts those who care for her. Zaira’s story was full of tenderness, heartbreak, and ultimately, hope.

For her own part, as the primary protagonist, Amalia’s own experiences and relationships are exponentially increased in this book. I still love the relationship that has been built between her and her powerful mother which is still a breath of fresh air in a book world full of orphans or evil step mothers. But in this book, the more important relationships are those driven by her relations from her father’s side, both her maternal grandmother who rules a vassal state in Raverra, as well as the line through her grandfather that reaches back to the Witch Lords themselves. Further, after deciding in the last book that she must remain single and detached in order to pursue political connections through courtship, there is an ongoing tension and struggle with her beloved Marcello. Especially when a certain charming and mysterious Witch Lord arrives on the scene and proposes a courtship, something that Amalia recognizes as incredibly powerful and useful in this time of trouble between their nations.

Amalia is not only the heart of these books, but her strong characterization is the glue that holds it all together. I keep using the word “refreshing” but it is truly how I feel about both of these books, mostly due to the way that Amalia is written. She has strong female friendships. She loves Marcello deeply, but is aware of her own role in the world and her duty. And while this pains her incredibly, she doesn’t shy away from the sacrifices that this life requires of her. Throughout this book, her realization of what it really means to be a Cornaro becomes strikingly clear. Through her, the story engages with many challenging topics, including sacrifice of individuals for the good of the whole, political compromise, and what it looks like to work within a system that is made up of people, with their own faults and agendas.

Beyond the characters, I loved the action of this book. Much of it takes place across the borer in the domain of the Witch Lords. In the last book, we only heard loosely about them and had only the horrid Ruven with his ability to control human flesh as an example of their abilities. Here, we are exposed to them all in their full power and we begin to realize the true challenge that Amalia and co. are up against. Further, (again, refreshing!) Amalia is still an unpowered young woman. Her strengths lie purely in her ability to maneuver through political situations, her bookworm-ish knowledge of magic, and her own ability to speak well and convincingly. And in a kingdom that values the ability to wield magic above all else, this skill set is even a harder one to put to use effectively.

The story doesn’t shy away from the gruesome and heartbreaking aspects of a looming war. There is a lot of death, and the Witch Lords and their power over their land is an effectively horrifying threat. I was a bit concerned with the entrance of said Witch Lord suitor, that we might be getting a love triangle. But I very much enjoyed the direction that this aspect of the story went. Again, Amalia as a character is written to handle the challenges and temptations of all of this in probably the most realistic manner I’ve read, as far as “love triangles lite” go.

I really loved the first book in this series, so it says a lot that I came away from this one knowing without a doubt that I loved it even more. Both of these books are must reads for any fan of fantasy fiction featuring strong women characters!

Now it your turn to get your hands on this brilliant sequel! I have an ARC copy up for grabs! Giveaway runs through March 27, 2018 and is open to US entrants only.

Rating 10: Absolutely brilliant! Heart-breaking and grounded, this series has given us not only one, but two new heroines to root for!

“The Defiant Heir ” is a new book so isn’t on many Goodreads lists, but it is on “Best Fantasy World.”

Find “The Defiant Heir” at your library using WorldCat!