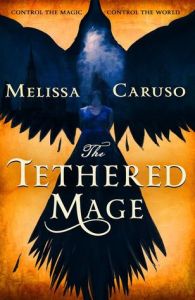 Book Description: In the Raverran Empire, magic is scarce and those born with power are strictly controlled — taken as children and conscripted into the Falcon Army.

Zaira has lived her life on the streets to avoid this fate, hiding her mage-mark and thieving to survive. But hers is a rare and dangerous magic, one that threatens the entire empire.

Lady Amalia Cornaro was never meant to be a Falconer. Heiress and scholar, she was born into a treacherous world of political machinations.

But fate has bound the heir and the mage. And as war looms on the horizon, a single spark could turn their city into a pyre.

Review: My first props (of many to come) for this book is to whomever designed the cover art. I’ve ranted in the past about cover art tendencies in which publishers try to piggy-back off the designs of other popular books, regardless of whether or not that style or art subject matches the topic of the actual book they are producing. And yes, I know that it’s a business, and I understand the marketing behind it. But that’s the case with every cover art decision ever, and “The Tethered Mage”‘s cover art shows that publishers are perfectly capable of creating unique, pertinent, and striking art for an individual book without needing to reference others to sell. I knew next to nothing about this book, but clicked through to read the description based on this art alone, and largely this was due to its originality. I hadn’t seen a book like this before, therefore I didn’t have expectations going into checking outs its details.

My second props comes for this same originality carrying throughout the book itself. I may not have had many expectations from the art, but reading the descriptions, I had a few guesses (concerns) about the story. Yet another fire mage with a “past.” Likely a duo protagonist situation. Two women protagonists, none the less, creating potential for the ever-dreaded competitive women themes. But almost immediately after reading the first few chapters, I was ecstatic to realize that not only some of these assumptions, but all of them, were completely off base.

While the story does focus on these two women, it is told only from the perspective of Amalia Cornaro, a young woman who is in line to inherit her powerful and canny mother’s position on the Council of Nine, a group of nobles who essentially rule the land. But when she helps a young Captain bring a fire mage under control, she finds herself in a precarious position, the Falconer of the only current fire mage in the realm, and one who had done her best to avoid capture her entire life. Now Amalia must not only win the friendship of this wary and angry young woman, but larger forces are moving within the Empire, threatening its peace and tempting its rulers to now use this suddenly gained powerhouse of a Falcon/Falconer duo, regardless of said Falcon/Falconer’s opinions on the matter of burning down entire cities.

I loved that this story comes from Amalia’s point of view. While I like the magical aspects of fantasy fiction as much as the next person, I have been finding myself growing a bit weary with the fire mage young woman protagonists who litter the genre, currently. No exaggeration, I’ve read three books in the last month that feature a young woman fire mage of some sort.

But while Zaira is a focal point of the story, and gets an intriguing arc of her own, she’s secondary to Amalia, an ordinary young woman who is beginning to understand the burden she will be inheriting as an up-and-coming political leader. She’s also a scholar who, while not magically gifted herself, gets herself and others out of several binds using her knowledge of the intricacies of magical formulas. She’s also a perfect example of a character rising to meet the challenges she’s presented with. Her arc is full of personal growth and courage, and while intimidated by her circumstances at times, she’s blessedly free of unnecessary drama or indecision.

Supporting Amalia, we have her mother, La Contessa, her Falcon, Zaira, and the Captain of the Falcon guards, Marcello. All of these relationships were incredibly drawn, speaking to the unique challenges they each represent to Amalia. I was especially pleased with the portrayal of Amalia’s relationship to her mother, La Contessa. So rarely do we get to see truly loving and supportive mother/daughter relationships in fiction. That’s not to say that Amalia and her mother are without conflict, but they handle their disagreements within the larger understanding and comfort of their love for one another.

Zaira, and her relationship with Amalia, is notably free of the overly typical woman on woman competition and sniping. Given the circumstances of their partnership, their relationship is built on a lot of mistrust and misunderstanding, but these circumstances, never the specifics of the other woman, are what drives their conflict and growth. And through these challenges grows a tentative friendship, free of competition and jealousy. Zaira is also a diverse character, expressing interest in both a powerful lord and one of her fellow Falcons, a young woman.

My third props goes to this story’s portrayal of a complicated society and its approach to its magical members. The system that has been created, wherein children with magical abilities have no choice but to join the Falcon system where there powers are tied to the control of a nonmagical Falconer who can, at will, release or bind the Falcon’s abilities, is one filled with problematic issues. But on the other side we see the legitimate dangers that unbound mages present to the city. Mages are incapable of controlling their powers beyond a certain point, getting lost within these forces. In the very first chapter, Zaira, with her fire ability running out of control, could have burnt down the entire city. And throughout the story we learn of other, more tragic, events that have occurred when mages are left free. I very much enjoyed the careful exploration of the many sides of this complicated system. The story touched on free will, choice, and sacrifices made for the good of the public, delving into the many aspects of these topics, without preaching on a correct answer to this complicated problem.

Lastly, the setting and politics. The story takes place in a world that loosely connects to historical Venice. Raverra is also made up canals and waterways, and it was easy to overlay images of Venice onto this new city. The politics of the region were also key to the plot of this story, with a powerful northern realm making inroads into the treaties that hold together many city states that used to operate independently, but now all fall within the oversight of the Empire. The mystery was compelling, and the action fast-moving.

I was incredibly surprised by how much I enjoyed this story. The characters are nuanced, the plot is complicated, and the book doesn’t shy away from confronting large issues that may not have a clear right answer. This is a must for fantasy lovers everywhere! Now I just have to anxiously wait for the sequel!

Rating 9: A wonderful surprise worth adding to your fantasy TBR shelf!

“The Tethered Mage” is included on the Goodreads lists: “Covers With Beautiful Art” and “‘Gender Is No Object’ Second-World Fantasy.”

Find “The Tethered Mage” at your library using WorldCat!