It’s time for another Library Ladies giveaway! And since we’re in the heart of summer, what could be more perfect than giving away a SIGNED hardback copy of “We Were Liars!” Perhaps you’ve heard of it. But it may be better if you haven’t. Read on….. 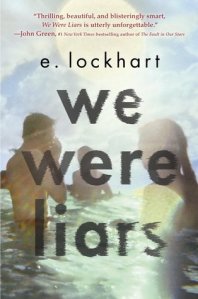 Book: “We Were Liars” by e. lockhart

Book Description: A beautiful and distinguished family.
A private island.
A brilliant, damaged girl; a passionate, political boy.
A group of four friends—the Liars—whose friendship turns destructive.
A revolution. An accident. A secret.
Lies upon lies.
True love.
The truth.

Kate here! So I read “We Were Liars” a few months after it was first published. I knew that it had a lot of buzz surrounding it, and I knew that people were keeping pretty tight lipped as well. I basically swallowed it whole over the course of two days, reluctant to put it down unless I absolutely had to, and I can say that it is amazing, and the perfect summer book to give away.

So why is it the perfect summer book? For one, it’s compulsively readable. Like I said, I couldn’t put it down while I was reading it. It would be a great read for the beach, or an airplane, or just sitting around your house on a super hot day whilst drinking lemonade. And for another, the story and setting really set the mood of summer. It’s about a teenage girl named Cady Sinclair who spends her summers on the family island out east (think Kennedys). She goes with her mother, and spends a lot of time with her cousins. She is closest to cousins Mirren and Johnny, but is also very close to the nephew of Johnny’s mother’s boyfriend, Gat. They’re all so close that they formed a little clique that calls itself The Liars, and Cady and Gat even strike up a summer romance. But during the fifteenth summer, something happened that has left Cady with horrible headaches and few memories. After taking a summer away from the island, she and her mother return for the seventeenth, and she’s reunited with The Liars. But what did happen that fifteenth summer? And why did she forget?

Seriously, this book is a major treat and a lot of fun with its twists and turns. You may not have a private family island to read it on, but the story will nearly whisk you away so that won’t be necessary. Good luck, everyone! You’ll want to get a hold of this book! For a fun bonus, this book has been signed by the author!