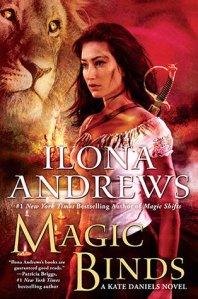 Book Description: Kate and the former Beast Lord Curran Lennart are finally making their relationship official. But there are some steep obstacles standing in the way of their walk to the altar…

Kate’s father, Roland, has kidnapped the demigod Saiman and is slowly bleeding him dry in his never-ending bid for power. A Witch Oracle has predicted that if Kate marries the man she loves, Atlanta will burn and she will lose him forever. And the only person Kate can ask for help is long dead.

The odds are impossible. The future is grim. But Kate Daniels has never been one to play by the rules…

Review: From all accounts, the Kate Daniels series is set to be a ten book run. And this, the 9th, definitely feels like it is the setup for a grand finale, hitting all the right notes by growing the conflict with Roland, raising the psychological stakes for our heroine, and setting up a clear end game for the story as a whole.

The last few books were a bit middling, if I’m honest. As I said in my last review of this series, with Roland on the scene any other “big bad” feels superficial and like a place-holder whose only purpose is to delay the big eventual show-down between Kate and her father. In this book, we’ve arrived at that show-down. Or, at least, to the initial skirmishes that lead up to it.

For a series that started out fairly firmly rooted in the urban fantasy/romance genre, I feel like the story has really come into its own as a family drama. And what a dysfunctional, all-powerful, ego-maniacal family it is! While Curran still plays his role, his and Kate’s relationship has felt steady and well-defined for some time now. And I really appreciate that after the one stumble with relationship shenanigans a few books ago, Andrews hasn’t felt the need to fiddle with this aspect much. Instead, the focus has shifted to Kate’s growing understanding and relationship (?) with her remaining family, in whatever form they may now be.

Kate’s aunt, the “City Eater,” who was killed off a few books ago makes a refreshing re-appearance. That character was brilliant the first time around, both as a legitimately threatening enemy for Kate, but almost more importantly as another bridge into Kate’s family history. Here, this secondary role is even more strongly focused in upon. Kate is feeling the repercussions of her claim on Atlanta, an action that has triggered a well of power and family ambition. Not only do we get Kate’s aunt back with all of her amazing snark, but we even get to meet whatever remains of Kate’s grandma, a powerful being whom Roland has trapped to serve as an energy source to power his massive prison. There’s a lot of focus on the extensive history of Kate’s family with some beautiful looks back to what their world had been like. These flashes, combined with some quiet moments between Roland and Kate, served to much better flesh out Roland’s character and motivations.

Roland himself was great as always. Here we really begin to see the pay-off of taking this long (several books worth of time) to fully flesh out a villain. Roland is so many things all at once: loving father, murdering sociopath, sympathetic hero, misguided maniac. The reader both despises him, but also understands him. With Kate herself struggling with the “Dark Side,” for lack of a better word, it is easy to see Roland’s own fall from hero to villain. His relationship with Kate is so tragic, and yet Andrews saves the book from melancholy with trademark wit. At one point Roland is both threatening to end Kate while also being offended on her behalf about the “shameful lack of feasting” that is planned for her wedding. It’s lovely.

There are few short mini-adventures in this story, and those were the weaker points for me. They were fun enough and we run into a few interesting new creatures (a spunky pegasus is a high point), but given the added depth that we were seeing in the other parts of the book, these adventures also felt a bit too simplistic.

My only other quibble was with the very end of the story, and it was an event that had been literally prophesied from the very beginning of the book, if not the book before even. And really, this quibble is only a personal choice as *spoiler warning* not typically being a fan of pregnancy storylines in fantasy is purely on me.

All in all, I very much enjoyed this book. It actually might be one of my favorites in the series. The stakes are higher, the personal conflict is greater, the backstory is richer, and the characters have all come into their own.

“Magic Binds” is included in these Goodreads lists: “Vamp’s, Were’s, Sorcerer’s/Witches & Elves “  and “Girl with a Sword and an Animal Friend.”