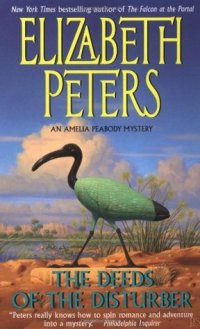 Book: “Deeds of the Disturber” by Elizabeth Peters

Book Description: Can fear kill? There are those who believe so but Amelia Peabody is skeptical. A respected Egyptologist and amateur sleuth, Amelia has foiled felonious schemes from Victoria’s England to the Middle East. And she doubts that it was a Nineteenth-Dynasty mummy’s curse that caused the death of a night watchman in the British Museum. The corpse was found sprawled in the mummy’s shadow, a look of terror frozen on the guard’s face. What or who killed the unfortunate man is a mystery that seems too intriguingly delicious for Amelia to pass up, especially now that she, her dashing archaeologist husband, Emerson, and their precocious son, Ramses, are back on Britain’s shores. But a contemporary curse can be as lethal as one centuries old and the foggy London thoroughfares can be as treacherous as the narrow, twisting alleyways of Cairo after dark when a perpetrator of evil deeds sets his murderous sights on his relentless pursuer… Amelia Peabody!

Review: In this, the fifth book in the series, we step away from our tried and true formula and experience a few completely new settings and approaches, to varying levels of success. Obviously, there’s no way for any book in this series to get a failing grade when you have Amelia Peabody as your narrator, but there were also a few storylines that weren’t favorites of mine.

First off, it’s clear that this is going to be a completely different type of mystery when the book opens with Amelia, Emerson, and Ramses returning to London after their most recent adventure. I was both excited to have a change-up in setting, but also a bit worried about how well some aspects of the series would hold up under the stifling conventionalities of British society. I guess I shouldn’t have worried too much as Amelia has never been one to let trifling little things like “propriety” or “niceties” hold her back from doing what she wants!

So, of course, we start off with a murder, a mystery, and a general unwillingness by Emerson and eagerness by Amelia to become involved. I feel like there is a bit of a pattern to one of the challenges of this series. Of course, to be a mystery, you must have a good number of suspects, which means introducing a whole new cast of character into each book. And, for some reason, this is now the second book in the series where I just couldn’t keep some of the suspects straight. It was just a lot of British noblemen with different relationships to each other, to the museum, and to the Amelia/Emerson family. I actually had to flip back and forth a few times to try and remind myself. There’s a failing somewhere in here, but I’m not sure if it’s just on me or whether more could have been done to really fix each character in the minds of readers and serve as reminders when they show up the next time. All in all, however, I did really enjoy the primary mystery in this novel, and by the end (once I had the cast mostly figured out) the story came together in a very unexpected, but fun/wacky way that is typical to the series as a whole. I also very much enjoyed Amelia’s exploits in dress-up in this book and her ventures out and about in London sans Emerson.

However, there were a few plot lines that I wasn’t a huge fan of. First off, Ramses needed something to do for large portions of this book, and sadly, that something came in the form of two cousins. While there were humorous bits with these two (particularly the girl and her obsession with sweets and theatrics), I wasn’t enthralled overall. I’ve bought in on the one child character, but these two were clearly just foils for Ramses, and I wasn’t very interested in the resolution of his conflict with them (or surprised by the real story behind their antics).

The second plot line…I have really mixed feelings about. I do appreciate the fact that Peters decided to throw a bit of a wrench into Emerson’s and Amelia’s relationship, as it can come of as too perfect at times, especially in this, the fifth book. However, it was hard to read about it when the reader knows that there has to be misunderstandings and some explanation behind everything and things could just be resolved in characters would just sit down and talk about it. So, while I guess it is realistic that they might behave the way they did, it was frustrating to read about, particularly with regards to Emerson. There were a few points where I feel like he was even a bit out of character with how mum he was on his involvement in the situation. He’s been presented as a very frank character, and I wasn’t completely sold on the way he chose to handle things. Or, maybe, I just bought in too fully to Amelia’s perspective on the whole thing!

Those two qualms aside, I did very much enjoy this next book in the series. Turns out that you can still have a fun Egypt-related mystery taking place in the heart of London! I wouldn’t want this to be too much of a trend, however, since I do miss the culture class and history that comes with the usual setting. But as the next book is titled “The Last Camel Died at Noon,” I feel fairly confident that we’ll be back on track soon!

“Deeds of the Disturber” is included on these Goodreads lists: “Regency and Victorian Mysteries”, and “Mysterious London.”

Find “Deeds of the Disturber” at your library using WorldCat.

Previously Reviewed: “The Crocodile on the Sandbank” and “The Curse of the Pharaohs” and “The Mummy Case” and “Lion in the Valley”

8 thoughts on “Serena’s Review: “Deeds of the Disturber””