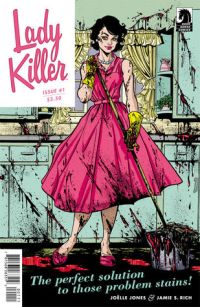 Review: As much as the 1950s was an incredibly toxic time for just about anyone who wasn’t a white Christian straight man, I must say that the cover of “Lady Killer (Vol.1)” drew me in because of the very Susie Homemaker aesthetic. Well, and the bucket of gore. But really, I think that the 1950s setting for Josie Schuller and her assassin life is a perfect time and place because of how restricted women were during this time period. Not only is it the darkest of gallows humor, it’s also a commentary on gender politics during the time period, which I didn’t expect from this book. Josie is a cold hearted assassin working for a secretive group, but she also has a husband and twin daughters at home that she appears to love very much. Her skills at balancing this family life with her job raises questions for her male bosses, Stenholm and Peck, as they think that being a wife and mother is going to ultimately make her unable to do her job, which leads to the main conflict of this series. So essentially, “Lady Killer” takes the idea of women being unable to have it all and shoves it into a 50s motif, and I was living for it.

Josie herself is a very fun and fascinating protagonist. Balancing this double life seems to be something she can do with ease, and it is, in fact, Stenholm (the big boss) and Peck (her handler) that set her up to fail based of their fear that as a woman she won’t be able to do her job. The rampant sexism that was thrown at a top female assassin was both infuriating and yet so damn appropriate for the time period (and also recent times) that I was seething and yet nodding in recognition. So too was it very satisfying to see her turn the tables on them and prove that not only can she do it all, she can do it better than they can. Sometimes it felt like Josie might be a little too good at her job, but hey, if James Bond can be practically perfect in every way, why not Josie Schuller? It was also very refreshing seeing that Josie isn’t like James Bond in the sense that she had no interest in Peck, whose constant advances on her were met with scorn instead of flirtation. I was worried that to be seen as a perfect assassin she would have to also have no actual attachments to her husband and children, but that isn’t the case. Jones opted to give her a more complex value system than one could have, as while she is a murderer for hire, she does love her husband and children with all her heart, and wants to keep them safe, both physically and emotionally.

I also appreciated that there were gross and unfortunate signs of the times that could have easily been ignored. For example, the first time we meet Josie’s daughters they are playing Indian, which was jarring and set my teeth on edge. There is also a moment that Josie follows Peck to a Chinese restaurant, that is clearly overdone and done up to appeal to the white clientele who expect a certain Chinese Fantasy of the female waitresses. This moment was brief and it introduced us to a very cool fellow assassin named Ruby, but you definitely get the sense that Ruby has her own set of nasty expectations thrust upon her being both a woman and Asian.

The drawings in this book are by Jamie S. Rich. They are also something of note, as they are very throw back with their pastels and bright hues, but realistic and gritty when they need to be. In the same frame there can be vibrant 50s retro chic style mixed with extreme violence and bleakness, which offered a fun juxtaposition and just adds to the gallows humor of the series.

“Lady Killer (Vol.1)” was a fun and nasty romp, and it makes me sad that the next trade collection isn’t expected until December of 2017. Seriously. So I guess that just means that I’m going to have to head on down to the local comic book shop and see if they have the newest series in single issue form. I’m not going to wait for Josie Schuller, I want her now.

Rating 8: A fun and gritty series with dark humor and social commentary, “Lady Killer (Vol.1) has introduced another kick ass female comic character that I am obsessed with.