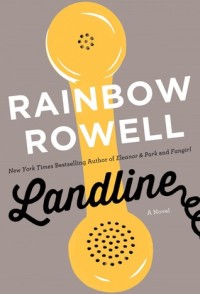 Book Description: Georgie McCool knows her marriage is in trouble; it has been in trouble for a long time. She still loves her husband, Neal, and Neal still loves her, deeply — but that almost seems beside the point now.

Maybe that was always beside the point.

Two days before they’re supposed to visit Neal’s family in Omaha for Christmas, Georgie tells Neal that she can’t go. She’s a TV writer, and something’s come up on her show; she has to stay in Los Angeles. She knows that Neal will be upset with her — Neal is always a little upset with Georgie — but she doesn’t expect him to pack up the kids and go home without her.

When her husband and the kids leave for the airport, Georgie wonders if she’s finally done it. If she’s ruined everything.

That night, Georgie discovers a way to communicate with Neal in the past. It’s not time travel, not exactly, but she feels like she’s been given an opportunity to fix her marriage before it starts…

Is that what she’s supposed to do?

Or would Georgie and Neal be better off if their marriage never happened?

Review: I had read two of Rowell’s young adult novels, “Fangirl” and “Eleanor and Park” and really liked them before coming to this book. I had heard that she had an adult novel floating around, and had it casually on my mental “to read” list, but had never made a real effort to pick it up as it falls out of my usual favorite genres. Last week, however, it happened to pop up as an available audiobook at the library, and that was my sign that now was the time!

I went into this story not knowing much about it. In fact, I had even less than the book description given above, since I was really only checking it out on the strength of Rowell’s other books and the general knowledge that this was about a married couple. That’s about it. So, it was quite a shock when I got to the magical, time-travel phone about 1/4 of the way into the story! A good surprise though.

Georgie is a television writer with her longtime friend and partner, Seth, who has been married for the past 17 years to her college sweetheart, Neal, and has two small girls to complete her family. From the outside, they look like the poster family for a working mom/stay-at-home father lifestyle, with Georgie financing the family, and Neal caring for the two daughters. However, after years of struggles balancing her work/home life, Neal and Georgie’s marriage is coming to a crisis state. Enter time travel, magical phone. A connection for Georgie back to the Neal she knew in college when they were going through a similar rough patch in their relationship.

So, just from that description, this book was quite a step out from my typical reading habits. Magical phones aside (which largely, it really is, as it functions as a plot device and not a lot more),  this book was mostly about the relationship between Georgie and Neal, how they got to where they are now and discovering whether they have a future. It’s a romantic, non-romance book, I guess, featuring two lead characters who are anything but typical romantic leads.

I really enjoyed this book. It perfectly balanced the emotional challenges of a long term relationship without vilifying either of the main characters. I’ve read a few other reviews where Georgie came under strong fire as a narrator, but I felt that her struggles, her realization of poor choices and her own failings was the whole point of the story. She is not written to be an unlikable character, just an honest, flawed human being. Being frustrated with her for these traits misses the journey of the story itself. Neal, too, is not written as a perfect partner, and while Georgie is our primary focal point, one can see the role he plays in their relationship fairly clearly.

I also really enjoyed the role that Georgie’s best friend and writing partner, Seth, plays in the story. I had quite a few concerns when he showed up initially, wondering whether we were heading into love triangle territory, but I should have had faith! If there is one thing that Rowell has proven with her previous books, it’s that she knows how to write honest relationships. And, at their core, I don’t believe love triangles can reflect any honesty about human relationships. It’s just not the way people truly form relationships and attachments. Seth’s role in Georgie’s life is refreshing and integral. He has played a role in the weakening bonds between Georgie and Neal, but not due to any romantic entanglements.

I also really enjoyed Georgie’s interactions with the rest of her family, both her young daughters as well as with her mother, step father, and much-younger sister. I’m going to repeat the word “refreshing” here for how much I appreciated this focus on the other people and relationships that make up Georgie’s life. She is not only defined by the primary romantic relationship in her life, but it is clear that the influence and love that she relies on from these other members is paramount in her life. I always enjoy reading about sisters, especially, and Georgie’s mother was a great character, too.

I sped through this audiobook! Usually I just listen to my audiobooks during my commute and call it good, but I found myself listening to this one as I cleaned my house and even before bed. The reader was very good, and I felt the story itself was very engaging. If you enjoy contemporary novels, with a good dash of humor and an honest look at the challenges and joys of married life, I highly recommend “Landline.”

Rating 8: Very good, especially the deeper look into all the many relationships that make up the central character’s life.

“Landline” is included in these Goodreads lists: “Chick Lit for the Beach” and “Married Couples – NA/Contemporary Romance.”