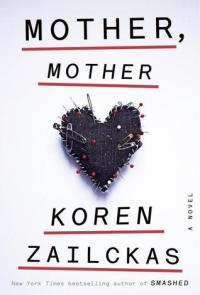 Book Description: Josephine Hurst has her family under control. With two beautiful daughters, a brilliantly intelligent son, a tech-guru of a husband and a historical landmark home, her life is picture perfect. She has everything she wants; all she has to do is keep it that way. But living in this matriarch’s determinedly cheerful, yet subtly controlling domain hasn’t been easy for her family, and when her oldest daughter, Rose, runs off with a mysterious boyfriend, Josephine tightens her grip, gradually turning her flawless home into a darker sort of prison.

Resentful of her sister’s newfound freedom, Violet turns to eastern philosophy, hallucinogenic drugs, and extreme fasting, eventually landing herself in the psych ward. Meanwhile, her brother Will shrinks further into a world of self-doubt. Recently diagnosed with Aspergers and epilepsy, he’s separated from the other kids around town and is homeschooled to ensure his safety. Their father, Douglas, finds resolve in the bottom of the bottle—an addict craving his own chance to escape. Josephine struggles to maintain the family’s impeccable façade, but when a violent incident leads to a visit from child protective services, the truth about the Hursts might finally be revealed.

Review: It is times like these that I thank the heavens that my mother is a wonderful, funny, awesome person who raised me well with a lot of encouragement and love. Sure, my teenage years, like most teenage years, were trying for both of us, but she and I have a very good relationship now, and I know that I am lucky for that. Because there are some people who have mothers like Josephine Hurst, and that scares the bejesus out of me. Josephine Hurst is one of the most twisted villains I have encountered in fiction this year, and like the other villains that have shook me to the core it’s because of her plausibility. She is the classic narcissist parent, who coddles and smothers and brainwashes one child (the neurotic and eager to please son Will), and torments the other (the tortured and lost Violet). I had gone into this thinking that it was going to be something kind of soapy and cartoony like either Kathleen Turner in “Serial Mom” or Marcia Cross on “Desperate Housewives”, but then when it was a really upsetting and scary book about the dangers of narcissistic parenting I was a bit taken aback. Though I suppose I should have expected something along those lines from the woman whose memoir, “Smashed: The Story of a Drunken Girlhood”, was about her tumultuous teenage years on booze. Still, how I hoped for a campy Bree Van de Kamp-Hodge revisit.

I will say this much, this book was super upsetting and very terrifying to me because of how relentlessly evil Josephine was, and not in a fun way. Watching her manipulate her children and husband and wage psychological warfare against them was just hard to read. It’s told from two perspectives, that of Will, the doted on and pampered child, and that of Violet, the black sheep who Josephine psychologically abuses. The overarching mystery in this book is a pretty clever one, in that you don’t realize that it’s a mystery until about half way through, and that is of the oldest child, Rose. Rose ran away from the family shortly before the events started, and Zailckas does a very good job of slowly revealing why things may not be as they seem in not just this situation, but in many other situations in this book. We get the perspective of Violet, who resents her sister for leaving, and Will, who has been convinced that his oldest sister is basically evil, and I wanted to smack and shake both of them and protect them from this horrible woman who is raising them. I’ve seen and heard about narcissistic parents in the lives of my friends and acquaintances and family, and Josephine is written very, very convincingly. Even though I wanted to shake both Will and Violet for different reasons, I not once said to myself ‘well that just wouldn’t happen’, because Josephine was incredibly real. I definitely enjoyed the Violet sections more, but that may have been because the Will sections were a bit too disturbing to me. Will is the child who is loved and praised and coddled, but you also see just how far gone he is, and how screwed he is going to be because of his connection to his horrible and abusive mother. That said, I also think that the Violet parts showed a more well thought out character, as Violet, though she rebels against her mother with her fascination with Eastern religion and philosophy, is also completely controlled and dominated by her. Violet had the strongest voice of the three children, and I really felt for her and invested in her.

However, I kind of guessed a couple of the big twists pretty early on in the story, and I don’t know if it was because I read too much thriller fiction or because Zailckas didn’t parse out the clues in a very tricky way. I had a harder time with some of the red herrings that were thrown in, as they were only there to distract but then had no explanation or payoff. I also wish that we had a little more dichotomy between Josephine and Beryl, the mother of Violet’s friend Imogene and the positive female influence in her life. We got to see Beryl a little bit, but I wanted more juxtaposition between them. I also felt that Beryl was almost too two dimensional in her portrayal, both a compassionate maternal angel and a literal martyr, as she is suffering from terminal cancer. I think that had we seen more of her and had she had more depth it would have felt more sincere. And without giving away any spoilers, I wished for more closure than we got. I know that life doesn’t always have closure, and I know that rarely do awful people really get what they deserve. But sometimes I am desperate for it, and when it doesn’t happen the way I want it to I have a harder time accepting it.

“Mother, Mother” is a solid thriller mystery and most of the characters are well thought out. But I warn you, it is very upsetting, and it tends to have a bit more emotional baggage than it can carry. Koren Zailckas captures narcissistic personality disorder very well, and should you dare read this, be ready to feel all the ick.

Rating 7: While some of the parts are hard to read and some of the plot twists and diversions are unnecessary, “Mother, Mother” paints a haunting portrait of a horribly abusive mother and her suffering children.