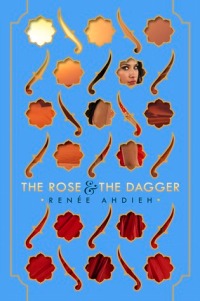 Book: “The Rose and the Dagger” by Renee Andieh

Book Description: In a land on the brink of war, Shahrzad is forced from the arms of her beloved husband, the Caliph of Khorasan. She once thought Khalid a monster—a merciless killer of wives, responsible for immeasurable heartache and pain—but as she unraveled his secrets, she found instead an extraordinary man and a love she could not deny. Still, a curse threatens to keep Shazi and Khalid apart forever.

Now she’s reunited with her family, who have found refuge in the desert, where a deadly force is gathering against Khalid—a force set on destroying his empire and commanded by Shazi’s spurned childhood sweetheart. Trapped between loyalties to those she loves, the only thing Shazi can do is act. Using the burgeoning magic within her as a guide, she strikes out on her own to end both this terrible curse and the brewing war once and for all. But to do it, she must evade enemies of her own to stay alive.

Review: I picked up this book right on the heels of finishing the first, and while I enjoyed the first one for the most part, I was almost more intrigued by this sequel because it wouldn’t be that. The “retelling” of “A Thousand and One Nights” had been thoroughly wrapped up in the first book, so endless opportunities were spread before this one. And the cliffhanger left some good room for growth. For the most part, I think this succeeds, though it does get bogged down by the trappings of the first book.

Originality played highly in this book’s favor. Freed from the original trappings of serving as a retelling, the author had room to take world-building and character growth in her own directions, and for me, this really succeeded. While before the story was trapped largely within the confines of the palace in Rey, here Shazi has been released on the greater world and new and exciting destinations come with it. And alongside these fantastical new settings, adventures followed.

In fact, I would classify this book as an adventure story, first and foremost. Its predecessor was largely a romance, and the hints of a love triangle made me nervous for this book’s direction. Gladly, these worries were unnecessary. The romance served as motivation and fuel to the fire of Shazi’s attempts to end the curse, but it is a matured romance that is steady and sure of itself. No needless wavering or second-guessing.

I also really enjoyed the nods to Aladdin in this book. The scenes with the magic carpet were beautiful and obviously made me want one for myself. And the inclusion of a genie-like character was inspired, most especially given the well-rounded characterization that is applied in the relatively short amount of page time that is devoted to the character.

There were a few downsides, however. While I enjoyed the increased time that was spent from Shazi’s sister’s perspective, there was also a rushed romance here that felt unnecessary. Irsa’s journey was one of self-discovery. As a character who had spent a life time comparing herself unfavorably to her fire-y and strong sister, Irsa’s path to self-acceptance and appreciation for her own unique talents was one that I believe would speak to many readers. No need to add in the distraction of a burgeoning love. It felt like this was inserted purely to compensate for the fact that Shazi and Khalid’s own love story was past the “discovery” phase, and the author worried that more romance was needed. Unfortunately, I feel that this addition was a disservice to both Shazi’s and Irsa’s story. It was refreshing to read a series where the primary romance progressed in a normal manner, from new love to steady love, and the addition of a love interest to Irsa’s own tale distracted from the more interesting story of personal growth.

The other small niggle I had with this book was the inclusion of stories-within-stories. I listed this as part of the reason I enjoyed the first book, and given the fact that its a retelling of “A Thousand and One Nights,” it plays a large and natural role within the narrative. That’s all well and good. Unfortunately, this book isn’t that. The adventure and more action-packed nature of the story doesn’t serve as a natural vehicle for the insertion of shorter tales. While I understand that the author was attempting to highlight the importance of story-telling and reinforce what made Shazi so special to begin with, the addition of a few of these tales were more distracting than anything else. I wish the author had felt more comfortable letting her previous work stand for itself and allowed this book to be its own thing as well.

Overall, however, this book was a solid conclusion to the series. Characterization, over all plot progression, and the new additions to the story all served to fully round out the duology. For fans of retellings, or readers looking for a fantasy story set in a non-European setting, I highly recommend this book and series!

Rating 6: A solid conclusion, if a little undermined by trying to be too similar to the first book.

“The Rose and the Dagger” is included on these Goodreads lists: “#ReadPOC: List of Speculative Fiction by Authors of Color” and “Scheherazade.”

Find “The Rose and the Dagger” at your library using WorldCat!

2 thoughts on “Serena’s Review: “The Rose and the Dagger””