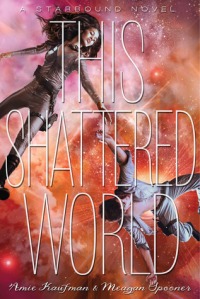 Book: “This Shattered World” by Amie Kaufman and Meagan Spooner

Where Did I Get this Book: audio book from the library!

Book Description from Goodreads: Jubilee Chase and Flynn Cormac should never have met.

Lee is captain of the forces sent to Avon to crush the terraformed planet’s rebellious colonists, but she has her own reasons for hating the insurgents.

Rebellion is in Flynn’s blood. Terraforming corporations make their fortune by recruiting colonists to make the inhospitable planets livable, with the promise of a better life for their children. But they never fulfilled their promise on Avon, and decades later, Flynn is leading the rebellion.

Desperate for any advantage in a bloody and unrelentingly war, Flynn does the only thing that makes sense when he and Lee cross paths: he returns to base with her as prisoner. But as his fellow rebels prepare to execute this tough-talking girl with nerves of steel, Flynn makes another choice that will change him forever. He and Lee escape the rebel base together, caught between two sides of a senseless war.

Review: After reading and liking “These Broken Stars,” the first book in the “Starbound” trilogy, I was excited to jump right into the sequel. As I said in that review, I was even more intrigued by this book (and this series) by the fact that it was being written as companion novels, each featuring new characters, while spinning out a larger mystery that connects them all. When most YA series have recently followed a very predictable path, this was a creative take and a way to “have your cake and eat it, too” as an author. Sustainable series that will build and maintain a reading followership? Check. Get to write exciting, new characters and storylines? Check. Garner new readers with each book by not requiring knowledge of a previous story to engage with the current one? Check. So, in theory, “This Shattered World” was a brilliant concept. In reality, it was a swing and a miss for me.

Starting with the things I liked. Strengths from the previous novel were still present here: strong grounding in science fiction, not shying away from the realities and horror of the story’s premises, and the ability to draw characters who are both flawed and sympathetic and whose journey to mutual understanding is believable and compelling. These are no easy marks to meet, and I can’t emphasize enough how impressed I have been by the authors’ ability to balance alternating character chapters in a way that makes each perspective relatable and interesting in both of these stories. I personally found Jubilee’s voice more compelling, but this is likely due to my own personal preference for her character type as opposed to the more quiet and introspective Flynn.

Further, I was impressed with the way that the previous book’s main characters were tied into this story. The larger conflict dealing with Lilac’s father, his company, LaRoux Industries, and the experiments they have been undertaking on a mysterious alien life form were neatly woven in to this book. The unique conflict and peril of the story, the growing rebellion between the military and rebel leaders, were balanced nicely with this larger plot point. And while Lilac and Tarver are not present for much of the story, when they do make an appearance, it doesn’t feel forced or contrived. This story neatly builds upon the first one and does a good job laying down more groundwork and pushing the narrative towards the inevitable confrontation that will take place in the final book in the trilogy.

Now, sadly, for the negatives. First off, the writing in this book, overall, felt weaker than the last. The limited vocabulary was noticeable to a point of distraction. At one point, the word “shattered” was used 4 times within 2 pages. Hearts shattering. Sound shattering. Thoughts shattering. And it was only later that day when I remembered that that word was also in the title! I wouldn’t necessarily say that this is a marked difference from the first book, but instances like this did happen often enough to make me notice it in this story. Whether that comes down to the fact that there was an actual drop in writing quality in this book, or instead an indicator that I was not as thoroughly invested in this story enough that I was noticing things like this, I don’t know. Honestly, neither explanation is very good.

For some reason, beyond the alternating character chapters, the authors chose to include dream sequences from Jubilee’s perspective between each chapter. In a book as long as this is and with chapters as short as they were, that’s a lot, A LOT, of dream sequences. Way too many to be of any actual use to the story. A few of them may have contributed some background knowledge into Jubilee’s past, but I’m not convinced that this method was the best way to go about this. We learned Flynn’s past fine without resorting to 20+ dream sequences spread out through the entire book. And by the time the story gets to the final act, these dream sequences were not only failing to add to the story, but actively distracting from it and inserting a jarring tonal change between action-packed sequences. Further, there were more writing quality issues with the decision to refer to Jubilee as “the girl” throughout each dream sequence. “The girl hid under the table. But the girl could not see anything.” This writing technique is only rarely successful, from my experience, and there needs to be a good reason to choose to do it. That wasn’t the case here.

This also ties in neatly to my last critique. Typically I don’t have a lot to say about the audiobook version of a book I’ve read. Maybe I’ve just been lucky so far and had good experiences. This, however, was decidedly not. The writing challenges were only further highlighted, I feel, when listening to the story. And some of the creative decisions were very poor. For instance, they decided to have three narrators, one for Jubilee, one for Flynn, and another for the dream sequences portion.

The direction for the dream sequences was absolutely atrocious, and I don’t say that lightly. For some reason, they decided to include this whispery murmuring and wind sound affect in the background for each bit. And the voice actor read the entire thing in a very dreamy, whispered voice. It was almost impossible to take it seriously. The combination of these affects, and the dramatic reading voice,  alongside the very simplistic writing style and the whole “the girl” narrative style, was severely off putting. It was taking itself way too seriously and ultimately made a joke of the whole thing. This is very unfortunate. I feel like I would have disliked the dream sequences even if I had simply read the book for the reasons I highlighted earlier, but the audio book version almost made them unbearable.

And sadly, the voice actor who read for Flynn was also not a favorite of mine. His tonal inflection was very bland and he didn’t vary his voice at all between characters which made several portions of the story very difficult to follow. The woman who narrated Jubilee, however, did a very good job. It is just too bad that having only one successful voice actor out of three makes a serious impact on the audio book’s success overall.

I would have rated the story alone as a 6. The strengths from the previous book were still present, however this book suffered from slightly weaker characters, a slightly weaker plot, and even perhaps slightly weaker writing. However, when the audio book is as bad as this one, I have to detract another point. It just goes to show how important it is to properly cast and direct an audio book. It has a huge effect on a story, making small flaws that much more noticeable and potentially adding points of distraction and distaste to an otherwise adequate story.

Rating 5: The story was ok, but the audio book was not.

Find “This Shattered World” at your library using Worldcat!

Previous Review of “These Broken Stars.”