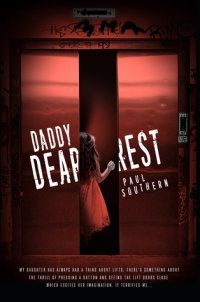 Publishing Info: Self Published. Available on Amazon and Smashwords, June 2016.

Where Did I Get This Book: I received a free ARC edition of this book from the author in exchange for an honest review.

Book Description from Goodreads: An estranged father’s weekend with his beloved five-year-old daughter turns into a nightmare when she gets into the lift of a city centre tower block and goes down without him. She vanishes without a trace. It sets off a race against time, and a nationwide manhunt, to find her. As the police investigation closes in, suspicion falls on those closest to her – with devastating consequences. Daddy Dearest is a terrifying story of love, obsession and psychological meltdown.

Review: I thought I had this book all figured out when I read the description. What is it that Han Solo says? “Don’t get cocky”? I got cocky. I never should have assumed that I knew everything going into this book, because it ended up making me feel very sheepish indeed. I went in with preconceived notions, and “Daddy Dearest” proved me wrong. I like being proved wrong, folks, especially if it works out in my favor, ultimately. I think that part of it is that I’ve read so many thrillers as of late that have big crazy outlandish twists, I am always on the lookout for curves and swerves, and while “Daddy Dearest” does have some twists and turns, I didn’t guess any of them. So BRA-VO, Paul Southern.

I feel that while I would like to keep some of the major plot points tucked away, there are themes that I want to address in this review that could be seen as spoiler-y. So fair warning.

At it’s heart, “Daddy Dearest” is a character study of a man who is grappling with a lot of stress and problems in his personal life. Our unnamed narrator and his unnamed daughter have a pretty decent relationship, one that seemed fairly realistic given the circumstances. He’s divorced from her mother, she only seems him every once in awhile, and he is clearly quite terrified of losing her. While this manifests in a fear of her getting caught in an elevator (or lift in the book, as it takes place in the U.K.), the fear is far broader than that. When she disappears behind those doors, it makes all of his fears a reality, as it seems that she has disappeared from his life without any way to get her back. Our Narrator is an interesting conundrum in and of himself, as while he loves his (also unnamed) daughter very much it becomes clear from early on that he does not like, or at least respect, women as a whole. I honestly had a hard time with some of the ways that he would describe women in this book, and how he would interact with them as well. It took some time to peel back the layers of our narrator, and the more we peeled back the more disturbing he became. At first, when I went in thinking that Our Narrator was going to be a heroic type trying to save his daughter from some unknown threat, I thought that the writing was very sexist and was having a hard time with it. As I kept going, however, it slowly became apparent that all was not as it seemed, and I have to say that it was achieved in a clever and satisfying way. I can’t say that I liked Our Narrator, but I was very invested in how things shook out for him and his missing daughter.

Sometimes when I was reading it I would get tripped up over some of the phrasing. While the story itself was pretty well done and kept me interested, there were times that the writing felt a little choppy or awkward. There were a number of times that I would get hung up on a sentence because of the language that was chosen to convey it. It doesn’t break the book, but it did take me out of the story whenever it did happen. I usually saw what their effect was supposed to be, but mostly they just didn’t quite bring me to where they were meant to. There were also a couple of tangential moves in the story that were a little bit confusing for me, and even after trying to go back and discern what had happened, I was still left scratching my head. I also did, ultimately, have a hard time wrapping my head around the women characters in this book. I know that we were seeing them through the eyes of Our Narrator, who has a lot of contempt for women in general, but I had a hard time understanding the motivations of those who were present, at least when it came to having a relationship with him. This was the most apparent with Our Narrator’s ex-wife. Sure, we know that she got out of the marriage, but I never really understood why she got in it in the first place. I should mention that it’s a first person narrator who is unreliable at best, so this could be me nit picking, but I wanted to see some idea as to why she would have had associated with this man, much less had a child with him!

I was pleasantly surprised by “Daddy Dearest”. I think that if you are a fan of thrillers and can overlook some fumbling writing quirks, this may be one to check out. It definitely left me guessing, which is really what one wants in a book like this.

Rating 6: Though the writing is a bit clunky at times and some of the characters a little flat, the plot is well paced and did keep me guessing. A solid mystery with some good twists.

As of this writing “Daddy Dearest” is not on any lists on Goodreads. However, I think that you will find similar stories on “Popular Unreliable Narrator Books”, and “Popular Missing Persons Books”.

Though “Daddy Dearest” is not available on WorldCat as of this writing, you can find it on Amazon and Smashwords on June 1st.