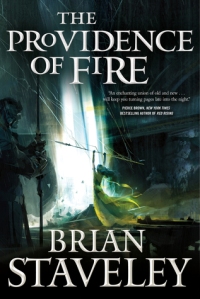 Book: “The Providence of Fire” by Brian Staveley

Book Description from Goodreads: The conspiracy to destroy the ruling family of the Annurian Empire is far from over.

Having learned the identity of her father’s assassin, Adare flees the Dawn Palace in search of allies to challenge the coup against her family. Few trust her, but when she is believed to be touched by Intarra, patron goddess of the empire, the people rally to help her retake the capital city. As armies prepare to clash, the threat of invasion from barbarian hordes compels the rival forces to unite against their common enemy.

Unknown to Adare, her brother Valyn, renegade member of the empire’s most elite fighting force, has allied with the invading nomads. The terrible choices each of them has made may make war between them inevitable.

Between Valyn and Adare is their brother Kaden, rightful heir to the Unhewn Throne, who has infiltrated the Annurian capital with the help of two strange companions. The knowledge they possess of the secret history that shapes these events could save Annur or destroy it.

Spoilers for the first book “The Emperor’s Blades”

Review: The second book in Staveley’s “Chronicle of the Unhewn Throne” series is like one of those scenes that starts zoomed in a on kid playing, and then zooms back and the kid is in large park, and then zooms back and the park is in a huge city, and so on and so forth. What I’m saying is that the world building goes from complex to wait…what now?? But Staveley’s control of his narrative, world, and characters never stumbles under this added mythology. If anything, the strength of this series only grows with the additional challenges and complications thrown in the mix.

What is the most impressive about this series is Staveley’s ability to handle his three main characters. Kaden, Valyn, and Adare have a more equal balance this time, as far as page time goes. Each is traveling such a distinctive path. Kaden’s is a cerebral journey pealing back the mysteries of the Shin, the portal-like doorways of the kenta, and the history between the Csestriam, the gods they sought to kill, and humanity caught within a struggle between power players completely out of their league. Valyn’s journey continues as the most straight forward. He is a man of action, and action itself becomes his motivation. While Kaden and Adare spend much of their time balancing the intricacies of the pieces on the world-sized board, Valyn sets a goal and moves towards it, even if reaching that goal means aligning with the Urghul, the savage enemies of his own Empire. Adare, the politician, is forced to re-evalutate her own role in this crumbling world. Betrayed by her own general, Adare is driven out of her city in desperate attempt to gain allies and a find new foothold to combat the roving Urghul armies heading her direction.

What is so amazing about this balance is also what is so frustrating. Kaden, Adare, and Valyn all are seeing limited parts of the story and reacting in ways that are consistent to their worldviews and preferred operating methods. But these choices and stories conflict, setting the three up against each other with misunderstanding and suspicion. While reading each chapter, I could completely understand and sympathize with each character’s decisions. But then once I switched to the next chapter it became clear that no, this other character had the right idea about things.

As the story progresses, each character made decisions that made me want to shake them. However, I see this as a strength of the story. Staveley’s characters are flawed and limited by the knowledge they have and their own personalities and tendencies that lead them towards one decision or another. It was perhaps more uncomfortable if only because I think many fantasy readers are accustomed to our heroes and heroines quickly evolving into specific tropes. Kaden should be all-wise, calm, and reasoned. Valyn should be completely heroic, using violence in only the most esteemable ways. And Adare should be clever, easily wrapping her foes around her finger and springing elaborate traps. When they fail to behave as we expect, it’s frustrating, uncomfortable, and frankly, awesome.

This book also made a lot of strides to improve upon the last as far as page time and use of its female characters. Adare is given an equal portion of the story; in fact, hers becomes my favorite of the three siblings. And a new character, Gwenna, a member of Valyn’s group of Kestrel fighters, gets her own sprinkling of chapters. This was particularly welcome. As I said, the three siblings become very caught up in the increasingly complicated web that is the Empire, and it was a relief to read chapters from the very straight-forward thinking Gwenna. She was brash, sympathetic, and highly entertaining. So, too, Triste’s role in the story is greatly increased.

And, as I mentioned, the amazing world building cannot be over emphasized. Most epic fantasy relies on a complex historical past for its world. In this book, it becomes more and more clear that this history is not as understood as it was thought to be. Not only that, but history is still unraveling even in the present. The Csestriam, the old gods, the new gods, the mad, power-hungry leaches of centuries past, the Atmani. They all weave in and out of the story in completely unexpected ways. By the end of the book, I was left questioning everything I thought I had understood from the first book.

All told, “The Providence of Fire” only improved on what was an amazing fantasy epic to begin with. The added complexity of the world and the characters left me constantly guessing and re-evaluating my opinions. While the previous book had slow sections, particularly in the beginning with Kaden’s chapters, this story moves at full throttle from beginning to end. “The Emperor’s Blades” laid out the threads of each storyline, and “The Providence of Fire” tangled them all up into such a mess that I have no idea how Staveley is going to wrap this all up. But I do know that I’m looking forward to finding out!

Rating 9: So good! So worried about what’s coming next!

“The Providence of Fire” is included in this Goodreads list: “Must Read Epic Fantasy.”

Find “The Providence of Fire” at your library using WorldCat!

Previous Review of “The Emperor’s Blades”