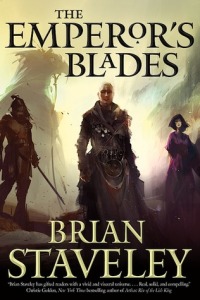 Book Description from Goodreads: The circle is closing. The stakes are high. And old truths will live again . . .

The Emperor has been murdered, leaving the Annurian Empire in turmoil. Now his progeny must bury their grief and prepare to unmask a conspiracy.

His son Valyn, training for the empire’s deadliest fighting force, hears the news an ocean away. He expected a challenge, but after several ‘accidents’ and a dying soldier’s warning, he realizes his life is also in danger. Yet before Valyn can take action, he must survive the mercenaries’ brutal final initiation.

Meanwhile, the Emperor’s daughter, Minister Adare, hunts her father’s murderer in the capital itself. Court politics can be fatal, but she needs justice. And Kaden, heir to an empire, studies in a remote monastery. Here, the Blank God’s disciples teach their harsh ways – which Kaden must master to unlock their ancient powers. When an imperial delegation arrives, he’s learnt enough to perceive evil intent. But will this keep him alive, as long-hidden powers make their move?

Review: It’s just a fact that a lot of high fantasy novel descriptions start sounding all the same over time. If you’ve read a lot of the genre, you immediately recognize staples in these summaries. Ruler’s death. Fight for the throne. Assassins. Mysterious religious/mystical figures. A forgotten past. And this isn’t a gripe about lack of creativity. If you pick up a horror novel or a science fiction novel, there will be a similar case with each. It’s just the nature of genre storytelling. If a reader loves a specific genre, chances are good that what they really love are these specific features common to that type of story. But there is a balancing act to be found between crafting these typical elements to support new and interesting characters and support creative world building and using them as a crutch. More and more, I am wary of the latter. So when I read the description for this book, I kind of sighed and thought, well, here we go! But not only was I wrong; I was so, so wrong. This is Brian Staveley’s first book, but “The Emperor’s Blades” reads like it is already a fantasy classic.

The narrative is split between the lately deceased Emperor’s three children: the youngest and heir to the throne, Kaden, the oldest child and only daughter, Adare, and the middle son, Valyn. So, from the get go, Staveley sets himself up with a challenge. Three perspectives ranging in age, gender, and life experience is no easy task. Often I find myself strongly gravitating towards one narrative and wishing to flip quickly through the rest. And while I feel like I could rank the three stories in an order of preference, I truly did enjoy them all. If anything, a large part of my complaint has to do with unequal distribution. I wanted more from each character!

Specifically, I wanted more from Adare. Sadly, Adare only has a handful of chapters in this book which I felt did her story a disservice. The author is clearly attempting to set up these three storylines as parallel journeys  with each character taking a unique path and answering different questions in the mystery of what happened to their father, the Emperor, and what political mechanisms are in play in the Empire. And Adare is the politician, the daughter who has grown up in the capital city, learning at her father’s knee from birth. But she is not the heir, and after her father’s death, she discovers he has placed her in a political role not typically held by women. Struggling to find allies and unravel the truth behind her father’s cryptic messages, Adare’s story seems central to the larger tale being started with this book. Not only is her position so clearly important, but her practical, no-nonsense approach and savvy political mind were fascinating to read about. A few chapters weren’t enough!

Kaden’s story, on the other hand, is the slow burn in an otherwise fast-moving story. As customary for the heir in the Empire, he has spent the majority of his life being raised far away from the capital by a holy order of monks. This was a fascinating swap in typical fantasy tropes. Kaden spends a large part of his narrative discussing the peaceful, meditative practices that he has spent the last several years learning. Not only was I (a fantasy reader used to hearing all about a typical princelings learning fighting and politics in the middle of court drama) confused by Kaden’s segregation from his family and kingdom, but Kaden himself struggled to understand the value of his tutelage. This storyline was initially a bit slow for me. Kaden is the most cut off from the mayhem that comes from his father’s death, and as a character, he is drawn as a thoughtful, careful person. But while it might have taken a bit for me to become fully invested in his story, there was a big pay off in the end, and I am excited to see where Kaden goes next.

By far, the character with the most page-time and the most to do was the youngest son, Valyn. Valyn, too, has been growing up disconnected from his family and home. From a young age, he’s been training to be a member of the Empire’s most elite fighting force, a group of warriors whose primary skill set revolves around their ability to fly huge falcons. I mean, right there, you know this guy’s going to be fun. Valyn, also, is the first character to begin fully realizing the extent of the problems going on in the Empire following his father’s death which leads to a lot of exciting action. He also is surrounded by the most interesting tertiary characters. The other trainees provide for a very diverse look at the other people living in the Empire. The female members of his group also did a good job of making me feel slightly less disappointed in the small number of chapters that Adare was relegated. Valyn is probably the most typical character, as far as high fantasy goes. This is not necessarily a bad thing either. Like I said, genre readers like what they like. And by sandwiching his story in between Adare and Kaden, two far less typical high fantasy characters, Valyn’s familiarity works as a good balance point.

“The Emperor’s Blades” is the first in a trilogy, and it definitely reads like one. Major cliffhanger warnings! But luckily, the second book came out a while ago, and the third was just published this month. I’ll be diving into those immediately.

Rating 8: Loved it. Wished there was more Adare, but I’ll by jumping right into the sequels, so hopefully I’ll find it there!

Getting on a bit of a soapbox here: I went to look up lists on Goodreads for this book and found not only one, but two lists that were titled something like “Best Fantasy Books for Guys.” There might have been even more, but after the first page included two of these lists, I stopped looking. Here is a pretty generic list that it’s on “Best New Fantasy Novel” and here are two articles worth checking out about gender and reading. Elaine Cunningham briefly discusses epic fantasy and the misconception of them as “boy’s books” here and Caroline Paul writes about how boys should read “girl’s books” here. Both really get to my main point: there is no such thing as “boy’s books” or “girl’s books.” People who like high fantasy will like “The Emperor’s Blades.”

Find “The Emperor’s Blades” at your library using WorldCat!