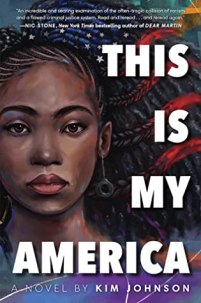 Book: “This Is My America” by Kim Johnson

Book Description: Dear Martin meets Just Mercy in this unflinching yet uplifting YA novel that explores the racist injustices in the American justice system.

Every week, seventeen-year-old Tracy Beaumont writes letters to Innocence X, asking the organization to help her father, an innocent Black man on death row. After seven years, Tracy is running out of time—her dad has only 267 days left. Then the unthinkable happens. The police arrive in the night, and Tracy’s older brother, Jamal, goes from being a bright, promising track star to a “thug” on the run, accused of killing a white girl. Determined to save her brother, Tracy investigates what really happened between Jamal and Angela down at the Pike. But will Tracy and her family survive the uncovering of the skeletons of their Texas town’s racist history that still haunt the present?

Fans of Nic Stone and Jason Reynolds won’t want to miss this provocative and gripping debut.

Review: Thanks to NetGalley for sending me an eARC of this novel!

Though I don’t live right in the city, I live close enough to Minneapolis that I was following the aftermath of the George Floyd murder with a heavy heart and no small amount of anger. Anger towards the MPD, anger towards racists who were saying awful shit, anger at the white supremacists who came into the city to stir up trouble (a bit of fear of that too; given that we’re a Jewish household, for a few nights there we were taking precautions). While I hope that this senseless murder and the protests that came after will start to produce some change when it comes to race in this country, I also know that racism is a deep part of our society and not easily swayed. It was around this time that I got “This Is My America” by Kim Johnson. While I love that more books are being published that address the racism in our country, be it societal or systemic, it’s terrible that things have changed so little that these books continue to be necessary. Circumstances aside, “This Is My America” is another serious contender for one of my favorite reads of the summer.

First and foremost as mentioned above, the themes of this book of racism in the American Justice System and in America itself are pressing and emotional, and I thought that through Tracy’s story Johnson has a more unique perspective. I’ve read a good number of YA books where an unarmed Black person is murdered by the police, which is of course a horrific reality, but in “This Is My America” we look at a different injustice: wrongfully convicted/accused Black men who end up on Death Row. Tracy’s father has been on Death Row for seven years and his date of execution is less than a year away, so for her and her family the hope of his case being revisited is imperative. We see how the trauma has affected her family, from the financial burden laying on their mother, to her younger sister Corinne never knowing her father at home, to Tracy’s obsession affecting her relationships at home and at school. It’s an angle that we don’t get to see as often, that even when ‘justice’ is supposedly served, for a lot of Black men in prison there is no actual justice. Tracy’s desperation is compounded when her brother Jamal is accused of murdering his friend Angela, a white girl who had an on and off again relationship with the sheriff’s son. Jamal didn’t do it, but given that he’s Black he doesn’t trust the police, so he runs. And as Tracy starts to dig into what happened to Angela, she starts to see that it’s not the Black community in their small Texas town that is the threat, but a hidden rot of White Supremacy that has started to rise in the current social conditions. Add into that a corrupt police force and sheriff’s office and you have Tracy trying to find justice on her own. Johnson addresses all of these themes with care and shows the complexity, and it never feels like she’s talking down to her audience. The only time that it feels like it’s being spoon fed or explained is when within the story one would be carefully explaining the ideas, so it fit and didn’t feel out of place. And on top of all that, Johnson included a very substantial Author’s Note at the end that provided a lot of context and resources for the topics in this book.

As if a fabulous overall thematic wasn’t enough, we also get a really well done and well thought out mystery! I wanted to know who killed Angela, just as I wanted to know what actually happened to the couple whose murder sent Tracy’s father to prison. Johnson lays out a lot of clues, a lot of suspects, and a lot of suspenseful moments as Tracy takes the investigation into her own hands, and manages to weave a lot of complexities into the story. I was kept in suspense and on the edge of my seat as more sinister clues were unveiled, and genuinely taken in with each reveal.

One qualm that kept it from a perfect rating: there is a love triangle between Tracy, her best friend Dean, and her childhood friend Quincy (whose father was killed by the police while Tracy’s father was arrested). I don’t really know why there is a love triangle, but there is. I found it a little hard to believe that Tracy would even be entertaining the idea of romance with two different boys when her brother is wanted for murder, her father’s days on death row are dwindling, and there is a potential threat of the Klan being directed towards her family. But at the same time, I know that teenagers can get caught up in hormones maybe? It wasn’t distracting enough to totally throw me off, but it felt out of place.

But really, “This Is My America” is fantastic. It absolutely deserves to  become the next YA sensation, and given how a lot of the themes in this story seem to have come to a head this summer, it feels all the more relevant and all the more pressing. Kim Johnson, I cannot wait to see what you do next!

Rating 9: Incendiary, powerful, and still far too relevant, “This Is My America” peels back systemic racism in the American Legal Justice System, and has a compelling mystery to boot.

“This Is My America” is included on the Goodreads lists “YA Books Similar to THUG”, and “YA Contemporary by Black Authors”.

Find “This Is My America” at your library using WorldCat, or at a local independent bookstore using IndieBound!

2 thoughts on “Kate’s Review: “This Is My America””