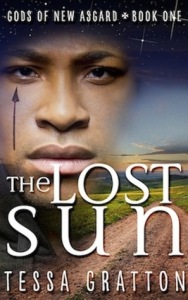 Where Did I Get this Book: audiobook from library!

Book Description: Fans of Neil Gaiman’s “American Gods” and Holly Black’s “The Curse Workers” will embrace this richly drawn, Norse-mythology-infused alternate world: the United States of Asgard. Seventeen-year-old Soren Bearskin is trying to escape the past. His father, a famed warrior, lost himself to the battle-frenzy and killed thirteen innocent people. Soren cannot deny that berserking is in his blood–the fevers, insomnia, and occasional feelings of uncontrollable rage haunt him. So he tries to remain calm and detached from everyone at Sanctus Sigurd’s Academy. But that’s hard to do when a popular, beautiful girl like Astrid Glyn tells Soren she dreams of him. That’s not all Astrid dreams of–the daughter of a renowned prophetess, Astrid is coming into her own inherited abilities.

When Baldur, son of Odin and one of the most popular gods in the country, goes missing, Astrid sees where he is and convinces Soren to join her on a road trip that will take them to find not only a lost god, but also who they are beyond the legacy of their parents and everything they’ve been told they have to be.

Review: This is another one of those mystery books that has been hanging out on my audiobook “to read” list at the library. I have no memory of where I heard of it originally or why I requested it specifically. I mean, looking at the description, it definitely seemed interesting, but there are also a million and one fantasy books out there, so why this one? Maybe I was going through a Thor/Loki moment when I stumbled on it and put it on here? Either way, it was available the other day when I was looking for my next book, so I checked it out! It was definitely an interesting read, but also not quite all I had hoped for.

Soren’s days have been largely devoted to training, both physically in the skills of a warrior, and mentally in the self-control needed to keep the beserking rage he inherited from his father in check. Often this means missing out on social activities with friends and keeping to himself. But when Astrid, the daughter of a famed seer, joins the school, she seeks him and begins to pry into his solitary existence. After a beloved god goes missing, Soren now finds himself on a roadtrip mission with Astrid in the hopes of finding this lost deity and returning him to where he belongs. But that’s only the beginning of a journey that will take them far and uncover much about themselves, their pasts, and their future.

What stood out the most in this book was the creative world-building. What we have here is an alternate version of the United States in which the Norse gods are very real and have a very real influence on every aspect of society: government structure, education, career paths, you name it. I really enjoyed how creative the author was with such a bizarre idea, and how seamless was the end result, considering how strange it is, overall.

This is Soren’s story, so much of the history and current state of the world is told through his point of view. Soren is a good narrator, in this respect, as all of these needed details to flesh out this type of world were delivered in a believable, non-exposition manner, something that is definitely a challenge for a book written in first person. Soren’s own history, that of having a father who gave in to the beserker madness and killed innocent people, is never far from his mind, and from the very beginning we see the limited future Soren sees for himself. He is constantly battling an inner war, and his fear of himself and his abilities stains almost every choice he makes.

The  main problem for me arrived in the form of the other main character, Astrid. Right from the start she struck me as very “manic pixie dream girl” in her behaviors and descriptions. I think the character had potential, but it was really hard to get behind her part of the story when that impression was so strong right off the bat. As the story started moving more, it was easier to be distracted from it. But it was still the sort of thing that popped up throughout and left me having a hard time feeling really too compelled or interested in her part of the story. And then, since so much of Soren’s story becomes tied up with hers, I also lost some interest in him.

Overall, I thought this was a really creative, fun book. My problem most centered around some of the characterization choices that made it hard for me to feel truly invested in the story’s main characters. But if you’re into Norse mythology and want to read a new take on the subject, this might be one worth checking out!

Rating 7: A fun, unique fantasy story set in a re-imagined United States, though the characters left something to be desired.

“The Lost Sun” is on these Goodreads lists: “Best Alternate History Novels and Stories” and “Books with Lost or Found in the Title.”

Find “The Lost Sun” at your library using WorldCat!