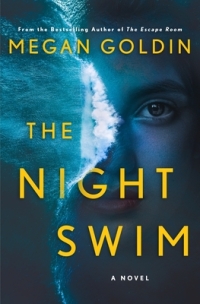 Where Did I Get This Book: I received a print ARC from the publisher.

Book Description: After the first season of her true crime podcast became an overnight sensation and set an innocent man free, Rachel Krall is now a household name―and the last hope for thousands of people seeking justice. But she’s used to being recognized for her voice, not her face. Which makes it all the more unsettling when she finds a note on her car windshield, addressed to her, begging for help.

The small town of Neapolis is being torn apart by a devastating rape trial. The town’s golden boy, a swimmer destined for Olympic greatness, has been accused of raping a high school student, the beloved granddaughter of the police chief. Under pressure to make Season Three a success, Rachel throws herself into interviewing and investigating―but the mysterious letters keep showing up in unexpected places. Someone is following her, and she won’t stop until Rachel finds out what happened to her sister twenty-five years ago. Officially, Jenny Stills tragically drowned, but the letters insists she was murdered―and when Rachel starts asking questions, nobody seems to want to answer. The past and present start to collide as Rachel uncovers startling connections between the two cases that will change the course of the trial and the lives of everyone involved.

Electrifying and propulsive, The Night Swim asks: What is the price of a reputation? Can a small town ever right the wrongs of its past? And what really happened to Jenny?

Review: Thanks to St. Martin’s Press for sending me a print ARC of this novel!

We’re seeing more and more podcast themed books, and as of now I, for one, am still very pleased with this theme in thrillers. If an author does it well, it adds a whole other layer to a story that combines my favorite kinds of books with one of my other favorite forms of entertainment. When St. Martin’s Press sent me “The Night Swim” by Megan Goldin I was elated, as this book had already kind of been on my radar because of the podcast theme. When I did jump on into the narrative, it sucked me right in. And it also made me very, very uncomfortable.

“The Night Swim” has two crimes that our protagonist, Rachel, is following. One is for her podcast, ‘Guilty or Not Guilty’, and it follows a high profile rape case in the small town of Neapolis. A popular and charismatic young man with Olympic dreams is accused of raping a sixteen year old girl, and the town (as well as people all over the world) are split on whether or not he’s guilty. While Rachel is in town, she keeps getting mysterious correspondence from Hannah, a woman who wants Rachel to investigate the death of her older sister Jenny, who was found drowned twenty years before, also in Neapolis. We have multiple narrative styles to tie these two seemingly unrelated cases together. We have Hannah’s letters to Rachel, Rachel’s podcast, and a third person narrative following Rachel’s podcast research and eventual investigation into Jenny’s death. It’s a lot, but Goldin makes it work, blending them all together and carefully revealing how some things, like rape culture and small town politics, never really change even as decades pass. This thriller is really part murder mystery, part courtroom drama, and Goldin balances both aspects meticulously. I was held in suspense regarding what the outcome of the rape trial was going to be, but also as to whether or not Rachel was going to find out what really happened to Jenny. The reveals were all well done and some were genuinely surprising, and while I did piece together a few clues probably earlier than I was supposed to, all of the big reveals were still surprising and enjoyable.

But what made this book stand out from other thrillers I’ve read as of late, and what made it a very difficult read at times, was how frank and unflinching Goldin is when it comes to the themes of rape in this book. While I feel that sometimes other thrillers will have rape as a plot point or as a crime in their pages, going into details or seeing the traumatic fallout aren’t as focused on, rather focusing on the investigation to bring the perpetrator to justice. In “The Night Swim”, Goldin opts to show what it is like for a victim to have to relive her attack while on the stand, and in the spotlight of a high profile trial. After reading Chanel Miller’s “Know My Name”, the memoir of the woman raped by Brock Turner (and whose case is clearly inspiration for this storyline), it was especially jarring and upsetting to read these parts as the victim, Kelly, is forced to tell her story in graphic detail in front of a courtroom full of strangers. But while it was hard, I thought that it was important to show that rape isn’t just a plot point, that it has a horrific fallout, and that the fact that victims have to basically be re-traumatized to get justice, justice that isn’t even guaranteed, is abominable. The descriptions of Kelly’s rape (as well as the assault of Jenny) will definitely be hard to read for many people, so content warnings abound in this book. And while we don’t really get to know much about Kelly outside of her victim status, we DO get to know Jenny very well.

It’s a hard one, but I did really like “The Night Swim”. Steel your heart and get ready for righteous indignation to rush through you, but I think that if you are a thriller reader you should probably pick it up.

Rating 8: A compelling mystery is accompanied by an unflinching look at rape culture and trauma. “The Night Swim” is difficult at times but also feels like it takes on difficult themes that other thrillers may gloss over.

“The Night Swim” is included on the Goodreads lists“Books for Serial Podcast Lovers”, and “Crime, Mystery, and Thrillers 2020”.

Find “The Night Swim” at your library using WorldCat, or a local independent bookstore using IndieBound!