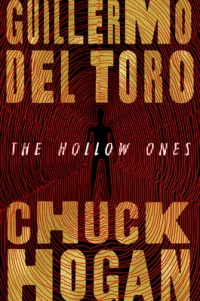 Book: “The Hollow Ones” by Guillermo del Toro and Chuck Hogan

Where Did I Get This Book: I received an ARC from the publisher.

Book Description: A horrific crime that defies ordinary explanation. A rookie FBI agent in dangerous, uncharted territory. An extraordinary hero for the ages. Odessa Hardwicke’s life is derailed when she’s forced to turn her gun on her partner, Walt Leppo, a decorated FBI agent who turns suddenly, inexplicably violent while apprehending a rampaging murderer. The shooting, justified by self-defense, shakes the young FBI agent to her core. Devastated, Odessa is placed on desk leave pending a full investigation.

But what most troubles Odessa isn’t the tragedy itself-it’s the shadowy presence she thought she saw fleeing the deceased agent’s body after his death. Questioning her future with the FBI and her sanity, Hardwicke accepts a low-level assignment to clear out the belongings of a retired agent in the New York office. What she finds there will put her on the trail of a mysterious figure named John Blackwood, a man of enormous means who claims to have been alive for centuries, and who is either an unhinged lunatic, or humanity’s best and only defense against unspeakable evil.

Review: Thank you to Grand Central Publishing for sending me an eARC of this book!

I have loved Guillermo del Toro ever since I saw “Pan’s Labyrinth” back in college. I don’t think that there is one del Toro movie that I haven’t at the very least been entertained by. I try to see all of his movies, and I went to his traveling show of his personal collection of props and artwork when it came to Minneapolis. I also liked his foray into writing, having enjoyed his novel adaptation of “The Shape of Water”, and his vampire dystopia “The Strain” Trilogy that he wrote with Chuck Hogan. So when I had the opportunity to read his and Hogan’s newest collaboration, “The Hollow Ones”, I leapt at the chance. It was a fun surprise too, as I had no idea that they had a new book coming out. I really gotta get more on top of my del Toro stanning I guess.

We move from vampire lore and into demons and possession with “The Hollow Ones”, where del Toro and Hogan give us a mythology and magical system with some influences from a few different sources. You have references to occultist John Dee, references to Voodoo and Hoodoo, and inspirations from Judeo-Christian ideas of possession and Western occultism. Our protagonist Odessa is trying to reconcile the strange and horrible things that she has seen or has been hearing about as mass murders and spree killings start breaking out around New York and New Jersey, namely having to turn her gun on her FBI partner after he turned uncharacteristically violent during a confrontation with a mass murderer. Odessa serves as the audiences’ stand in as she learns about the dark magic at hand, and after she is connected to the mysterious John Blackwood (in my ARC his name was John Silence, but that has changed for the final product). Blackwood has been chasing insidious beings called Hollow Ones for centuries, his immortality a curse tied in with these creatures that jump from host to host and cause as much violence as possible while inside. We not only explore Blackwood and Odessa’s teaming up in the present, but also Blackwood’s partnership with Soloman, a Black FBI agent who had a similar case in the 1960s in the Deep South, and who is now the man to connect Odessa to Blackwood after a Hollow One has started up again. I liked seeing the juxtaposition of two agents having to contend with being Others within their field (Soloman’s arc in particular was a fascinating comment on the Jim Crow South and how being a Black agent put a target on his back), and having to hunt down a disturbing evil with a strange and awkward immortal. It’s just kind of a fun concept, and del Toro and Hogan make the system believable and interesting enough that it’s ripe with potential for scares and shocks. And let me tell you, scare and shock it does, as the Hollow One we are following is INCREDIBLY violent, so much so that I feel a need to put a content warning for a particular scene involving this creature and a baby. Yeah, that wasn’t an easy moment to read for me right now. But it does show that del Toro and Hogan aren’t fucking around with this thing, and also shows just what Odessa and Blackwood are up against, and what Soloman and Blackwood were up against previously.

All that said, “The Hollow Ones” never really moved from ripe potential into a full blown pay off. While it does follow a clear path and story, and while the foundation is there for something really great, I felt that it totally captivated me. I liked Odessa a lot, but Blackwood wasn’t terribly interesting to me even though he should, as a cursed immortal, should be INTERESTING. And on top of all that, it’s very difficult these days to ignore or overlook stories where authors take ideas and concepts from other cultures and don’t do the due diligence to do so appropriately. While I enjoyed the themes and plot aspects of the 1960s storyline, using Voodoo, Hoodoo, and folklore from slave narratives felt very uncomfortable, especially since it was being used in a way that appeared to be ‘demonic’, or at least Othering. I love you, del Toro, but that stuff may not be for you to play with in the stories you tell. Not unless you are VERY careful and respectful with how you do it. And I’m not saying that I think that this was intentionally racist, but it does go to show that some of those past tropes in horror (occultism, the mysterious ‘voodoo’ spells, etc) really do have problematic origins and that you can’t really hold it up through a lens of nostalgia.

This is the start of a series I have heard, and I will probably pick up the next book. As I said, lots of potential in the world building and the characters themselves. But “The Hollow Ones” wasn’t the big bang I was hoping for.

Rating 6: A solid horror thriller with some interesting ideas, “The Hollow Ones” has potential, but doesn’t quite flesh itself out as much as I had hoped, and delved in some culturally appropriative storytelling elements.

“The Hollow Ones” is included on the Goodreads list “Horror to Look Forward To in 2020”.

Find “The Hollow Ones” at your library using WorldCat, or at a local independent bookstore using IndieBound!

One thought on “Kate’s Review: “The Hollow Ones””