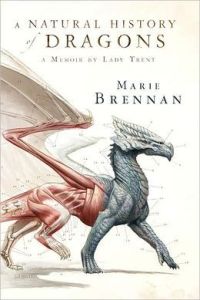 Book Description: All the world, from Scirland to the farthest reaches of Eriga, know Isabella, Lady Trent, to be the world’s preeminent dragon naturalist. She is the remarkable woman who brought the study of dragons out of the misty shadows of myth and misunderstanding into the clear light of modern science. But before she became the illustrious figure we know today, there was a bookish young woman whose passion for learning, natural history, and, yes, dragons defied the stifling conventions of her day.

Here at last, in her own words, is the true story of a pioneering spirit who risked her reputation, her prospects, and her fragile flesh and bone to satisfy her scientific curiosity; of how she sought true love and happiness despite her lamentable eccentricities; and of her thrilling expedition to the perilous mountains of Vystrana, where she made the first of many historic discoveries that would change the world forever.

Review: When I read “Turning Darkness into Light” a year or so ago, I didn’t realize that it was connected to Marie Brennan’s “Lady Trent” series. It was still an enjoyable read, however, and it inspired me to go back and put the original series on my list. Of course, that now makes reading this series, set quite a bit before “Turning Darkness,” into a very different reading experience than it would have been had I been approaching without any prior knowledge. But, overall, I really enjoyed this read!

Before she was the well-known adventurous, Lady Trent, Lady Isabella was just a young woman with an unladylike interest: dragons. But ever determined, she set out to make a life for herself where she could pursue this unlikely passion as far a a lady of her time could hope for. Instead, she got more than she ever wished for. Finding a marriage of true affection with a liberal minded man who eventually even concedes to allowing her to travel on expeditions alongside her. Never did he suspect that she, herself, would be the one to begin making the most extraordinary discoveries of their time!

This book was both what I expected and very different than I expected. On one hand, it’s kind of your staple historical fantasy story featuring an intrepid lady going and doing what no lady has done before. Lady Trent’s voice was very familiar, if a bit less bland than the likes of Amelia Peabody and Veronica Speedwell. But her story was unique enough to stand alone. For one thing, I appreciate the way the story is grounded in the realities of the “time” for a lady such as herself.

Her marriage is not made from wild romance, but from the practical choice of two individuals with unique interests to team up with another who can appreciate their eccentricities. It was a nice change of pace to read about this type of relationship and how their feelings towards each other change and grow over the years as they are put to different, unexpected tests. Her husband doesn’t simply jump onboard with her wanting to travel the world, but very realistically expresses concern that he will be judged for not protecting his wife as a proper husband should. Of course, he quickly sees reason and realizes that her wants and needs are more important than this judgement, but I appreciated that the challenge of living so far outside the norm was addressed.

The story was a bit slower to get started than I may have liked, but once Lady Isabella actually begins her explorations, I really enjoyed it. Even then, the dragons were much more often an idea or passing fear than ever being very present. This, of course, was part of the mystery of them, but it did leave the pacing of the story itself a bit stilted. Here, mostly, is where it was strange that I had read the companion book before this actual series. Many secrets and truths had been taken as common knowledge in that book, but here Lady Trent had yet to make any of these discoveries. It did add a strange, new layer of intrigue for me, personally, as I spent a lot of time trying to guess how all of these smaller clues would lead to the bigger reveals I knew were coming at some point. Even knowing some of the outcomes, I still wasn’t able to put much together beforehand.

I really liked the narrator for this audiobook, and I highly recommend reading the book that way if you like audiobooks at all. The slower pace and, at points, removed feeling one has from the characters themselves did knock this back a few points in my rating. But I plan on continuing the series and hopefully those aspects will pick up in the next one.

Rating 7: A fun historical fantasy story, if a bit plodding at times.

“A Natural History of Dragons” is on these Goodreads lists: “Fantasy of Manners” and “Dragons/Serpents.”

Find “A Natural History of Dragons” at your library using WorldCat!