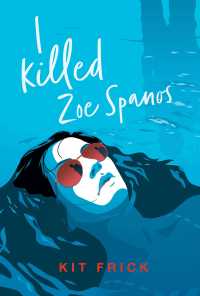 Book Description: This gripping thriller follows two teens whose lives become inextricably linked when one confesses to murder and the other becomes determined to uncover the real truth no matter the cost.

When Anna Cicconi arrives to the small Hamptons village of Herron Mills for a summer nanny gig, she has high hopes for a fresh start. What she finds instead is a community on edge after the disappearance of Zoe Spanos, a local girl who has been missing since New Year’s Eve. Anna bears an eerie resemblance to Zoe, and her mere presence in town stirs up still-raw feelings about the unsolved case. As Anna delves deeper into the mystery, stepping further and further into Zoe’s life, she becomes increasingly convinced that she and Zoe are connected–and that she knows what happened to her.

Two months later, Zoe’s body is found in a nearby lake, and Anna is charged with manslaughter. But Anna’s confession is riddled with holes, and Martina Green, teen host of the Missing Zoe podcast, isn’t satisfied. Did Anna really kill Zoe? And if not, can Martina’s podcast uncover the truth?

Review: Thank you to NetGalley for sending me an eARC of this novel!

In case you were wondering, I’m still on my bullshit when it comes to True Crime podcasts. I haven’t really strayed into new territory outside of the old reliables, but if you have some recommendations, send them my way! More and more we’re seeing podcast themes making their way into mysteries, perhaps in part due to this true crime boom within the listening world. Sometimes it works, other times it doesn’t, but I’m always game to try that kind of book out. So of COURSE “I Killed Zoe Spanos” by Kit Frick caught my eye! It has elements that I greatly enjoy in my thrillers: a luxurious summer setting, a missing girl, secrets that the privileged and the non-privileged alike keep close to their vests. SO, you throw in a podcast angle and I am gonna be there! “I Killed Zoe Spanos” really hooked me in, and it was just the kind of read I could see myself reading on the beach. You know, if I was going to the beach this summer. Which I’m not.

“I Killed Zoe Spanos” follows two distinct perspectives. The first is of Anna Cicconi, a teenager who has come to the Hamptons town of Herron Mills to be a live in babysitter. Herron Mills has a lot of money, a lot of privilege, and is currently haunted by the fact that local girl Zoe Spanos has gone missing that past New Year’s. Eventually Anna confesses to killing Zoe, even though as far as anyone knows there is no connection between the two. The other perspective is that of Martina Green, a local teen who is best friends with Zoe’s sister Aster, and puts out a podcast about the case. Anna’s perspective is mostly in the past and in the first person, while Martina’s is in the present and in the third. Sometimes I have a hard time when there are two kinds of POV styles in a book unless I feel it’s warranted, and with “I Killed Zoe Spanos” I felt like it worked fairly well. It made it so that we could get both the unreliability of Anna’s perspective, given that we have no idea what her connection to Zoe is, even though there is clearly something going on, and also the outside third person lens that Martina has as she is trying to solve the mystery herself. Throw in the transcripts for Martina’s podcast, which adds a whole other layer of potential unreliability (or at least bias), and you have a lot of potential for looking at Zoe’s disappearance and death from all sides. I thought that these three views all complemented each other pretty well, and had enough potential for red herrings within them all to make the mystery interesting. I enjoyed a few of the twists and turns quite a bit, though I will admit that I think that there was a bit of an overreach that came up right at the end. You don’t have to overdo it is all I’m saying.

As far as the characters go, no one really stood out too much in terms of going beyond their templates. Anna is unreliable and mysterious, perhaps threatening but maybe not. Martina is tenacious and truth seeking. I think that there was some interesting potential in some of the side characters, particularly Zoe’s boyfriend Caden, a transracial adoptee whose skin Others him within a very wealthy, and white, insular community. But we didn’t really go looking too deeply into many of these side characters, no matter how interesting they might be.

“I Killed Zoe Spanos” is definitely the kind of book that will take you in this summer! If you are a thriller fan and do find yourself able to safely go to a beach, or sit by a pool, this would be a great read to accompany that kind of excursion!

Rating 7: A fun mystery with some interesting turns, “I Killed Zoe Spanos” is a reliable summer read for thriller fans and fans of true crime podcasts alike.

“I Killed Zoe Spanos” is included on the Goodreads lists “What’s My YA Name Again”, and “Can’t Wait Crime, Mystery, & Thrillers 2020”.

One thought on “Kate’s Review: “I Killed Zoe Spanos””