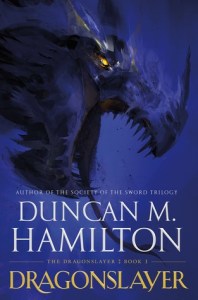 Where Did I Get this Book: NetGalley!

Book Description: Once a member of the King’s personal guard, Guillot dal Villevaurais spends most days drinking and mourning his wife and child. He’s astonished–and wary–when the Prince Bishop orders him to find and destroy a dragon. He and the Prince Bishop have never exactly been friends and Gill left the capitol in disgrace five years ago. So why him? And, more importantly, how is there a dragon to fight when the beasts were hunted to extinction centuries ago by the ancient Chevaliers of the Silver Circle?

On the way to the capitol city, Gill rescues Solène, a young barmaid, who is about to be burned as a witch. He believes her innocent…but she soon proves that she has plenty of raw, untrained power, a problem in this land, where magic is forbidden. Yet the Prince Bishop believes magic will be the key to both destroying the dragon and replacing the young, untried King he pretends to serve with a more pliable figurehead. Between Gill’s rusty swordsmanship and Solène’s unstable magic, what could go wrong?

Review: While, like Kate, I prefer my dragon stories to have the dragons on the good guys’ side, I’ll take what I can get as far as they go. And the title was obvious enough! I also really like this particular cover art illustrator who does a lot of work for books published by Tor, so whenever I see one of his works, I’m often even more interested. But, while this book did deliver on what it promised, it sadly didn’t do much else.

Gill has it fairly well settled that his heroic days are in the past. Content to spend his days drinking and mourning the loss of his family, he’s shocked when he’s call upon by the Prince Bishop to kill a dragon. For one, aren’t dragons gone? And for two, why on earth would the Prince Bishop choose him of all people? But every good hero needs a companion, and Gill finds his in an unexpected place: a witch burning. While Solene has very little control over her powers, it is possible that her abilities could be necessary to dispose of the dragon. And so this odd couple sets out on what could either be a grand adventure or a grand disaster.

This is one of those strange books to review. I know it, and the other two books in the series, were very positively reviewed, and I understand why. The writing is solid. The characterization is interesting and fleshed out. And the adventure is just what is says it is: two oddballs on a dragon-slaying quest. There’s nothing technically wrong with any of these things, and I think I can say with some confidence, judging on all the positive reviews, there is definitely an audience out there who wants this type of straight-forward, non-challenging fantasy adventure. I can even be one of them sometimes, as I know I’ve definitely come across books that haven’t pushed the limit much but still scratched a particular entertainment itch. For me, though, I just wanted…more.

In many ways, we’ve seen Gill and Solene many, many times before. Especially Gill. He’s the drunken, ex-hero who lost his family and lost his vaulted position in society until he gets an unexpected call-to-arms. I get that personal loss is a deep well of emotional motivation and exploration, but man, the drunk dude who loses his wife and kid, sinks into drinking, but then once the adventure starts never gives them a second though? Seen that guy a few too many times. If you’re going to kill off the family and make the loss still poignant enough that your main character is essentially drinking himself to death over it still, I want to see the story address his actual emotional arc for getting through that. Not just have an adventure happen and have it seem like all he really needed was a distraction to put those pesky deaths out of his mind.

Solene, too, was fine enough. But again, we’ve seen the magic user with no control of her powers in a land that hates magic a million times before. The fact that others may want to use her powers for their own ends is no shocker and a theme that has been run to death. Like Gill, she’s a likable character on her own, it’s just that there wasn’t much there to make her stick out from the massive crowd of characters just like her who came before.

I think one of the best and most unique things about this book were the chapters from the antagonist’s perspective, the dragon’s perspective. This was probably one of the few major twists and interesting takes the story had to offer, and I thought the author pulled it off very well. The dragon had a very interesting voice, and hearing that side of the equation is definitely not something I had seen before in this type of book.

Overall, there’s nothing really wrong with this book. I’ve just read this type of swords and staffs fantasy adventure a million times before. The main characters didn’t have enough to make them stand out, and while the adventure was fun enough, it never seemed to dive any deeper than the surface level on any given theme. In many ways, it’s a beach read fantasy story. And that’s not an insult! Sometimes we all just need a solid, expected, non-challenging story to get us through the day. I think I had just hoped for more from this one.

Rating 6: A bit of a let down and not adding much that is new to the genre.

“Dragonslayer” isn’t on many Goodreads lists, but it is on “Fantastical, Bingeable Backlist.”

One thought on “Serena’s Review: “Dragonslayer””