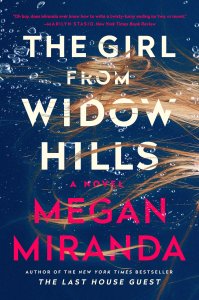 Book: “The Girl from Widow Hills” by Megan Miranda

Book Description: Everyone knows the story of “the girl from Widow Hills.”

Arden Maynor was just a child when she was swept away while sleepwalking during a terrifying rainstorm and went missing for days. Strangers and friends, neighbors and rescue workers, set up search parties and held vigils, praying for her safe return. Against all odds, she was found, alive, clinging to a storm drain. The girl from Widow Hills was a living miracle. Arden’s mother wrote a book. Fame followed. Fans and fan letters, creeps, and stalkers. And every year, the anniversary. It all became too much. As soon as she was old enough, Arden changed her name and disappeared from the public eye.

Now a young woman living hundreds of miles away, Arden goes by Olivia. She’s managed to stay off the radar for the last few years. But with the twentieth anniversary of her rescue approaching, the media will inevitably renew its interest in Arden. Where is she now? Soon Olivia feels like she’s being watched and begins sleepwalking again, like she did long ago, even waking outside her home. Until late one night she jolts awake in her yard. At her feet is the corpse of a man she knows—from her previous life, as Arden Maynor.

And now, the girl from Widow Hills is about to become the center of the story, once again, in this propulsive page-turner from suspense master Megan Miranda.

Review: Thanks to NetGalley for sending me an eARC of this book!

There are some authors out there that I really want to like, but I have very hit or miss interactions with their books. I will usually keep going back unless a book is so poorly done that I decide that I don’t have the reading time to continue giving chance after chance. I thought that Megan Miranda was going to be one of those authors, where I liked one book but nothing else worked for me. After her last book, “The Last Houseguest”, I thought that I was done for good. But something told me that I should give her newest novel “The Girl from Widow Hills” a chance. And am I glad I did. Megan Miranda has missed the chopping block for now, because I think that “The Girl from Widow Hills” is my favorite of her books that I’ve read.

“The Girl from Widow Hills” has a compelling mystery that drives it, a complicated and perhaps unreliable narrator, and a little bit of critiqued nostalgia for human interest journalism, which combined to make a very enjoyable read. Our protagonist is Arden, a woman whose claim to fame was being swept up in a flood when she was six years old and miraculously surviving as a community, and then a nation, watched with bated breath to find out her fate. The trauma of that experience, being trapped for a few days until a man passed by and found her, has followed her the rest of her life, as her mother profited off of the story and the public began to think that she was ungrateful of their support as she tried to live her life. Now living under the name Olivia, I thought that Olivia/Arden’s trauma and need to escape her past was very realistic. It also made for an interesting and perhaps unreliable narration device, as she doesn’t remember much about those days where she was missing. It felt different from unreliable narrations we see in this genre in that the gaps in her story aren’t gaps that she has placed on purpose, but rather the result of being so young at the time, and suffering from PTSD after the fact. The mysteries that she’s trying to solve, mostly why did the man who saved her back then end up dead on her property now, given they have had no connection since, are very compelling and kept me guessing for a lot of the story. I liked following Olivia/Arden, and liked seeing the clues come together. And while it’s true that I did figure a couple things out before the end, and while it’s also true that the reveal at the end felt a little farfetched, just getting there was an enjoyable experience, so I didn’t even mind that it was a bit clunky, reveal wise.

But the thing that I liked the most was the way that Miranda shows the entitlement and ownership that the public can get when it comes to these heartwarming human interest stories. The media and the community focused in on this missing little girl, much like the Baby Jessica story, and rejoiced in her being recovered safely. But then the joy and relief slowly turns poisonous as Arden tries to move on with her life, and people think that she should be more grateful of the donations, well wishes, and care that was sent her way. It’s a very pointed criticism of how people expect to be rewarded for doing good things, and that victims can continue to be victimized when they don’t act or behave in a way that others deem ‘worthy’. That was the aspect of this book that I really, really enjoyed. It felt like the ballsiest thing I’ve seen Miranda put in her books.

“The Girl from Widow Hills” was an addictive thriller, and if you haven’t put it on your summer reading list yet you definitely should! I’ll definitely be taking a look at whatever Megan Miranda has in store next!

Rating 8: A fun and suspenseful thriller with some searing social commentary, and definitely a book that revives my faith in Megan Miranda!

“The Girl from Widow Hills” is included on the Goodreads lists “Mother and Daughter Thrillers”, and “Family Secrets (mystery/suspense/thriller only)”.

Find “The Girl from Widow Hills” at your library using WorldCat, or at a local independent bookstore using IndieBound!

2 thoughts on “Kate’s Review: “The Girl from Widow Hills””