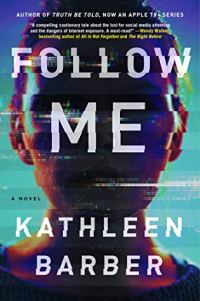 Book Description: Everyone wants new followers…until they follow you home.

Audrey Miller has an enviable new job at the Smithsonian, a body by reformer Pilates, an apartment door with a broken lock, and hundreds of thousands of Instagram followers to bear witness to it all. Having just moved to Washington, DC, Audrey busies herself impressing her new boss, interacting with her online fan base, and staving off a creepy upstairs neighbor with the help of the only two people she knows in town: an ex-boyfriend she can’t stay away from and a sorority sister with a high-powered job and a mysterious past.

But Audrey’s faulty door may be the least of her security concerns. Unbeknownst to her, her move has brought her within striking distance of someone who’s obsessively followed her social media presence for years—from her first WordPress blog to her most recent Instagram Story. No longer content to simply follow her carefully curated life from a distance, he consults the dark web for advice on how to make Audrey his and his alone. In his quest to win her heart, nothing is off-limits—and nothing is private.

Kathleen Barber’s electrifying new thriller will have you scrambling to cover your webcam and digital footprints.

Review: As you all know, I love the book “You” and it’s sequel “Hidden Bodies”. One of the creepiest aspects of those books is that we follow the stalker and creepazoid Joe Goldberg and get to root around in his head when he is obsessing over women, and going to violent lengths to get near them. As much as I LOVE those books, part of me has wondered how they would have been different if we’d been able to get a little more in the heads as his victims as much as we did his. So as I was reading “Follow Me” by Kathleen Barber, I was struck by the fact that that was basically what I was getting: insight into the stalking victim’s thought process and motivations.

“Follow Me” is another thriller novel that will make you want to double check your privacy settings on all of your social media, as the slow cat and mouse game of watching a mysterious stalker hone in on social media influencer Audrey is tense and freaky. Barber switches the perspectives between three distinct voices: ‘Him’, the stalker; Audrey, the ambitious and a little self involved social media influencer; and Cat, Audrey’s best friend from college whom she has reconnected with after moving to D.C. We get insights into each of the characters through these narratives, and while they aren’t always the most reliable, they all give key clues to the overarching mysteries at hand. I thought that all of them had distinct voices, and that Barber did a really good job of parsing out the pertinent clues between them. The pacing of their narratives really kept me interested, and the building suspense held a grip that kept me reeled in. Plus, at the beginning Barber has an author’s note that really lays out and explains some of the extra invasive and stalker-y tricks that some of these creeps will pull, like RAT software and spyware. This stuff is what nightmares are made of.

But what I appreciated most about this book was that it really humanized, but didn’t glamorize or infantilize, our stalking victim Audrey. Too often do we find narratives in the thriller genre in which women are either innocent and naive victims, or conniving bitches and/or whores who somehow deserve what is coming to them. Even “You” sometimes treads towards this, though I think that it ultimately doesn’t fall into this because EVERYONE in that book is horrible so it’s an even playing field (plus, what Joe does to Beck is horrifying). But in “Follow Me”, Audrey is given a lot of grace, even if she’s incredibly flawed. I was both hoping that everything would be okay for her, and also wanting to shake her because of her self involvement and mistreatment of those around her. I do wish that the same grace had been granted to Cat, as while we did learn a lot about of things about her past that explained her strange quirks, she felt a bit more two dimensional than I wanted her to be.

I will say that I thought that there were some hasty plot twists thrown in, and that the end fell apart by the time we got there. There were just some things that felt obvious and slapdash, and had the foundation been laid out a bit better it would have paid off more. But the journey getting to the end was so suspenseful and engaging that I didn’t really care about some of the ill conceived twists and turns.

“Follow Me” was a fun and unsettling read. Definitely pick it up if you want a suspenseful book, but also make sure you have something to cover your computer camera with once you are done with it.

Rating 8: A fast paced and suspenseful thriller that was enjoyable. It kind of fell apart at the end, but the time getting there was far too entertaining to discount.

“Follow Me” is included on the Goodreads lists “Psychological Suspense for 2020 (U.S. Publications Jan-July 2020)”.