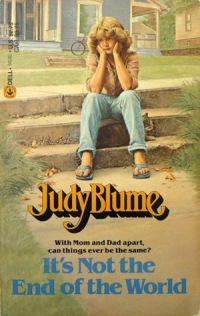 We are part of a group of librarian friends who have had an ongoing bookclub running for the last several years. Each “season” (we’re nerds) we pick a theme and each of us chooses a book within that theme for us all to read. Our current theme is “American Girl Readalikes”, in which we each pick an American Girl book and a book that can be connected to it, however tenuous as it may be.

Book: “It’s Not The End of the World” by Judy Blume

Book Description: Can Karen keep her parents from getting a divorce? This classic novel from Judy Blume has a fresh new look.

Karen couldn’t tell Mrs. Singer why she had to take her Viking diorama out of the sixth-grade showcase. She felt like yelling, “To keep my parents from getting divorced!” But she couldn’t say it, and the whole class was looking at her anyway.

Karen’s world was ending. Her father had moved out of the house weeks before; now he was going to Las Vegas to get divorced, and her mother was pleased! She had only a few days to get the two of them together in the same room. Maybe, if she could, they would just forget about the divorce. Then the Newman family could be its old self again—maybe. But Karen knew something she didn’t know last winter: that sometimes people who shouldn’t be apart are impossible together.

Okay, literary confession time. Before Book Club picked “It’s Not The End of the World”, I had never read anything by Judy Blume. I don’t really know how I missed that, as I was almost certainly in the target demographic of her books, and I know that various classrooms at my grade school had her books on the shelves. But this was my first experience with Blume, so I was glad that one of our members picked it! I know that Blume is a queen of kid lit, so finally reading one of her books seemed far past due. Unfortunately, I didn’t enjoy “It’s Not The End of the World” as much as I thought I would.

I do want to say that first and foremost, I definitely understand the significance of a book about divorce being written in 1972. Especially a book that shows how toxic and terrible an acrimonious marriage and split can be for a family, without the promise of a happy moment of Mom and Dad reuniting because they do still love each other. As the 1970s brought more lenient social mores and changing ideas of values, divorce became more commonplace, and I think it’s so important that kids going through such a thing had a book like “It’s Not The End of the World” to turn to. It’s important to be able to see yourself in the media you consume, and so kids who had to go through that having this reflection of themselves and a reassurance that it is, in fact, not the end of the world, must have been resonant. On top of that, it was very easy to read and Blume’s skills as a writer are on full display.

But all that said, I think that now that more books have been written about divorce as time has gone on, they would be better options to explore than this book. I thought that a lot of the characters were two dimensional, including Karen who seemed quite a bit younger in her voice than the twelve year old she was supposed to be. On top of that, every single adult in this book was just awful, and while I think it’s probably pretty realistic that parents going through this kind of thing won’t always be on their best behavior, they were almost flat out abusive. And it felt to me like this was almost excused by Blume, or at least written off as typical and what to expect from divorcing parents. I don’t know what the 1970s were like, but this seemed unrealistic and histrionic.

I get and appreciate “It’s Not The End of the World,” but I don’t think it holds up as well as I’m told other Blume stories do.

So I’ll try to keep my half of this review from just repeating everything Kate said. But somehow, even though we grew up in completely different states and both loved books obsessively, I, too, missed the Judy Blume train. Part of this I think has to do with the fact that I was pretty solidly a genre reader from the get-go and my forays into contemporary fiction have always been few and far between, even as a kid. The only other Blume book I read was “Forever” and that was just because I was assigned it in library school (Kate and I were in this same class, but she wisely chose a different book option for this assignment.) I didn’t particularly enjoy that book. So it was with some skepticism that I started this book, knowing that I hadn’t been the target audience pretty much ever and didn’t loved my only other experience with her work. And, alas, it held true here.

Like Kate said, this book definitely had its time and place, and there’s no arguing with the general popularity of Blume’s work with many middle graders. Still today libraries circulate many copies of her more popular stories. That said, I think this one shows its age and in ways that make it particularly less approachable to modern kids reading it than others. Books dealing with how kids deal with divorce are still needed today, but this one’s approach is heavily cemented in the idea that Karen is experiencing a socially rare event, one that is distinctive enough from her peers’ experiences that she stands out. Not only are attitudes around divorce markedly different than they were in the 70s, but it is simply common enough that Karen’s situation wouldn’t have likely made her stick out in a crowd.

Beyond this, the adults in Karen’s life are almost uniformly letting her down in massive ways. So much so, that at times both parents read as cartoonish in their villainy. There are also elements in their parenting strategies that would fall under a much harsher lens than they might have at the time this was written. Like Kate said, their actions in today’s views could be seen as borderline abusive. But the parents weren’t the only one-dimensional characters. Sadly, I didn’t connect with Karen at all either. She felt largely like a stock character around whom this “afternoon special: divorce!” topic was being framed.

I see how Blume’s work can be highly readable, as I did manage to get through the book quickly. But between this book and “Forever” (a book where I had a lot of similar complaints, particularly around the flat characterization), her writing is definitely not for me. I’m hesitant to throw a beloved author for many under the bus, but…I ain’t seeing it. With this topic specifically, I think there are better books being written now that I would direct readers to before this.

Kate’s Rating 6: Definitely an important work for it’s time and honest in many ways, but now it feels a bit over the top with histrionic moments and pretty two dimensional characters.

Serena’s Rating 5: More interesting as an artifact representing a very different time period with regards to divorce than as an actual story.

“It’s Not The End of the World” is included on the Goodreads lists “Coming of Age Stories”, and “Books for My Eleven Year Old Self”.

Find “It’s Not The End of the World” at your library using WorldCat!

One thought on “Book Club Review: “It’s Not The End of the World””