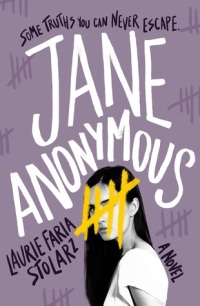 Where Did I Get This Book: I was sent an eARC by the publisher via NetGalley

Book Description: Bestselling author Laurie Faria Stolarz returns with Jane Anonymous, a gripping tale of a seventeen-year-old girl’s kidnapping and her struggle to fit back into her life after she escapes.

Then, “Jane” was just your typical 17-year-old in a typical New England suburb getting ready to start her senior year. She had a part-time job she enjoyed, an awesome best friend, overbearing but loving parents, and a crush on a boy who was taking her to see her favorite band. She never would’ve imagined that in her town where nothing ever happens, a series of small coincidences would lead to a devastating turn of events that would forever change her life.

Review: Thanks to Wednesday Books and NetGalley for providing me with an eARC of this novel!

In so many books the involve missing people or missing women, if the missing person is found alive and is able to return home that is usually the end of the book. The investigator is a hero, the victim gets to return to their life, and the story is considered to be happy, or at least positive. But the truth of the matter is that in real life, anyone who survives a harrowing and violent experience such as that has a lot more story to live and tell after they are rescued or recovered. And “Jane Anonymous” ventures to examine that concept, that the ‘happy ending’ isn’t necessarily guaranteed, and that the fallout of the trauma isn’t easily reconciled with the joy of returning to one’s life. Is it a rough book because of it? Hell yes. But it’s a theme that I haven’t encountered as much as I have the ‘happily ever after’ conclusion in stories like these.

“Jane Anonymous” is told through two timelines. The first is Jane’s time directly before and during captivity. The second is Jane’s life in the weeks and months after she escapes, and how she is coping after her trauma. Both of them create an entire story labeled as ‘Then” and “Now”, and it’s told as though Jane is writing down her experiences as a way to try to make sense of everything. Stolarz is vague about the details of setting, as Jane not only refers to herself as Jane Anonymous, but she also says that she’s living in ‘New England Town’ so the reader can feel like this could be a number of places. We juxtapose what happened to her in captivity along with how she is functioning back in her life with the trauma of it, and it’s honest and raw and very tense. Stolarz does a very effective and believable job of conveying just how the trauma would effect a person who was held in a small room all alone for seven months, and how coming back to her old life is going to be incredibly difficult. I thought that coping mechanisms and panic attacks and PTSD symptoms were portrayed convincingly, and also thought that the strain on not only Jane’s experiences but also the experiences of those that love her was also very well done. The ‘Now’ sections were almost harder to read because the idea of being ‘home’ is so dismantled and examined, and Jane and her family are still in such turmoil. It reminded me of the book “Room”, but tackled more head on since it wasn’t through the eyes of a little kid who can’t comprehend what happened. Jane comprehends. And therefore we are forced to.

The ‘Then’ sections read more like a traditional thriller, and while it was indeed suspenseful there were parts of it that were predictable. While it’s a foregone conclusion that Jane is going to escape, Stolarz does attempt to create a tension about how she is going to do it. The thing that sustains her is Mason, the voice in the vents who says he’s also been captured by the same lunatic. As Jane and Mason cling to each other and their relationship is all that can sustain her, you see how having one person there gives Jane the strength that she needs, and seeing he determination to survive is definitely a compelling part of these sections. That said, there are a couple of twists that I called pretty early on, and I’m not sure if that’s because they weren’t hidden particularly well, or because I have just read so many books like this that I know what to look for, trope wise. That said, it wasn’t like that ruined anything for me when it came to the story. It may have been the weaker of the two time frames, but it was still highly enjoyable.

“Jane Anonymous” doesn’t pull any punches when it comes to showing the fallout of trauma. It’s honest and upsetting, but also pulls at the heartstrings as you see a girl try to begin to heal, as hard as it may be.

Rating 7: An emotional and at times a little predictable thriller about having to rebuild your life after a horrible trauma, “Jane Anonymous” was both suspenseful and moving.

“Jane Anonymous” is new and not on many relevant Goodreads lists, but I think it would fit in on “Kidnapped!”.