Kate will mention this below as well, but when you’re stuck home with an infant who at best is not up on their conversation skills and at worst….well, let’s not go there, you definitely need a good, fairly mindless show to get you through the long days. And for the last month or so, “Suits” has been my go-to. I started it several years ago but had burned out after the first couple of seasons. I confess: I really hate the character Mike, who is one of the main leads. But now that the show was done, and I knew Mike would be off the show altogether for the last two seasons, it was a great time to go back. Like “West Wing,” I can pretend all day long that I was there “for the story,” but really I was just there for the Donna/Harvey relationship, similar to the Donna/Josh one (what is with the name “Donna” in these very similar relationships??). The show definitely slid into a rather soapy, drama-fest towards the end with very little legal action to be had, but I still enjoyed the heck out of it. But man, Mike, still hate that guy. 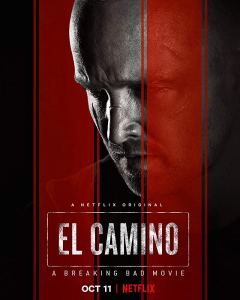 While I ended up liking “Breaking Bad,” I did struggle through it. There’s no arguing with the quality of that show, but I have a hard time with shows/books where there are very few people to root for. Jesse was the obvious exception, but it was all the more hard to watch terrible things happen to him as the one really good character. Thus, for me, the thing that really stands out about this movie is that it seemed to be almost the exact story that most people probably had in their own head-canon for what happened next for Jesse. He struggles, but due to his own particular skills with people and the relationships he has, he makes it through. I also really liked the greater insight into what his time had been like while a prisoner in “Breaking Bad.” There were some great cameos and it ends on a hopeful note. 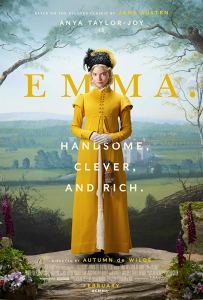 As you will soon see, this year I have even more of an interest in all things “Austen.” Not that I wouldn’t have been over the moon about any new adaptation at any point. “Emma,” it seems, is the Austen story of choice for re-makes, tending to be re-made far more often than any of the other stories. I think there are two reasons for this: 1.) Other than “Pride and Prejudice,” it’s the best known and has one of the most appealing leading ladies and heroes 2.) “Pride and Prejudice” has almost been doomed by the fact that a perfect version was made in the 90s and no one wants to try to top it (I have strong feelings about the Kiera Knightly version, and I think the fact that it hasn’t been re-made since only supports my point). Watching this trailer, I’m a bit concerned about the seeming lack of age difference between Knightly and Emma. I know this is a hard line to walk with modern audiences, but I think the Johnny Lee Miller version that came out about 10 years ago was a good example to follow. Either way, I’ve already informed my husband that going to this movie is what I want to do for a late Valentine’s Day. 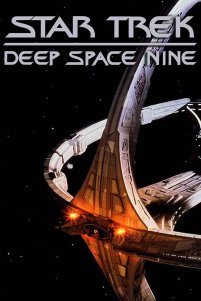 Sometimes when you don’t have much opportunity to leave the house due to an infant, you just have to find something easy to binge. My choices for easy binging were “Star Trek: Deep Space Nine” and “Star Trek: Voyager”. While “DS9” deals with the struggles of diplomacy and the

cost of war, “Voyager” is a classic lost in space story. I had watched both series on and off with my parents while they were airing, but going back and doing a rewatch of both seemed to be the perfect choice for long days of baby care. I watched “DS9” until it got too dark, then switched over to “Voyager” for some kinder, gentler hijinks. Both series have compelling characters and interesting plot lines, and while “DS9” is dark and serious at times, “Voyager” is a little soapy and light. Both are fun escapes!

Words cannot express how impatiently I have waited for the new “Wonder Woman” movie! DC films have been pretty hit or miss in the past decade, though I will admit that perhaps they’ve found their stride with fun flicks like “Aquaman”, “Shazam”, and the upcoming “Birds of Prey”. But there is no denying that “Wonder Woman” is absolutely the best of the best, and I have high hopes for “Wonder Woman: 1984”. The trailer looks promising. Bright colors! An 80s aesthetic! The return of Steve Trevor! “Blue Monday” by New Order! Gal Gadot is still absolutely perfect as Diana as far as I can see, and I fully believe that Patty Jenkins is going to bring the fun and girl power to this next movie. This trailer raises questions: How did Steve come back to life? What is Pedro Pascal’s Maxwell Lord up to? Why does Diana have her golden eagle armor? I don’t know how I’ll wait until June to find out! 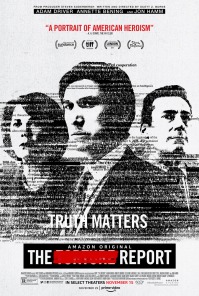 I was solidly in late high school and college during the Bush/Cheney years in this country, and I was in a rage about that administration basically all the damn time. I’ve found myself falling into the trap of ‘man those were the days’ when comparing our present administration to then, but boy, “The Report” reminded me that I mustn’t look back with longing. “The Report” is a film about the investigation and compilation of the horrific torture practices that the CIA implemented towards detainees during the ‘War on Terror’, and how the final report almost didn’t come to light because of political shenanigans and CIA intimidation. Adam Driver is stellar as Dan Jones, a Senate Staffer selected to lead an investigation into the highly suspicious destruction of a number of CIA tapes that had hours of prisoner interrogations. What he found was the cruel and despicable treatment that United States allowed against these prisoners, and he fought to make sure the truth was exposed. It’s upsetting, and fantastic, and everyone in the cast, from Driver to Annette Bening as Senator Feinstein to Ted Levine as John Brennan to MANY MORE, deliver powerful performances. This movie will make you rage, but it’s also important to acknowledge the terrible things our country has done in the name of national security.